Become guardians of the names

Palestinians are trying to rip the roots out of Zionism, Israel and Jerusalem; If there was no Temple, there is no Jewish claim to Jerusalem and Israel. 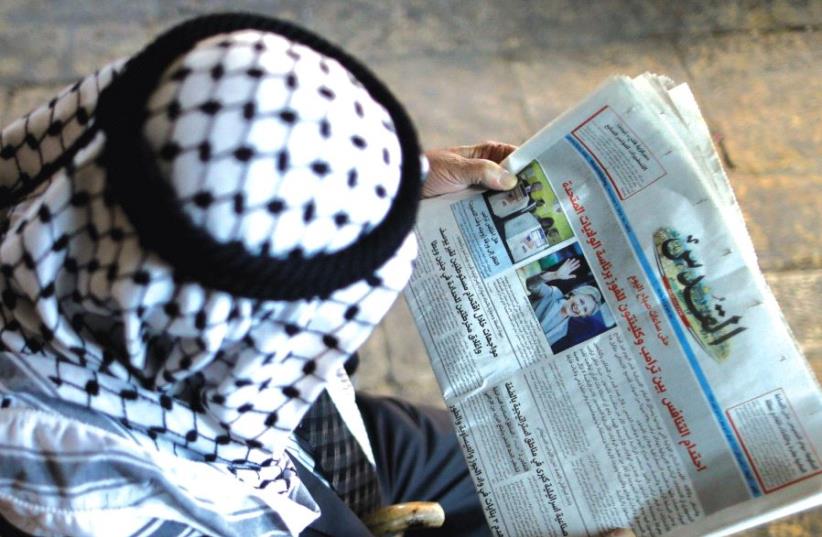 A Palestinian man from Al-Khalil reads ‘Al-Quds’ newspaper.
(photo credit: REUTERS)
Advertisement
It’s all about names and nomenclature. Whoever controls the names and nomenclature controls the idea – controls its future and its past.The Israeli-Palestinian relationship is fraught with explosive terms. The obvious example is the refusal of Palestinian leadership to call Israel the Jewish state. And their refusal to call Jerusalem, Jerusalem.The Arabic and Muslim world refers to Jerusalem as Al Quds, which means The Holy. It comes from the same three-letter Hebrew root as the word kadosh, which also means holy. The day the international community refers to Jerusalem as Al Quds will be the day the momentum shifts away from Israel and toward the Palestinians. And should the world community put Jerusalem on even footing with Al Quds by saying and writing “Jerusalem/Al Quds,” Israel will be in a very difficult situation.The same equation holds true for the Temple Mount which, in Arabic, is called Haram al-Sharif or the Noble Sanctuary.As of today, Israel has the advantage. That’s because “Jerusalem” and “Temple Mount” are English terms, also found in the Christian tradition.Palestinian, Arab and Muslim leaders have begun a serious effort to rename and replace the Jewish/ Israel components of these sites. They know that if they own the terms, they own the history and the future. That explains their constant claim that there was never a Jewish Temple in Jerusalem. It explains Palestinian outrage and media explosions after the statement made by new UN Secretary General Antonio Guterres on Reshet Bet that “it is clear to me that the Temple of Jerusalem was destroyed by the Romans, it was a Jewish temple. As it is [also] clear for me today that Jerusalem is today a holy city for three religions. These are the facts that nobody can deny.”Palestinian Media Watch pointed out that the Palestinian newspaper Al Ayyam used the expression “The Wailing Wall” when writing about extending the high-speed rail line from Tel Aviv to the Western Wall in Jerusalem. Official PA TV took the newspaper to task with the host remarking, “I don’t know how Al-Ayyam can write ‘Wailing Wall’ on its front page, and not even put quotation marks.”It should be absolutely clear that the Wall is a real fact of history. Those who argue or claim that there was no Temple must be corrected. Those who say that there are different versions of history also need to be corrected. They hope to change history to support their political right to Jerusalem and the Temple Mount.The Wall is actually the outer retaining wall of the Temple built by Herod in Jerusalem. Herod expanded the Second Temple, making it truly huge. He used stones which weighed an average of 70 tons each; the smallest weighed in at between 2-7 tons. Large stones weighed 200 tons and the largest of all 600 tons. Herod’s Temple measured about 0.8 km. by a 0.4 km. and stood 11 stories high. It was one of the most impressive architectural creations in history, so big that Romans could not raze it to the ground. All they could do was knock down some of the smaller stones set as the top layer.The Western Wall as we know it is a small section of the outer supporting wall on the western side of The Temple – hence the name. That section of wall was exposed for centuries and still survives today.Many people mistakenly call the Western Wall the Wailing Wall. To do that is not only wrong, but insulting and intentionally degrading. Christians often use the term. The claim is that Jews would go to the Wall and wail about the terrible condition they were in. In Yiddish we would say they shryed, they wept about the past and present. None of that is true. Throughout the centuries it was called the Kotel or Kotel Hama’aravi (the Western Wall). There are many words for “wall” in Hebrew; kotel is just one.Prior to current archeological digs, the Wall was the closest one could get to the Holy of Holies of the Temple. That is the very place where Solomon built his temple and where the second was rebuilt. This is the city King David named as his capital. It was where Abraham bound his son Isaac – known as the Akedah in the Book of Genesis – the great act that Kierkegaard called fear and trembling. The place where monotheism had its birth.The Jewish people, then as now, know that God lives everywhere not in a single place, but the Temple was where the center of ritual was headquartered. Without the Temple there was almost no Jewish ritual.Now Palestinians are trying to rip the roots out of Zionism, Israel and Jerusalem. If there was no Temple, there is no Jewish claim to Jerusalem and Israel.Shakespeare was wrong in Romeo and Juliet when he wrote “a rose by any other name....” For Israel, names are extremely important. We must become guardians of the names.The author is a political commentator. He hosts the TV show Thinking Out Loud on JBS TV. Follow him on Twitter @MicahHalpern.