As China prepares for a huge military parade to mark the 70th anniversary of the end of World War II and the victory over Japan, historical grievances mix with contemporary anxieties.

By ALEXANDER B. PEVZNER 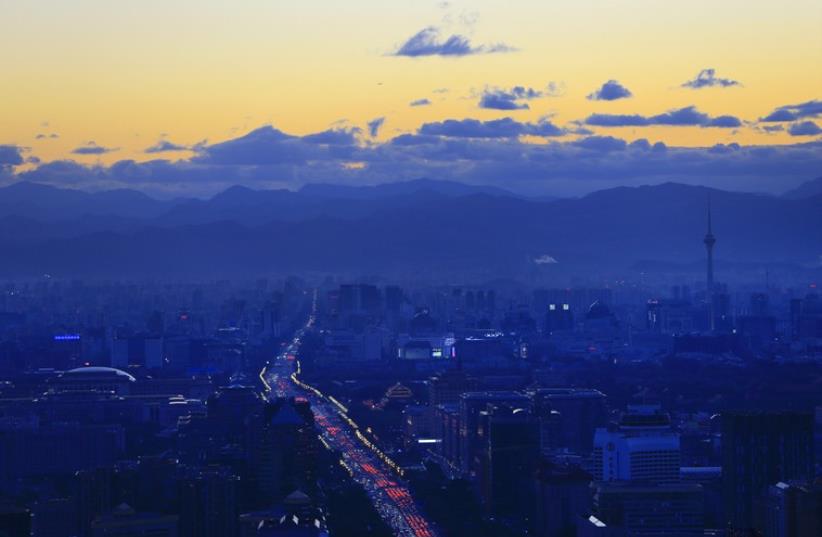 A view of the city's skyline from the Beijing Yintai Centre building at sunset in Beijing
(photo credit: REUTERS)
Advertisement
China will walk a fine line when it holds a huge military parade to mark Victory over Japan Day in Beijing on September 3, balancing its goal of projecting its growing global status with the need to improve ties with Japan and other East Asian neighbors, as well ensuring the success of the coming visit of Chinese President Xi Jinping to the US later in September.Officially termed “Memorial Day for the Victory of The Chinese People’s War of Resistance against Japan,” the military parade aims to project China’s growing status and highlight its contribution to the war effort, but reflects lingering regional grievances from World War II, specifically between China and Japan. In addition to tensions over islands in the East China Sea called Senkaku by Japan and Diaoyu by China, the two countries clash over historical issues related to the war, with subjects such as Japan’s responsibility for the war and history textbooks looming large in the bilateral relationship.A total of 30 foreign leaders will attend the military parade on Beijing’s Tiananmen Square.China was a major contributor to the defeat of imperial Japan and the war against Fascism, but the list of foreign leaders who have accepted the invitation and those who declined unfortunately demonstrates the current regional and global fault lines. For example, Japanese Prime Minister Abe Shinzo was invited but will not attend, citing “difficulties.” Japan worries China will use the occasion of the parade to further press the issue of Japanese guilt for the war in East Asia. (The two countries nevertheless are working on arranging an official visit of Abe to Beijing).South Korean President Park Geun-hye will attend (despite reported pressure from the US to decline), as will President Vladimir Putin of Russia, a close friend of China. South Korea’s official stance regarding Japan’s war guilt is similar to China’s. US President Barack Obama and most European leaders will pass, not keen to be seen on the same stage with Putin at a time of growing tensions between Russia and the West, as well as highlighting concerns over China’s perceived assertiveness in Asia.This military parade is unique in several ways, all highlighting China’s goal, as China’s official news agency Xinhua put it, “to achieve a molding of a patriotic heart, cohesion of a national spirit, and a boost of the strong army resolve.”First of all, this will be the first time China has held a military parade on the September 3 Victory over Japan Day (previously China held parades only on the October 1 National Day), and this is the first military parade since the current Chinese leadership took the reins in 2012. This is also the first time China has invited other countries to take part in such a parade on Chinese soil. In addition to the Chinese military technology display and guard of honor, China will host military parade formations from at least 10 other countries.China faces a delicate diplomatic dance – how to project strength without alarming its neighbors, while also wooing Taiwan, considered a breakaway province by China. Ex-Taiwanese premier Lien Chan, who is also a former chairman of the Kuomintang, or the Nationalist Party (who fought a bitter civil war with the Communists), will attend the parade, despite criticism from Taiwan president Ma Ying-jeou.The presence of both Western leaders and Russia’s Putin, trying not to harm the nascent detente with Japan, and acting as a host to both North and South Korean officials (North Korea’s Kim Jongun will not attend, sending his special envoy Choe Ryong-hae in his stead), guarantee a major headache to the protocol-conscious Chinese.The importance of the parade for the Chinese leadership is also evidenced by the extensive coverage by the local media of the preparations for the parade. At a time where most of the global media’s headlines on China deal with the slowdown of the Chinese economy and the slumping stock market, as far as the Chinese media is concerned there is only one show in town: the parade.China attaches great importance to the questions of how to remember the war and issues of guilt, as can be seen from the senior delegation from the People’s Daily that recently visited Israel. Led by the Middle East bureau chief of China’s most important newspaper, the delegation focused on the 70th anniversary of the war and Holocaust education, visiting Yad Vashem and Beit Theresienstadt in Emek Hefer, among other places. The People’s Daily will also run a special 70-page issue for the 70th anniversary.It is indeed a tragedy that even 70 years after the end of the most horrific war in human history, most of the world cannot unite in a common celebration of the defeat of Fascism.The US and China cooperated extensively during WWII. China has contributed greatly to the Allied war effort, and could once again play the role of a common ground between East and West.The author is the founding director of The Chinese Media Center (CMC), at the School of Media Studies of The College of Management Academic Studies, Rishon LeZion, Israel.