I wonder if Netanyahu would have accused Begin of “ethnic cleansing” for ordering the removal of all Israelis from the Sinai. 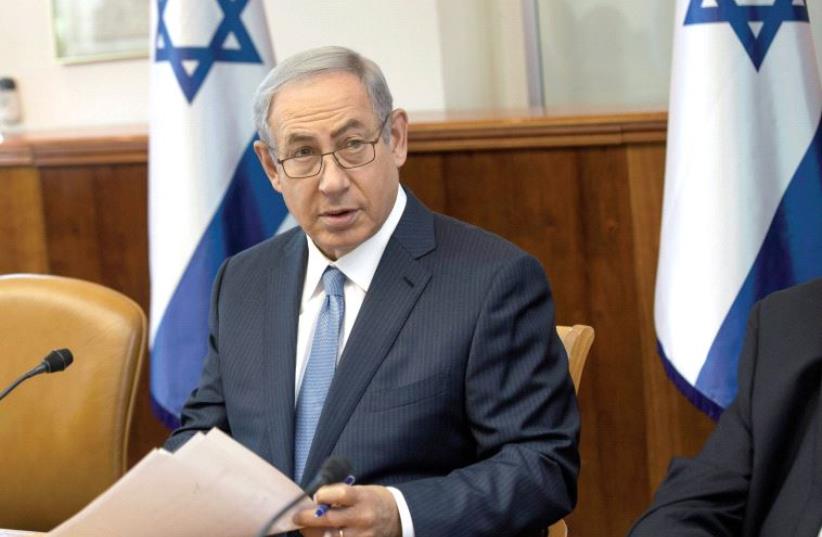 DOES PRIME MINISTER Benjamin Netanyahu believe in peace? Maybe not.
(photo credit: REUTERS)
Advertisement
Benjamin Netanyahu has invited Mahmoud Abbas to address the Knesset to share his vision of peace, but it will never happen, to the relief of both men.It was a trap set by the prime minister, and Abbas walked right into it.Netanyahu said they should meet “instead of speaking past each other,” but a Palestinian spokesman quickly rejected the offer as a “new gimmick” and a bluff.Abbas instead called for the international community to exert more pressure on Israel and establish the Palestinian state without the inconvenience of negotiations with Israel or Netanyahu, which he considers a waste of time. In the meantime, he said, the United Nations should “provide international protection for the Palestinian people,” who are now waging a knife intifada.The two leaders, with good reason, don’t trust each other and question the other’s motives and sincerity.Netanyahu offered to go to Ramallah, seat of Abbas’ government, to present his vision of peace to the Palestinian parliament, knowing it hasn’t convened in nearly a decade and many of its members are in Israeli prisons.Was this invitation really an attempt to revive the comatose peace process or a PR ploy? Some, particularly in the Israeli peace camp, say Netanyahu was really talking to US President Barack Obama, saying, “See, I’m really trying to make peace so don’t muck it up with some speech or UN resolution after the American election.”Netanyahu probably intended to remind people of the historic visit to Jerusalem of Egyptian president Anwar Sadat on November 19, 1977, ending decades of war and opening the door to peace.Within a year the two old enemies signed a peace treaty and all Israelis ultimately left the Sinai, even though not long before Sadat’s visit prime minister Menachem Begin had vowed to retain the peninsula and even bought a retirement home there.(I wonder if Netanyahu would have accused Begin of “ethnic cleansing” for ordering the removal of all Israelis from the Sinai.) If Abbas really feels Netanyahu is bluffing, he should call him on it. As one American politician likes to say, what have you got to lose? By calling Netanyahu’s bluff Abbas could dramatically alter Israeli public opinion with a message of reconciliation, recognition and respect. If the prime minister turned him down, the world would know all his talk about peace is just that, all talk.Abbas’ audience, if he chose to address the Knesset, would be the most powerful force in Israel, even more powerful than the right-wing rejectionists Netanyahu has stuffed into his cabinet: the Israeli voter. The Israeli public is far more supportive of peace and the two-state solution than its prime minister, who only talks about it, but they need to be convinced there is a serious partner on the other side.It’s not just the stabbings on the streets but the incitement in the schools, the media and the mosques of the West Bank, incitement that comes from the very top.Abbas made that clear in his UN speech, which only reinforced the Israeli hardliners.He called on the United Kingdom to apologize for the 1917 Balfour Declaration calling for the establishment of a Jewish homeland in Palestine. Britain, he said, should accept its “historic, legal, political, material and responsibilities” for “the catastrophes, miseries and injustices that it created.”The establishment of the Jewish state was a “heinous” crime against “a peaceful people” who “never attacked anyone or partook in a war against anyone.”He called on the UN to “declare 2017 as the international year to end the Israeli occupation of our land and our people.”He falsely claimed it was the Jews who rejected the 1947 Partition Plan dividing the land into two states, one Jewish, the other Palestinian. In fact, it was the Arabs who rejected it and invaded from all directions in a war to wipe out the nascent Jewish state.Now, unbelievably, Abbas told the UN that Israel should turn over all the land it won in its 1948 War of Independence beyond the partition lines.Abbas has no intention of speaking to the Knesset.He is focused on delegitimizing Israel and mobilizing international pressure to force it to withdraw from the West Bank and accept other conditions.The trouble with that strategy is it won’t work and is producing a weariness with the conflict in the Arab world, Europe and America.Abbas complained of a “weak” Arab world abandoning him.Encouragement for Abbas to accept Netanyahu’s invitation came from an unusual source: Saudi Arabia.An editorial in the Saudi Gazette said Abbas was too quick to reject the opportunity, which it called “reminiscent” of Begin’s invitation to Sadat.In a similar vein a senior Egyptian intelligence official was overheard in a telephone conversation mocking Abbas as old and stupid, according to the Middle East Eye and The Times of Israel.The Egyptian general said Abbas “isn’t smart at all.He doesn’t want to change, he doesn’t want to do anything.”Both are signs of the spreading impatience among Arab leaders and others with what they see as Abbas’s unwillingness to make a peace deal with Israel. It helps explain the quiet but spreading rapprochement between Israel and some Gulf Arab states, including Saudi Arabia.In 1977 two courageous men with a strong sense of history were ready to lead their nations in a new direction.Mahmoud Abbas is no Anwar Sadat, and Benjamin Netanyahu is no Menachem Begin.Instead their people are led by a pair of petty politicians more intent on finding excuses than opportunities.