Can US disrupter-in-chief trigger some progress?

Peace will only come when the reasonable Palestinian majority silences the murderous Palestinian extremists – who usually dominate. 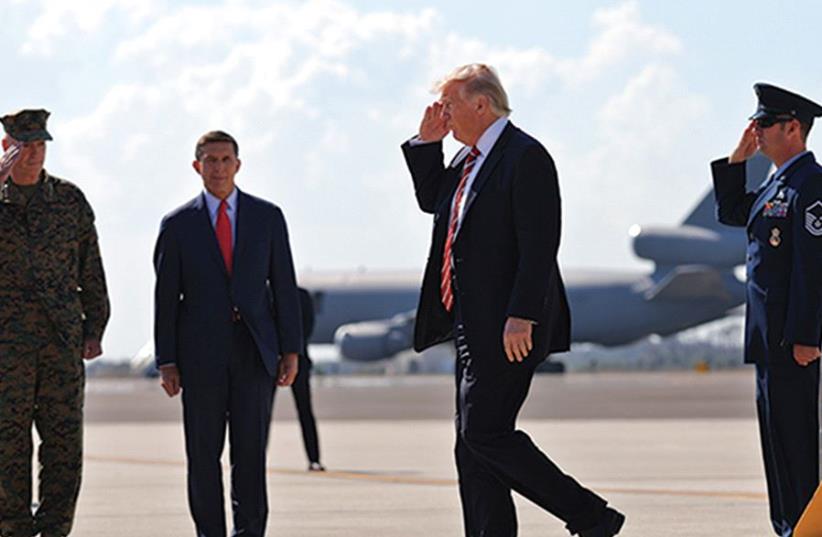 US PRESIDENT Donald Trump salutes as he arrives at MacDill Air Force Base in Tampa, Florida, on Monday
(photo credit: REUTERS)
Advertisement
Prime Minister Benjamin Netanyahu’s first summit with US President Donald Trump probably won’t revolutionize the Middle East. But with America reeling from its disruptive new leader, and Israel recovering from the nightmare of extremists clashing with police officers at Amona, there may be an opportunity for a reset.After eleven years as prime minister, Netanyahu should start taking some risks, to push Israelis – and Palestinians – beyond the status quo. The despicable violence at Amona demonstrates the dangers of kowtowing to a shrill, aggressive minority. There is no excuse for attacking Israeli security officers – these hoodlums should be punished severely. Netanyahu should reduce the absurd million- shekel-per-family bribe he paid Amona’s residents to leave, which didn’t even buy him peace. Some of these funds should be redirected to compensate every security officer who participated in the eviction – doubling the share for the 46 wounded officers. Every Knesset member who respects democracy should endorse a law demanding such adjustments; the settler movement must learn that their violent extremists hurt their cause.By (finally) confronting the fanatic settlers, Netanyahu could strengthen his credibility for a second step: reviving the two-state solution by reimagining it. He should help Israelis accept four realities. First, right-wing Israelis must realize that the Palestinians exist; their national aspirations must be met somehow. Second, a Palestinian state already exists in many ways – the Palestinian Authority controls territories which even the most ideological settlers never enter – because Israeli law prevents them.Third, left-wing Israelis must learn that contiguity is passe. In an age of missiles and instant communication, for a Palestinian people still deeply tribal and even more deeply divided between Hamasistan in Gaza and the PLO’s West Bank kleptocracy, it is time to start thinking Hawaii or Singapore. Palestinians can fulfill their national aspirations through an archipelago of non-contiguous territorial centers, building on the Singaporean model of the thriving city-state. And fourth, culture counts; Palestinians must end incitement, delegitimization, terrorism and rule by dictatorship – they even torture their own people! – while nurturing a democratic culture of mutuality, accountability, non-violence, civil society.The Israeli Left must first accept the last two propositions.If extremists – with what we could call their “faultanalogiphilia,” addiction to faulty, inflammatory analogies – start yelling “Bantustans” and rationalizing Palestinian terrorism as justified given “the occupation,” this challenging plan will die at childbirth. Israelis must reconsider their encrusted positions which sustain an unsustainable status quo. “Palapologists” (i.e. Palestinian apologists) who claim Israelis would never accept such compromises should remember that the Jews accepted the 1947 UN Partition Plan, because “half a loaf” – their cliché – was better than none.After the Israeli debate, the conversation can go global – to the Americans and President Trump; to Israel’s newly-recruited anti-Iranian allies – the Saudis and the Egyptians (thank you Barack Obama); then, finally, to the Palestinians.Abandoning contiguity will correct two mistakes Israelis – and the Oslo peace processors – keep making. The dynamics since the 1990s keep undermining moderates and boosting extremists. By disengaging from Gaza unilaterally, Ariel Sharon deprived PA President Mahmoud Abbas of any credibility for being less fanatic than Hamas and received no concessions or any sense of responsibility from the PA. Hamas declared victory, claiming that terrorism pushed out “the Zionists.” Similarly, Netanyahu should state explicitly: the reduced amount of land Israel is offering, compared to Ehud Barak’s and Ehud Olmert’s more sweeping proposals, is punishment for Palestinian incitement, terrorism and rejectionism.Peace will only come when the reasonable Palestinian majority silences the murderous Palestinian extremists – who usually dominate. Triggering a Palestinian backlash against the Palestinian fanatics for costing them land might reestablish the proper equation. Palestinians must learn: peaceful, reasonable compromises yield positive results; hateful and vicious attacks, verbal or physical, cost them land.Beyond this, Israel’s security needs need addressing. The John Kerry-era conversation about the military presence Israel requires in the Jordan Valley should be revisited.Beyond that, every passenger on every plane taking off and landing in Israel must be confident that no Palestinian with an RPG is waiting on some withdrawn-from Israeli high point overlooking Ben-Gurion Airport to shoot down the jet. Israel must also guarantee that the Palestinians don’t use a renewed peace process and more autonomy to return to the rule-by-gangs that emerged in Yasser Arafat’s terrorist state. Back then, these criminals terrorized their fellow Palestinians indiscriminately while attacking their Jewish neighbors brazenly. Their crimes spilled over into a wave of car thefts in Jerusalem, Kfar Saba and other towns abutting the open, non-security- barriered borders. Palestinian thieves knew they only needed a few minutes to reach their territory and a virtual free pass.In short, Israelis and Palestinians must reexamine assumptions, learn some Oslo lessons, and start adjusting to new realities. Trump’s unnerving leadership-by-chaos might be useful here. The Palestinians – perpetuating their reputation as the world’s brattiest nationalist movement – are whining that the Trump people “don’t even bother to respond to us.” Good. Obama’s indulgent responsiveness toward them only escalated their demands. It’s time to give the Palestinians’ terrorist dictatorship-in-formation tough love and the Israelis’ democratic state some love love. The Saudis and Egyptians are also fed up with Palestinian tantrums and want a recalibrated Middle East.We know in the Middle East how to hunker down in our usual trenches; it’s time for new leadership, new thinking and new openness, among Israelis and Palestinians, the leaders and the led.The writer, professor of history at McGill University and a visiting professor at the Ruderman Program at Haifa University, is the author of The Age of Clinton: America in the 1990s, published by St. Martin’s Press. His next book will update Arthur Hertzberg’s The Zionist Idea. Follow on Twitter @GilTroy.