Throughout history, no other people has held so strongly to the memory of their homeland no matter what country they lived in. 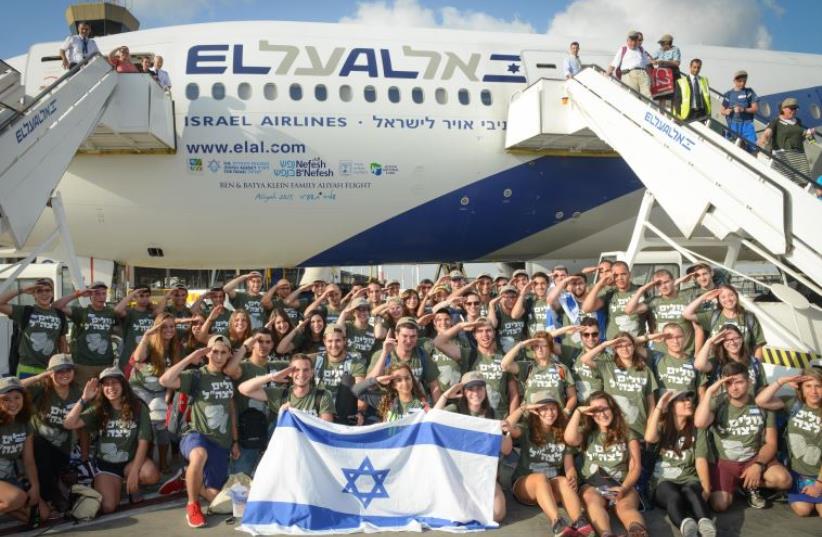 59 lone soldiers make Aliyah on the August 17 Nefesh B'Nefesh Aliyah flight from New York
(photo credit: SHAHAR AZRAN)
Advertisement
I was born in Israel to parents who were also born in Israel. However my grandparents had the merit to make Aliyah to Israel.
Like many who are now reading this article, my grandparents left behind a house, a culture, and a language. Unfortunately, I will never experience the amazing challenge of liberating myself from exile and returning home to the promised land.  I will never deal with the difficulties of learning a new/old language and adapting to a new culture - an integral part of immigration.The phenomenon of aliyah, which means to “arise to Israel,” began nearly 4,000 years ago. Under divine command, the patriarch of the Jewish nation was called to “leave thy country, and thy people, and thy father’s house, unto a land that I will show you” as it states in the book of Genesis. He embarked on a long journey, a journey that has not yet come to an end. It is not at all simple to leave a land of plenty and come to a land that seems lacking. However Abraham’s complete faith in making this huge step has deepened within our people the importance of taking this step ourselves. The essence of our life is here and this is where we can fulfill the aspiration to establish a “model society” as described by the Zionist visionary Theodor Herzl.Throughout history, no other people has held so strongly to the memory of their homeland no matter what country they lived in. With prayer books in front of their eyes, Jews have been praying for thousands of years facing the direction of Jerusalem. Despite not living in the land, Jews have always studied the laws that pertain to the land such as shmittah and the Jubilee year. Every year the Passover seder ends with the words “next year in rebuilt Jerusalem.” The renewed Zionist idea contains two basic concepts which cannot be separated: immigration and resettlement. As Theodor Herzl, founder of the World Zionist Organization wrote, “throughout the long night of their exile, Jews have never ceased dreaming of their kingdom. We read ‘next year in Jerusalem’ throughout all generations. Now the time has come to make that dream a reality.” Yom HaAliyah was formalized as a national holiday in Israel to be marked on the 7th of Cheshvan. However according to tradition, Joshua led the children of Israel into the holy land on a different date, the 27th of Nissan. But it was no accident that the 7th of Cheshvan was chosen to mark the Aliyah Day. It is on this week every year, that we read Parshat Lech Lecha in synagogue on Shabbat. It is in this Torah portion that Abraham hears the divine call to leave the land of his birth and forge a new path to the land of Israel.Yom HaAliyah, or Aliyah Day, reinforces the right of the Jewish people to the land of Israel. This date reminds us that despite the expulsion of the majority of the Jewish people from their homeland nearly 2,000 years ago, they remained faithful to the land throughout their Dispersion. Throughout the generations, our ancestors aspired to immigrate to Israel. Many of us grew up seeing old photographs of immigrants ships, of Jews kissing the ground as they arrived in Israel, and of the Ma’abarot or transit camps with their rows of tents for homeless immigrant families. Immigration to Israel in the days of our parents and grandparents was accompanied by a difficult transition. They came with little material possessions or money and lived in tent cities or development towns. They became a symbol both of the difficulty of making aliyah yet the importance of doing it in spite of everything. With the development of the State of Israel and its prosperity, the procedure of aliyah and absorption has improved beyond recognition. The transit camps were replaced by apartments, poverty was replaced by an Absorption Basket, and language difficulties were replaced by the Hebrew Ulpan system. From refugees of the Spanish Inquisition to those escaping the hardships in Africa and survivors from war-torn Europe steeped in blood, Israel has become the home of the Jewish people from all different walks of life. In this new/old land, we have seen a new generation of scientists, artists, entrepreneurs, military experts, lawmakers, intellectuals, and religious leaders from countless different countries. They are now all part of this innovation nation called the State of Israel where immigrants from around the world share their talents in development, economics, high-tech and medical breakthroughs. There are numerous challenges when it comes to being an immigrant. We must all recognize the importance of both absorption and integration into Israeli society, the removal of obstacles to success as well as maintaining ties with our brothers and sisters in the Diaspora. The State of Israel is looking forward to the continued ingathering of the exiles from around the world, from South America from Australia from Europe from North America from Ethiopia and from all over the world. Today, organizations and movements around Israel are marking Aliyah Day in their own way.  World Likud has chosen to mark this day with an event that unites all immigrants who were touched by the Betar youth movement. Members of Betar young and old, and anyone raised with the teachings of Ze’ev Jabotinsky, learned the value of aliyah. They left behind the culture of their host country, learned Hebrew and arrived in Israel to set down their roots and establish a new generation of Zionist families.As the vice-chairman of the World Zionist Organization, I consider it crucial to continue encouraging aliyah. We must remove any existing barriers for new immigrants and continue to raise awareness among Diaspora Jews with the truth that Israel is my home, your home, and a home for all of us. Happy Aliyah Day!Yaakov Hagoel is the Vice-Chairman of the World Zionist Organization and Chairman of World Likud.