It’s not all bad news for news junkies who don’t have iPhones – there are some great applications out there. 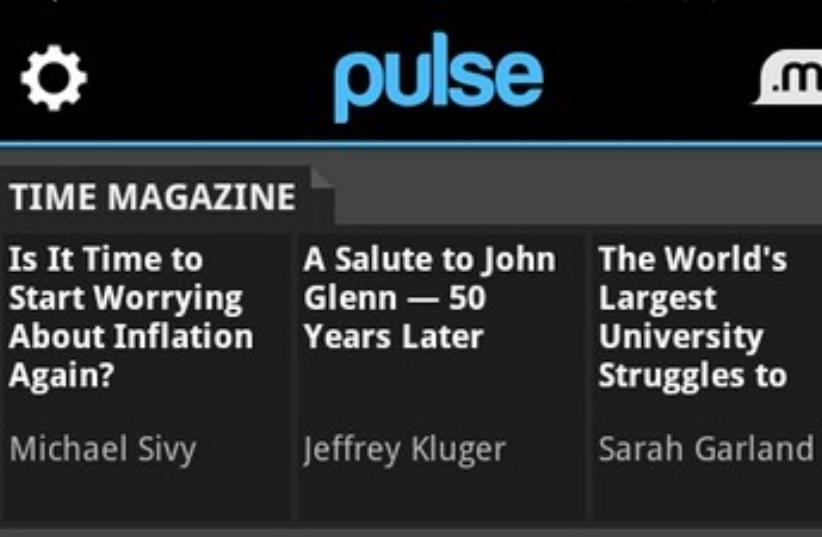 Pulse 370
(photo credit: Screenshot)
Advertisement
While discussing ideas for an upcoming column with family recently, a cousin suggested reviewing an iPhone application called Flipboard. The social magazine app, originally designed for the iPad and released for the iPhone in December, amalgamates content shared on social networks and presents it with an appealing interface. Having seen and appreciated the original version, I whipped out my phone and looked it up in the Android Market. Nothing. While it would be inaccurate to say that this happens all the time, it is definitely frustrating for Android users, especially given the 50 percent market share the Google operating system boasts.But it’s not all bad news for news junkies with Android smartphones. There are some fantastic free apps out there – both directly from news outlets and wires themselves and aggregate apps – and many more in the pipeline. After almost six months wielding the Samsung Galaxy S2, these are my favorites so far.PulseThis aggregate application is definitely my favorite for when I have a few spare minutes to catch up on articles other than hard news. The combination top-to-bottom and side-to-side strip navigation allows for maximum content display without overcrowding, meaning users can look into the sections and choose as much or as little as they want. The app offers a selection of traditional media outlets, including the likes of Time magazine and The New Yorker and relative newcomers like Epicenter and Mashable, alongside new media sections such as a strip of content shared by Facebook friends, and the latest news videos on YouTube.Another successful feature is the excerpt that each icon links to, followed by a link to the full article. This minimizes issues jumping from app to app, and gives users a taste of the article before booting them out to the host site. AP mobile 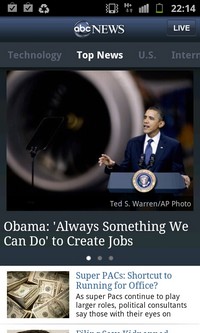 The AP mobile appThe Associated Press mobile application is simply designed, with news categories displayed in a horizontal bar, or masthead, across the top of every screen. Users can customize the app’s front page, choosing which sections will be displayed and how many stories are featured in each. The AP mobile widget is also a happy addition to any news junkie’s phone, though be warned: It has a tendency to chew through the phone battery. Set it to update manually (by tapping the refresh symbol on the widget) for a happy medium.Though not essential for keeping up with the news, inputting your postal code on setup will pull up local weather, and the app also has nicely integrated Facebook and Twitter elements.Time mobileTime magazine’s Android app has received many glowing reviews in the US; one quick look and it’s not hard to see why. Individual categories, ranging from hard news to interactive sections such as most-read and most-shared, are displayed both in a sideways scrolling masthead and a smooth drop-down menu.The big draw card is definitely the quality of Time’s content – nothing new here. The drawback is the fact that it’s a bit heavy on the images which can make the app slow to load. 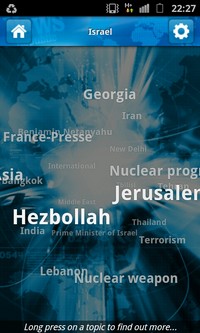 The News Republic appNews RepublicThe News Republic aggregate application accumulates mainly news wire pieces, making it a fitting tool for reporters and editors. It has a fantastic “related news” function, giving users the option to jump smoothly from one term or topic to another, Wikipedia-style. This functionality, dubbed TagNav, also provides a “tag bubble” for every topic which is pretty but to be honest, fairly useless.The share features on this app are up there with the best, in terms of both social media and email. Check out the hashtag function especially for Twitter. The GuardianLike The Guardian’s website, the British daily’s app boasts a clean, easy-to-read layout which aptly features both hard and soft news. Users can choose which sections interest them most and which order they want them to appear in.The home screen is long and clear, and sections run horizontally, apart from the multimedia section which has a unique layout with a sideways scroll function.Again, the big draw card here is content, but the design succeeds in showcasing it well. If you like reading The Guardian on your computer then you’ll enjoy this app.ABC News

The ABC News appABC has put together an app with a simple but elegant design, with an excellent one-tap move from text to video. The sideways scrolling navbar across the top allows users to find what they’re looking for quickly and easily.Each section features three stories at the top with a nice big picture. In short – it loads fast and it looks good. The Huffington PostThe Huffington Post app’s design mimics the parent website’s distinct branding in a mobile-friendly format. The customizable sideways scrolling masthead allows for maximum content display without overcrowding, allowing users to flip through Huffpost’s long list of sections including Politics, World, Religion, Weird News and Divorce and select the order that interests them most.One of this app’s main achievements is the way it has converted content intended for desktops and laptops such as pictures, videos and slideshows into a mobile format which loads fairly quickly and looks good on the small screen.Ynet (He 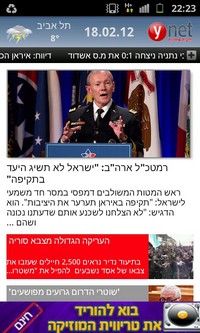 The Ynet appbrew or English)Last but not least, the best Israeli news app. It’s pretty simple – if you like Ynet, you’ll like the Ynet app. The advantages on Android are the same as those on the website – it’s fast, it’s clear, and it always seems to strike the balance of news and entertainment that sucks Israelis (and wannabe Israelis) right in.The weather icon at the top of the home screen uses GPS to give you updates for your location, and the news ticker loads quickly and smoothly. Like the site, the design doesn’t really do it for me, but it works.These reviews all point to the same thing: News apps should be simple, load quickly, avoid overcrowding and stick to the same design philosophy as the parent site where relevant. If Web users skim, mobile users super-skim, which means striking the right balance of text and pictures is crucial to whether or not the eye can move smoothly down the screen.The writer is The Jerusalem Post’s Internet desk manager