This attitude can result in apathy toward the idea of being part of a people at best, and cold hostility towards one’s Jewishness at worst. 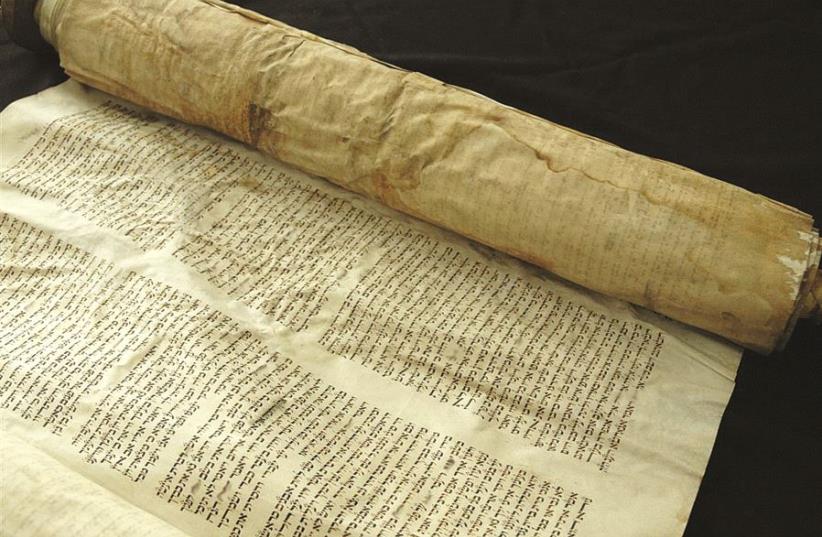 Un sefer Torah vieux de quatre siècles, trouvé dans un chantier en 2006
(photo credit: DR)
Advertisement
Igniting Jewish engagement today has become difficult. Disagreements are becoming sharper and the tendency is often toward extremes, whether it be in relation to religion or Israel and its actions. Can we resist these tendencies, creating strong communities that celebrate difference and are enriched by disagreements? The trends are pushing us in the opposite direction. The Western world has largely been in the grip of a strong form of individualism: group identity is regarded as passé and the ultimate good is the self-realization of the individual.This attitude can result in apathy toward the idea of being part of a people at best, and cold hostility towards one’s Jewishness at worst.Yet, while individualism as a credo has brought important advances, it has also led to increasing loneliness and alienation.The question we all face is: what are the sources of meaning in my life? The answer often given in the modern world has been a hollow consumerist one. The latest gadget may fascinate us for a few hours but has little to offer to our sense of meaning.In the face of this emptiness, we have seen competing extreme identities arising, including among some Jewish groups, offering to replace the uncertainties of our world with absolute religious or nationalist truths. These movements offer followers a sense of meaning but, usually, do so by closing ranks, looking inwards and, usually, denigrating those who are different. Nuance and complexity are sacrificed on the altar of a simple, veritable credo.In the face of these poles, an alternative must come from those of us who celebrate both the value of community and individuality. These should not be seen as polar opposites: coming together in community enables us to experience both challenge and connection that enriches our individual lives. Communities – even insular ones – are of course made of individuals who always must, of necessity, differ: embracing diversity thus should strengthen rather than weaken community. Practically, then, how can we go about establishing a modern Jewish identity that embraces these twin dimensions? Many across the Jewish world have been grappling with this question. One organization, known as Limmud, has since the 1980s developed and experimented with a powerful model that has since resonated with people in 42 countries around the world. Limmud’s success, in my view, can be attributed to a number of ingredients which, together, give expression to certain foundational features of modern Jewish identities.At the outset, Limmud events are committed to multiplicity: Jewish identity is not conceived of as purely religious, national or cultural. Instead, participants are offered the opportunity to engage with content which ranges from examining ancient religious texts to debating complex philosophical and political problems with knowledgeable panels; from learning how to make Jewish cuisine to dancing workshops and musical performances. This richness perhaps gives expression to Mordechai Kaplan’s famous idea that Judaism is not a religion or a nation alone but a civilization: that understanding ties in well too with the modern sensibility that, as individuals, our identities are multiple and complex – one moment I may wish to plumb the depths of Talmud and yet in the next concoct creative Jewish melodies.This multiple array of options is conjoined with an empowering ethos offering individuals the choice to construct their Jewish experience and identities in the way they wish. Building Jewish identity on the basis of external threats cannot provide a compelling answer in the modern world as to why to remain Jewish. Limmud, in its essence, seeks to enable individuals to find positive content to Jewish identity that resonates with them.As such, Limmud’s mission statement is deliberately open: “Wherever you find yourself, Limmud will take you one step further on your Jewish journey.” Underlying this vision is a deep commitment to the autonomy of the individual – a cornerstone, of course, of liberal societies but also a notion that has deep Jewish roots.However, Limmud seeks to harmonize the power and capacity of the individual with the centrality of community. Its vision is of a community without conformity: a space in which the diversity of Jewish identities is actively celebrated and disagreements seen as being “for the sake of heaven.” That is why Limmud goes out of its way to be an inclusive space that caters to as wide a Jewish tent as possible. Such a community can only flourish if we all are committed to the central value of respect for one another, even where we fundamentally disagree with the other’s chosen path.The community-orientated values of participation and responsibility, too, are central to the organization and its events, which are run predominately by volunteers. It is important that the community we create is not built by others, but something we build and develop ourselves.Limmud also embraces and embodies a spirit of innovation: its bottom-up and relatively flat structure enables experimentation. Local advances can be translated into global transformations through the power of the network between grassroots groups.Can a model such as Limmud succeed if we are to avoid the twin perils of indifference and extremism? Its success – and those of other organizations like it – will determine whether we can build an inclusive Jewish community comfortable with individual difference which captures the depth of our past, and offers a fresh outlook towards the future.

The author is on the Global Limmud board and is co-chair of Limmud Connect: the first Global Volunteer Forum, taking place in Israel this week. He is a professor of fundamental rights and constitutional law at the University of Johannesburg. He writes in his personal capacity.