A bipartisan ceremony in Jerusalem this November, with Mrs. Moynihan attending, would allow Republicans to show the grace and leadership they lacked in May. 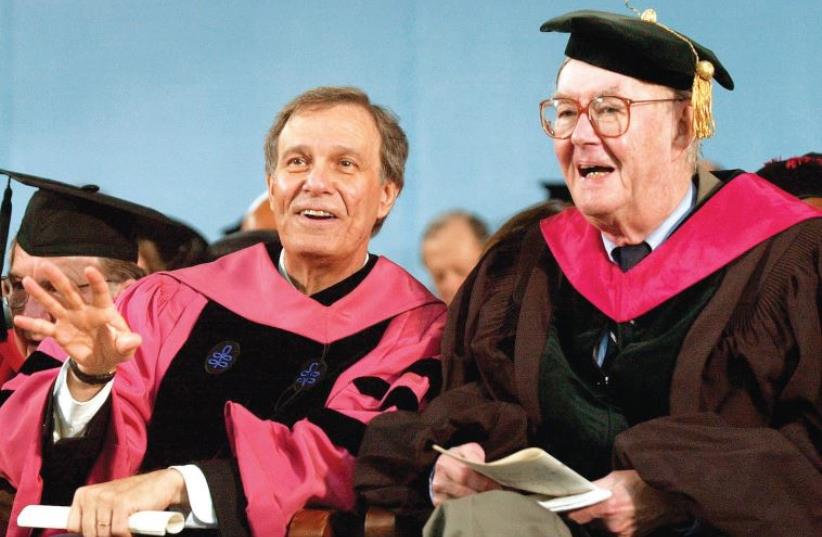 FORMER HARVARD University President Neil Rudenstine, left, and former New York Senator Daniel Patrick Moynihan share a laugh prior to Harvard University’s 351st commencement in Cambridge in 2002
(photo credit: REUTERS)
Advertisement
Tragically, America’s long-overdue recognition of Jerusalem as Israel’s capital has gone from a consensus-builder that most Americans understood as a question of right versus wrong, into yet another flashpoint pitting Left against Right.We must rebuild the bipartisan consensus for Israel’s fundamental right to choose its own capital. It’s essential to understand it as what it is and was: part of a broader fight over Israel’s rights as a nation-state and Zionism’s legitimacy as a nationalist movement like all other nationalist movements.Donald Trumpophobes shouldn’t allow hatred of the president to trump the Jews’ 3,000-year love affair with Jerusalem; Trumpistas shouldn’t allow hatred of the president’s enemies to Republicanize America’s decades-long bipartisan push to recognize Jerusalem.The lopsided guest list at the US Embassy dedication in Jerusalem caught both Democrats and Republicans behaving badly. With no incumbent Democratic officeholders present, America and Israel couldn’t celebrate this achievement as bipartisan.Typically, in our hyper-partisan, obsessively finger-pointing age, each side blames the other. Democrats grumble they weren’t invited; Republicans claim any member of Congress could have joined, but the Democratic leadership banned participation.Both are responsible, although the greater moral burden rests on those in the charge.President Donald Trump and Prime Minister Benjamin Netanyahu should have welcomed Democrats as the partners they were in getting America to defy international bullying and act justly, reasonably.Consider this: Daniel Patrick Moynihan, the late four-term liberal Democratic senator who lobbied so hard for this move, would have been appalled. True, other Democrats, including Hubert Humphrey, George McGovern and Jimmy Carter preceded him in the 1970s in endorsing an embassy move – yes, that Jimmy Carter. Moynihan introduced legislation in 1983, 1988, 1990, 1992 and 1995 rejecting “the absurd suggestion that Israel did not have a right to select its own capital city.”Moynihan was America’s ambassador to the UN when the General Assembly passed the infamous Zionism-is-racism resolution in 1975. He understood that the attempts “to delegitimize Israel came in many forms, none more insidious than the twin campaigns to declare Zionism to be a form of racism and to deny Israel’s ties to Jerusalem.Those who ranted against the ‘racist Tel Aviv regime’ were spewing two ugly lies,” he explained. “Both had at their heart a denial of Israel’s right to exist.”A partisan Democrat, Moynihan fought Reaganomics passionately. Still, he insisted the fight to recognize Jerusalem be as bipartisan as his successful campaign with Ronald Reagan, then George H.W. Bush, to repeal the Zionism-is-racism act in 1991.In the 1990s, Moynihan dismissed Nervous Nellies trying to deprive Israel of the capital-choosing choice every other country enjoys. “It does not interfere with the peace process,” he scoffed, “because there is no scenario in which Israel would agree to relinquish Jerusalem as its capital.”Unfortunately, partisanship has turned so toxic that neither government had the class to host Moynihan’s widow, Elizabeth Moynihan, at the Jerusalem ceremony, or at Israel’s diplomatic receptions in Washington and New York celebrating the move.It was a slight, not an oversight. Moynihan’s longtime aide and brother-in-arms throughout the Jerusalem fight – Dr. David Luchins – suggested inviting Mrs. Moynihan, only to be rebuffed.The – dare we call it – fake news about the embassy move infects history. Luchins shrewdly observed that the Wikipedia entry “United States Recognition of Jerusalem as Capital of Israel” distorts history, reddifying what for decades was a red, white and blue, all-American move demanding basic equity.The entry hijacks history in service of a too partisan, all-Republican, Trump-oriented narrative: Moynihan, McGovern, Humphrey, Carter – and Luchins – go unmentioned.FORTUNATELY, THERE’S an easy way to progress (beyond rewriting the entry accurately).Israel should rename the street in front of America’s Jerusalem embassy after Daniel Patrick Moynihan. Next November 10, the 43rd anniversary of Moynihan’s stirring speech defending Zionism against the libelous UN Resolution 3379, the United States and Israel should host parallel ceremonies honoring him and celebrating the bipartisan achievement involved in recognizing Israel’s capital.The street leading to what was just renamed Donald Trump Square, can remain named after the late academic David Flusser. Naming the continuation after Trump Square leading to the Diplomat Hotel “Moynihan’s Way” wouldn’t inconvenience anyone.Alternatively, rename the German Colony street honoring South Africa’s racist Jan Smuts after Moynihan. Either classy act would honor a great friend of Israel, who taught diplomats how to stand tall when defending their country, their allies and democratic ideals.A bipartisan ceremony in Jerusalem this November, with Mrs. Moynihan attending, would allow Republicans to show the grace and leadership they lacked in May. It would allow Democrats to show the patriotism and good judgment they lacked then, too. It would allow Americans, from Left to Right, to celebrate the remarkable friendship between their country and Israel in this, Israel’s 70th year. And it would demonstrate that America’s historic bipartisan support for Israel has not only been a gift to Israel, but a gift to America, too. Healthy democracies need some issues on which both parties agree.Coming four days after what will undoubtedly be divisive midterm elections, this diplomatic do-over would provide the kind of bipartisan patriotic moment healthy countries need, regardless of our opinions about our current leaders – or our squabbling parties.And it would teach the history more accurately, emphasizing how supportive Americans from Left to Right have been of Israel’s right to exist and to function equally, with dignity, in the community of nations.The writer is the author of the newly released The Zionist Ideas, an update and expansion of Arthur Hertzberg’s classic anthology The Zionist Idea, published by the Jewish Publication Society. A distinguished scholar of North American history at McGill University, he is the author of 10 books on American history, including The Age of Clinton: America in the 1990s.