In 1932, as a rising star at the Museum of Modern Art, Johnson attended a Hitler Youth rally at Potsdam. 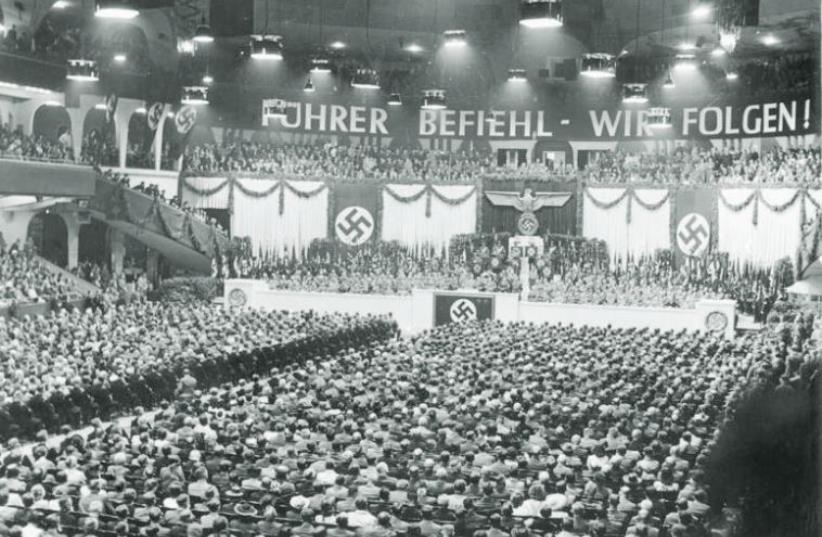 Germans take part in a mass Nazi rally in the Berlin Sports Palace in June 1943
(photo credit: Wikimedia Commons)
Advertisement
This summer saw the Four Seasons Restaurant in Manhattan close its doors for the last time. And Philip Johnson – the architect who created the establishment eatery where the likes of Henry Kissinger daily held court – has once again been the subject of accolades. But while we can regret the ignominious end of the modernist masterpiece, we cannot forget the swindle Johnson has perpetrated on history, for few today fully understand the depths of his past as a devoted Nazi and fascist agitator.In 1932, as a rising star at the Museum of Modern Art, Johnson attended a Hitler Youth rally at Potsdam and was spellbound by the marching bands, Hitler’s oratory and “all those blond boys in black leather.”Upon his return, he organized a group called the Grey Shirts, began collaborating with and financially supporting Lawrence Dennis, known as the “brain of American fascism,” and acquired a Nazi library with works by Kurt Leudecke and Josef Goebbels.Two years later, Johnson resigned from MoMA to offer his services to Huey Long, the Louisiana populist. In short order, he was helping Charles Coughlin – the rightwing priest whose rabidly anti-Semitic and isolationist radio program attracted almost 40 million listeners – produce a Nazi-esque event in Chicago attended by 80,000 people, complete with a 20-foot-high white podium and oversized flags. In 1938, he was back in Germany for the Nuremberg rallies and attending a special Nazi course and the next year he founded a pro-fascist advocacy group with Friedrich Ernst Auhagen, a German national later arrested for fifth-column activities. Johnson also delivered tirades against the British that got a lecture series canceled and even drew up a list of enemies to be eliminated after the revolution – telling his Jewish Harvard classmate Lincoln Kirstein, the future founder of the New York City Ballet, that he was top of the list.As war loomed that summer, an exuberant Johnson decamped to Europe to report for Social Justice, Coughlin’s newspaper (which had recently serialized The Protocols of the Elders of Zion), reporting that a French leadership vacuum “has let the one group get control who always gain power in a nation’s time of weakness – the Jews” and describing shtetl Jews as “a different breed of humanity, flitting about like locusts.” Three weeks after the invasion of Poland formally ignited WWII, Johnson was with German troops at the front as the guest of the Propaganda Ministry. “The German green uniforms made the place look gay and happy,” he wrote a friend.“We saw Warsaw burn and Modlin being bombed. It was a stirring spectacle.”The journalist William Shirer was forced to share a room with Johnson and noted: “None of us can stand the fellow and suspect he is spying on us for the Nazis.” Johnson by then had a thick FBI file (which concluded he was a “rabid Hitlerite”) and was suspected of espionage by naval intelligence.With US intervention looming by 1940, Johnson suddenly realized he was on the wrong side, watching with horror his inclusion as an “American fascist” in Harper’s.Auhagen, Dennis, and other fellow travelers were arrested and indicted. Johnson quickly returned to Harvard, only to see Shirer’s Berlin Diary, which called him a Nazi agent, become a best-seller. Johnson went into panic mode, desperately volunteering for intelligence work only to be rejected as potentially disloyal. His reputation followed him. When a sympathetic professor allowed him on the steering committee of a Harvard civilian defense group, complaints led to his demotion. A former MoMA colleague refused to believe Johnson’s conversion even if he “[s]wore on a stack of bibles that he had changed his opinions.” James Rorimer – the future director of the Metropolitan Museum – told the FBI Johnson was mentally ill and had confided that his architectural ambitions required a dictatorship.Yet after the war, with fascism on the ashbin of history, Johnson went to extreme lengths to cover up his prior activities – and was largely successful, benefiting from help from his friends in the social elite to sweep his past under the rug. The doyenne of cultural philanthropy Abby Aldrich Rockefeller declared of his nearly a decade of Nazi dalliance: “Every young man should be allowed to make one large mistake,” and the art world has followed suit to this day. With time and architectural accolades, the issue faded. When Johnson passed away in 2005, scarce mention was made of his Nazi sympathies and until a recent book by Marc Wortman his Wikipedia entry was noticeably sparse on the topic. On the rare occasions when Johnson spoke of his inconvenient past, he described his politics as a foolish lark and “utter stupidity.” But to the end, Johnson could wax nostalgic that a commission from Hitler would have “tempted anyone” and rave that Mussolini had built more beautifully than the Italian republic. “So let’s not be so fancy pants about who runs the country,” he declared about Il Duce.“Let’s talk about whether it’s good or not.”For good reason Albert Speer described Johnson as the ideal fascist architect.His defenders point to a synagogue Johnson designed in suburban New York and to the nuclear research center at Soreq in Israel as somehow absolving the architect. But Johnson himself never really apologized for his actions, and rather went to great pains to cover up his past. As Elie Wiesel said, “Without memory, there would be no civilization.” While we can shed a small tear for the shuttering of the Four Seasons – we should never forget the hateful views its designer adhered to. He should never be granted his wish to have them forgotten.

The author is an investor and the publisher of The Octavian Report.
Advertisement
Subscribe for our daily newsletter