That is why it is important that the first steps be clearly defined in terms of implementation or lack thereof? 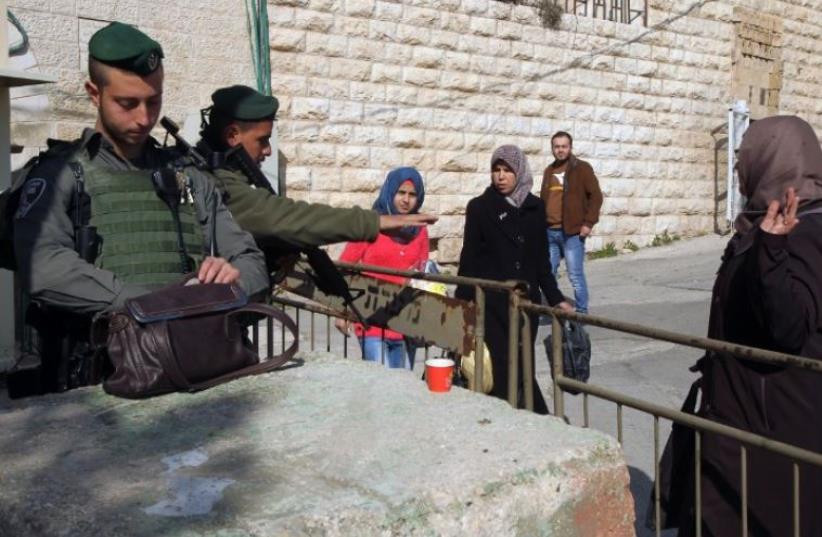 Border Police officers stop Palestinian women to check their belongings at a checkpoint in Hebron
(photo credit: AFP PHOTO)
Advertisement
Prime Minister Benjamin Netanyahu and Palestinian Authority President Mahmoud Abbas have absolutely no trust in each other. The people of Israel don’t trust the people of Palestine and vice versa.There are very good reasons for their total lack of trust – both sides have earned it with honors. The little trust that existed at the beginning of the peace process way back in the end of 1993 disappeared rapidly as a result of expectations which were too high and also, and mainly, as a result of failed implementation of understandings and agreements, by both sides.Part of the problem was in the agreements themselves, which all too often adopted the Kissengerian notion of “constructive ambiguity.” How else could it be explained that in six signed agreements between the government of Israel and the PLO not a single explicit mention of freezing settlement building was made? Even when terms were more explicit, such as in Article X Paragraph 2 of the Interim Agreement from September 1995: “Further redeployments of Israeli military forces to specified military locations will commence after the inauguration of the Council and will be gradually implemented...,” this was later reinterpreted by Israel (under Netanyahu) to mean “security zones” comprising, for example, the entire Jordan Valley.When that agreement was signed, the Palestinians understood that they would receive more than 90 percent of the West Bank prior to beginning permanent- status negotiations; today, 21 years after that (five-year interim) agreement was signed, Israel is still in full control of 62% of the West Bank. Israel failed to meet its obligations regarding withdrawals from territories and the Palestinians did not meet their security obligations of settling all disputes at the table. And there were many other breaches throughout the years, by both sides. It is no wonder why both sides lost faith in negotiated agreements.The trust deficit has over the years turned into a negative trust balance where each side believes that the other side is not only not trustworthy, but can be depended on to intentionally do them harm. Under these terms, it is almost impossible to renew a peace process that could be meaningful. It is clear however that when no negotiations are taking place and the conflicting parties are not talking to each other, changing the negative reality is very difficult. The idea of a future Netanyahu-Abbas meeting in Moscow is good, but without planning some positive outcomes in advance, the prospects of turning the page and beginning anew to rebuild relations and trust are not very good.Often in these kinds of conflict negotiations, a lot of attention is placed on the personalities of the leaders.Improving the “chemistry” between leaders can go a long way. But it seems unlikely that there would be a sudden change in the feelings of Netanyahu and Abbas toward each other. If one or both of them were to be replaced, focus on the “chemistry” dimension might have more value. But right now, we need something else to move the process forward.The best way of rebuilding trust when it has been severely damaged for such a long time is through a process of clear and measurable steps – actions – that each side could perform, with predefined outcomes.These steps or actions should be limited and defined, small tasks at first that are not perceived as too risky for each side, mainly because of their potential domestic political repercussions for both leaders. These steps then become a true test of attitudes and willingness to engage. Positive results would lead to additional steps, negative results would leave us where we presently are.It would probably be best if the specific steps were proposed by the convening host of the meeting that will take place. That will give the convener a stake in the process and a willingness to lend a hand in achieving success. Following successful implementation of those actions, it would be best if the two leaders – Netanyahu and Abbas – were to come up with the next steps. All of this should be seen not so much as a negotiation, and certainly not on the big core issues, but as measures necessary to redevelop a working relationship.That is why it is important that the first steps be clearly defined in terms of implementation or lack thereof.Such a process led to the first US-PLO dialogue. Yasser Arafat was told that if he spoke the magic words of recognizing UN Security Council Resolution 242 and denounced terrorism as well as aspects of the PLO Charter that called for the destruction of Israel, then the US would enter into formal talks with the PLO . At first Arafat fudged it by using a French term “caduc,” meaning null and void, but then the American demanded he be more explicit and direct, and he was. This same kind of “if, then” could be used between Netanyahu and Abbas to get the process moving forward.I could easily propose a list of “if, then” statements, but I think that it is best left in the hands of the Russian conveners, and Netanyahu and Abbas, of course. If the meeting of the leaders does take place in Russia, or anywhere else, it is absolutely essential that it is not wasted solely for a photo-op, or worse – to prove, once again, that the other side does not want peace. Concrete steps with concrete outcomes must be the result of such a meeting.The author is the founder and co-chairman of IPCRI, the Israel Palestine Creative Regional Initiatives.