For Israelis, the traumas of Hebron and Jerusalem epitomize the perceived Palestinian objective of ridding the land, which Jews know as the Land of Israel, of all its Jewish inhabitants. 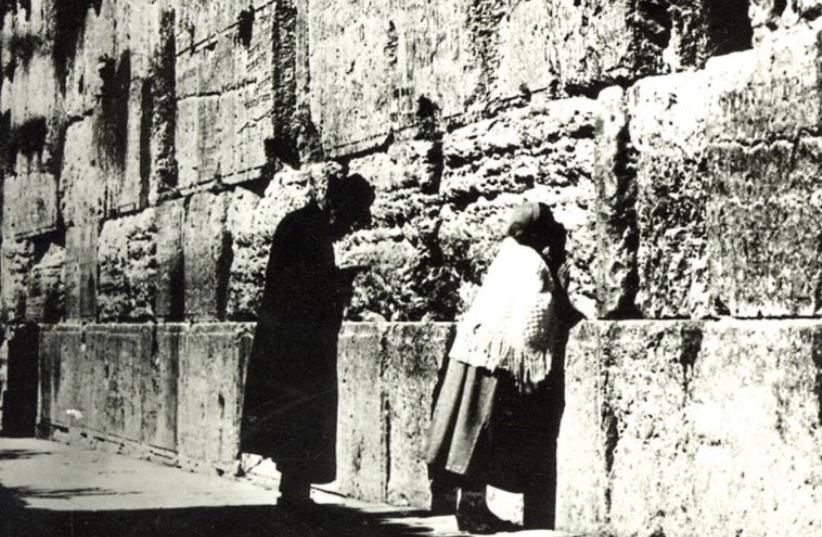 Praying at the Western Wall, then still in Jordanian hands, in January 1967.
(photo credit: JERUSALEM POST ARCHIVE)
Advertisement
The short video that Prime Minister Netanyahu released on Friday on the obstacles, as he sees them, to peace with the Palestinians contained a number of central messages. But the one that got primary attention was his reference to ethnic cleansing – specifically the Palestinian demand that in any agreement, none of the Jews living beyond the 1948 “green line” would be allowed to remain.The condemnation and outrage that followed, from the US State Department, journalists, Knesset members and in social media was intense, and predictable. Netanyahu was accused of pandering to the Israeli Right to shore up his standing in the polls (although the video was in English with Hebrew and Arabic subtitles). US officials repeated their opposition to settlements, and referred to “that type of terminology” (ethnic cleansing) as “inappropriate and unhelpful.”As is often the case, many of the instant pundits and Netanyahu critics missed the context and the substance. In the Israeli historical memory, beyond the Nazis and the Holocaust, the term “ethnic cleansing” brings up images of the 1929 Hebron massacre and the 1948 forced exodus of the Jewish Quarter in Jerusalem’s Old City.Both events remain sources of trauma. In 1929, Arab rioting that began in Jerusalem extended to Hebron – the second holiest city for Jews. Sixty-seven Jewish residents were killed, and the survivors forced to flee. The British forces that controlled Palestine did not provide protection and it was only after the 1967 war that Jews returned to live in Hebron – a priority then and now, 50 years later, precisely in response to memories of 1929.The ethnic cleansing of Jerusalem is even more sensitive and prominent. In May 1948, when the combined forces of the Arab Legion (the Jordanian army) and the local Palestinian militias conquered the Jewish Quarter, they did not disarm the Jewish residents and treat them as residents of occupied territory, in accordance with the Geneva Convention and international law. Rather, all of the Jews were expelled from their homes – every single one.Furthermore, after the fighting ended and the cease-fire was signed, with the “green line” cutting through Jerusalem, the results of the expulsion were not reversed. After a detailed armistice agreement was signed between Israel and Jordan, not a single Jew was allowed to return to the Old City of Jerusalem. Under Jordanian occupation, what remained of the ancient synagogues was systematically destroyed or desecrated.The ban on Jews, which was strictly enforced at the Mandelbaum Gate crossing point between the Israeli and Arab sections of the city, extended to non-Israelis as well. And the UN as well as the world powers, including the US, which had guaranteed freedom of access to sacred sites in the armistice agreement, were nowhere to be seen. The Western Wall, where Jews had gathered for 2,000 years to mourn the destruction of the Temple, was inaccessible.Throughout that period Jews would gather at the eastern edges of Jerusalem – on Mount Zion and the balconies of the King David Hotel – to pray in the direction of the Western Wall. It was as close as anyone could get. It was only with the 1967 war that Jewish Jerusalem became accessible again, and the Jewish Quarter restored.For Israelis, the traumas of Hebron and Jerusalem epitomize the perceived Palestinian objective of ridding the land, which Jews know as the Land of Israel, of all its Jewish inhabitants, as well as of its history and holy sites. This is a real and continuing issue, reinforced by Yasser Arafat in the summit with president Bill Clinton, by Palestinian schoolbooks and Palestinian Authority President Mahmoud Abbas’s speeches, and directly linked to incitement and terrorism. For any hope for peace to be taken seriously, the recognition of Jewish rights and history is essential.In this context, by referring to Palestinian demands as “ethnic cleansing,” Netanyahu sought to preempt the expected push, led by President Barack Obama, for a UN Security Council resolution that would seek to impose terms for an Israeli-Palestinian peace agreement. The text can be expected to be based on the Palestinian victimization narrative, focusing on post-1967 Israeli settlements, which have long dominated European policies and are now part of Obama’s approach.But to be more than a punch thrown at Israel, and in order to have any impact, a UN plan, backed by the US, needs Israeli cooperation to go anywhere. And while dealing with settlements is clearly a necessary dimension of peace, when conditions are ripe, Netanyahu’s video presented the other requirements, at least as long as he is prime minister (and probably for any foreseeable successor). Rather than deriding and dismissing these Israeli concerns, Obama and any other would-be peace makers would be well-advised to pay attention.