It was nearly 15 years ago, in October 2000, that Joseph’s Tomb captured headlines around the world. 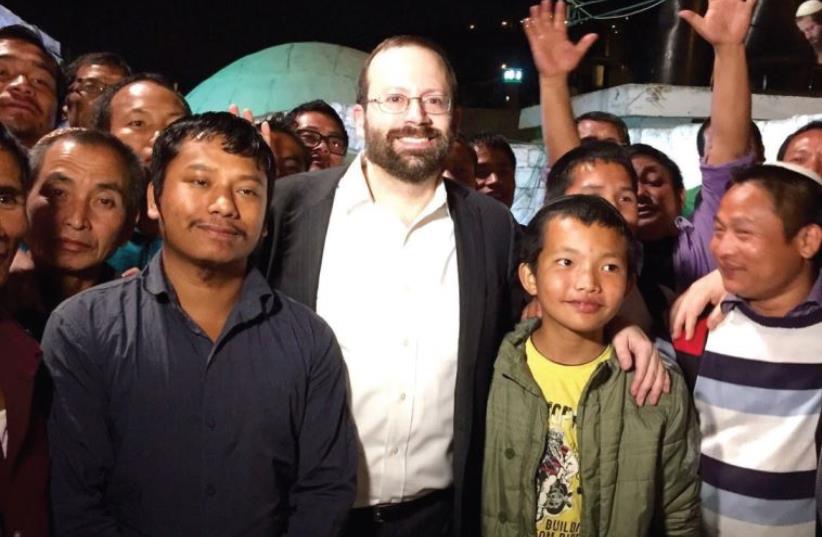 THE AUTHOR visits Joseph’s tomb with Bnei Menashe who have come on aliya
(photo credit: Courtesy)
Advertisement
It was after midnight one night earlier this month that I found myself in an armored convoy on the streets of Palestinian-occupied Shechem (Nablus) on the way to a remarkable family reunion of historic proportions. More than 2,700 years after their ancestors had been exiled from the Land of Israel, a group of recent immigrants from the Bnei Menashe, or Sons of Manasseh, were set to visit their forefather Joseph’s tomb, the first rendezvous of its kind.For these 100 descendants of a lost tribe of Israel, who came on aliya from India last November through Shavei Israel, the organization I chair, it was an emotional outing, one that would provide them with a unique opportunity to reconnect with their roots in a very tangible way.Escorted by the military, our armored convoy wound its way slowly through the dark and rock-strewn streets of the largely hostile city. The IDF jeep in front of us suddenly slammed to a halt. To our left, a shadowy figure hurled something toward the lead vehicle, prompting a number of soldiers to take off in pursuit before returning empty-handed. Undeterred by the attempt at intimidation, a few short minutes later we found ourselves at the small compound housing the burial site of the revered biblical figure.It was nearly 15 years ago, in October 2000, that Joseph’s Tomb captured headlines around the world.
See the latest opinion pieces on our page
Armed Palestinian policemen and Fatah terrorists had launched a coordinated assault on the Israeli soldiers guarding the site. After then-prime minister Ehud Barak ordered the IDF to withdraw, the Palestinians went on a rampage and demolished the tomb with sledgehammers and iron bars. In subsequent years, after the structure was repaired, the IDF began permitting Jewish worshipers to visit the site once a month for just a few hours, and only under cover of darkness.But all the difficulties involved in organizing the visit earlier this month only served to add to the special atmosphere that prevailed when it finally took place.Along with thousands of other Israelis who had come to pray, the 100-strong Bnei Menashe crowded into the small outdoor courtyard outside the room housing the tomb. But then, in a remarkable turn of events, the Bnei Menashe burst into song and began chanting a timeless prayer known as “Katange, Katange” in one of their native languages of Thadou-Kuki. The community’s elders started to dance, extending their arms to the side and gesturing like birds aloft in flight, symbolizing the biblical promise that the people of Israel would be returned to their land on the “wings of eagles.”“Despite wandering for many thousands of years,” the lyrics declare, “I will be brought back at last through my brother Judah. And I will proclaim my joy and contentment through song,” it says, praising God that one day Manasseh’s children would return to “a pleasant land flowing with milk and honey.”Locking arms, the Bnei Menashe formed a circle, their voices rising ever louder into the night.In a moving display of Jewish unity, dozens of onlookers, ranging from black-clad haredi (ultra-Orthodox) rabbis from Bnei Brak to young men sporting knitted kippot and sandals, joined the circle.Though they did not know the words, the veteran Israelis also belted out the refrain: “Katange, Katange Aba aw! Katange Bnei Menashe!” (we give praise O Father; we give praise Bnei Menashe!). The message being sent to the Bnei Menashe was clear: your celebration is ours too.As the immigrants proceeded into the chamber housing the tomb, they fell onto the large stone which sits over Joseph’s burial site. Many began to weep, cognizant of the fact that their own ancestor, Menashe, was Joseph’s elder son. On each side of Joseph’s grave are two smaller stones signifying the burial places of his sons Menashe and Ephraim.This too proved highly emotive for many of the worshipers present, who made way for the Bnei Menashe to place their hand on Menashe’s grave and whisper a prayer that in their ancestor’s merit, all of his descendants should swiftly come home again to Zion.This very special family reunion, which brought the Bnei Menashe together with their forefathers, served also as a tangible sign that the return of the Jewish people to our Land has the ability to unite even the most disparate segments of our nation.Whatever the distinctions in dress, the differences in custom, and the dissimilarities in accent, there is something far greater that unites us all: the bond forged by Jewish history and the collective belief in Jewish destiny.Some had parents or grandparents who had survived German death camps. Others had escaped from Stalin.There were those who had left behind the comfort of the West, and those who traced their ancestry back to a lost tribe of Israel.But that night, in the heart of hostile Nablus, at the tomb of Joseph our shared forefather, they had come together in song, dance and prayer, as though all the variation among them was little more than a superficial and insignificant detail.If that’s not a miracle, what is? The writer is chairman of Shavei Israel (www.shavei.org), which assists lost tribes and hidden Jewish communities seeking to return to the Jewish people.