Get your flu shot!

Getting a flu shot might mean the difference between life and death. 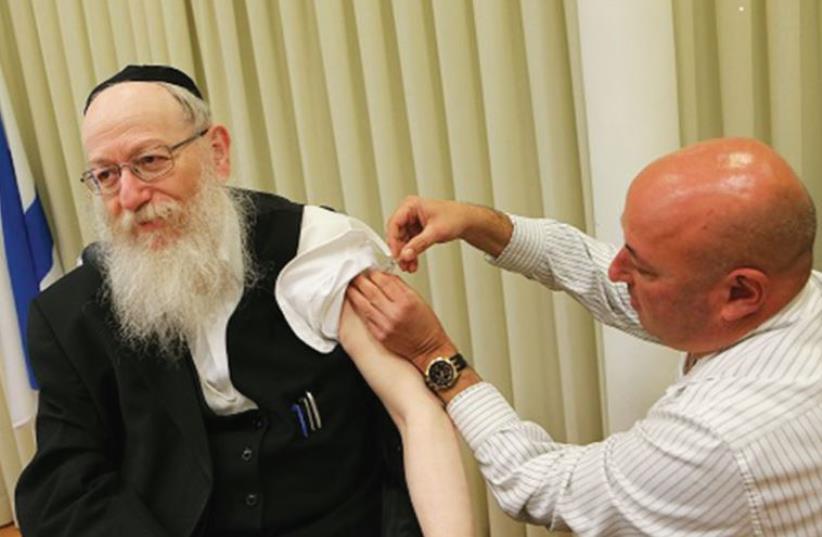 HEALTH MINISTER Yaacov Litzman receives his flu shot from Prof. Itamar Grotto
(photo credit: HEALTH MINISTRY)
Advertisement
We are facing an outbreak of swine flu – the first serious one since 2009. Last week Esther Aryeh, a 52-year-old mother of six from Netivot, died of the H1N1 (swine) virus. A dozen others are hospitalized, over half in serious condition.What makes Aryeh’s death all the more tragic is that it did not have to be.“Had Esther gotten vaccinated, this might not have happened,” Esther’s husband, Yehuda, told Ynet. “I call on everyone to get vaccinated. If the doctors say we should – then we must.”In the wake of the outbreak, the Health Ministry is urging Israelis over six months old to get a flu shot, particularly pregnant women and people with chronic diseases such as heart problems, obesity, diabetes or Down syndrome.But it’s important for all to get vaccinated, because this reduces the chance of the virus getting into the community and helps protect those with weak immune systems.Aryeh had a chronic illness. She was first hospitalized a month ago at Soroka-University Medical Center in Beersheba.She was transferred to Rabin Medical Center-Beilinson Campus in Petah Tikva on Thursday.“It’s not too late to be vaccinated,” a representative of the Health Ministry told The Jerusalem Post’s health and science editor Judy Siegel-Itzkovich. “Go now!” Prof. Nati Keller, head of the Clinical microbiology and immunology department at the Sheba Medical Center and chairman of the Israeli Infectious Diseases Society, explained that swine flu was created by a genetic mutation of the flu virus.He assured the public that those who received flu shots are safe from swine flu. “The flu began rearing its head about a week ago and the strains found are covered by the vaccine. Those who received the vaccine recommended by the Health Ministry are most likely protected,” he said.The percentage of people who have been vaccinated is lower than at this time last year. A number of factors might be contributing to the lower than usual turnout: the relatively dry and pleasant weather; the wave of terrorism; an increasing number of Israelis opposed to vaccinations of all kinds.A small, cross-sectional study conducted last year by Anat Gesser-Edelsburg, a public health researcher at the University of Haifa, found that even doctors and nurses sometimes allow irrational factors to persuade them to be less supportive of vaccinations.Only 65 percent of them take the flu shot voluntarily.To investigate how health workers perceive the risk of such potential pandemics, 109 Israeli doctors and nurses and 131 Israelis who were not health workers were asked to rate their support for countrywide vaccinations in two scenarios: the real outbreak of bird flu in China in 2013 and a theoretical outbreak in Israel.In the China case, data analysis shows the health workers were significantly more supportive of vaccination than the other Israelis were.Compared to the other Israelis, the health workers tended to explain their positions more analytically. Forty- three percent said things like, “In the last avian flu, the vaccine proved to be extremely effective and safe, so why not vaccinate?” compared to 11% of the laypeople.In the case of the imagined bird flu outbreak in Israel, the health workers lost their professionalism. Like the layman Israeli, the health professionals explained their positions on vaccination in Israel mostly in terms of their emotions and experiences, saying things like, “I don’t know why, it just sounds unsafe.”Health workers may be guided by their medical training when thinking about China, which is geographically and culturally far away. But when they consider their own lives in Israel, they may be swayed by intuition and emotion – causing them to downplay the risk posed by an outbreak.Mistrust of the authorities, fears about vaccine safety and side effects, and the perceptions that vaccines are only partially effective and not necessary for healthy people all contribute to keep people away from vaccination.Another factor may be “optimism bias,” the tendency of people to believe that they are at less risk of experiencing a negative event than others.All of us, however, should overcome irrational fears or optimism and go out and get vaccinated. As Esther Aryeh’s tragic story illustrates, getting a flu shot might mean the difference between life and death.