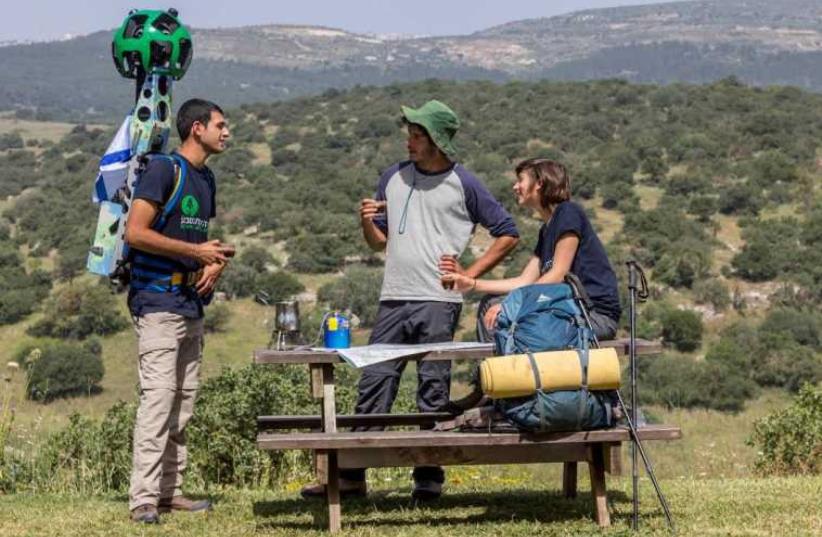 SPNI youth members on Israel's National Trail with Google Street View cameras
(photo credit: SPNI)
Advertisement
Earlier this month Google and the Society for the Protection of Nature in Israel (SPNI) announced that a high-tech camera pod called the Street View Trekker would begin recording the route of Shvil Israel, or the Israel Trail, the country’s longest and best-known hiking route. For many Israeli hikers, including leaders of the SPNI, the arrival of the Trekker placed Israel’s border-to-border “national trail” in the ranks with the Grand Canyon and other Google-mapped treks.But the Google Trekker project also calls attention to the fact that little has been done to help the Israel Trail reach its potential as a world-class hiking route. When the trail was planned during the late 1980s and early 1990s by SPNI personnel, it was done on a shoestring budget, and marked mostly atop Israel’s existing trail system. When it was officially inaugurated in 1995, Shvil Israel had no special infrastructure other than its distinctive orange-blue-white blazing system. The trail existed, but hikers had to figure out how to try to walk it.The fact that Shvil Israel succeeded testifies not to skillful planning or thoughtful investment by the SPNI, but rather to the power of the idea of a border-to-border trail, and to the vibrancy of Israel’s hiking culture.Huge sections of the trail, including most of the Negev, offered few places to stay and fewer resupply points for water. Logistically, the trail was almost unsuitable for long-distance hiking. But hikers, along with the residents of communities along the trail, figured out how to fill the gaps. Shvil Israel survived, and eventually took on a life of its own.Today, the 1,100 km. Israel Trail is a cultural touchstone, and a rite of passage for young men and women completing their military service. It has gained recognition not only from Google, but also from organizations like National Geographic, which in 2012 declared Shvil Israel one of the world’s 10 most epic long-distance treks. But even though the trail is beloved by Israelis, and is becoming well-known even outside Israel, the reality is that few people hike the trail from end to end, because the practical challenges of hiking Shvil Israel remain unaddressed.The longest single waterless section in the Negev takes about three days for most hikers to cross. Hikers are forced to either carry huge amounts of water, or pay someone to drop water off for them. And this is only one section of the trail. Unless hikers plan frequent departures from the main route, they have to plan for 10 to 12 waterless days on the southern section of the trail. This makes crossing the Negev on Shvil Israel not only difficult, but potentially dangerous. In fact, as the Google Trekker team makes its way north along the trail, it will have to address these challenges.For foreign hikers, these problems are magnified.Shvil Israel could be one of the crown jewels of Israel’s tourism industry, attracting international hikers just as trails do in Europe and the United States. However, almost no information exists for foreign hikers interested in visiting the Israel Trail. Most of the guidebooks for the trail, and all of the topographical maps produced by the SPNI, are available only in Hebrew. This problem extends to all of Israel’s trails – Israel has one of the most extensive trail systems of any country in the world, but most visitors have no idea it exists.In certain areas, the quality of the actual trail is problematic as well. For the most part, Israeli trails are not built or developed, but only marked, with little attention to the steepness of the grade or the quality of the walking surface. And while hiking purists (myself among them) may prefer the wildness of Israeli trails to the tame smoothness of American and European trails, there are some places where safety is a real concern, and could be improved with some planning and effort.How can these concerns be addressed? Some answers might be found on the trail that inspired Shvil Israel in the first place: the Appalachian Trail in the United States. That trail is managed by the Appalachian Trail Conservancy, a non-profit organization that raises funds and recruits volunteers for trail development and advocacy. Because of its efforts, the Appalachian Trail boasts well-built walking surfaces, free overnight shelters for hikers, and – perhaps most importantly – thousands of annual end-to-end hikers and millions of annual day hikers, from all over the globe.So far, no organized effort like this has been created for the Israel Trail. The non-profit SPNI is technically the custodian of the trail, but has never devoted serious effort to improving it or promoting it to outsiders.The Israeli government, for its part, has always been happy to celebrate Shvil Israel’s successes, but has never done much to address its deficiencies. The trail exists today thanks to the skeleton crew of SPNI trailblazers who renew the markings every year, the good people who live along the trail and offer help to hikers, and of course, the hikers themselves, who love Shvil Israel enough to brave its challenges and imperfections.But the hikers deserve better. Shvil Israel is indeed one of the world’s greatest long-distance treks, and it deserves to be treated as such. If an Israel Trail Conservancy existed, it could gather the energy of Israel’s culture of hiking, and direct it toward making Shvil Israel everything it could be. Water resupply points, English-language maps and guidebooks, and improved night camps in certain locations – all of these could be easily created, and at relatively little cost.When SPNI CEO Moshe Pacman announced the beginning of the Google Trekker effort, he said, “This exposure will encourage tourists and citizens to experience by foot the varied natural and cultural landscapes of Israel, to fall in love with them and to work to preserve them.” If the people who love Shvil Israel make an organized effort to improve the trail, and are supported by Israeli NGOs and civil institutions, his words could actually come true.

The author is a post-doctoral researcher in the Department of Geography at the Hebrew University of Jerusalem, and the incoming Assistant Professor of Israel Studies at Binghamton University.