A severe case of ‘truthiness’ has – I hope – led a cereal maker to learn a lesson about candor. But where does it leave a certain famous face? 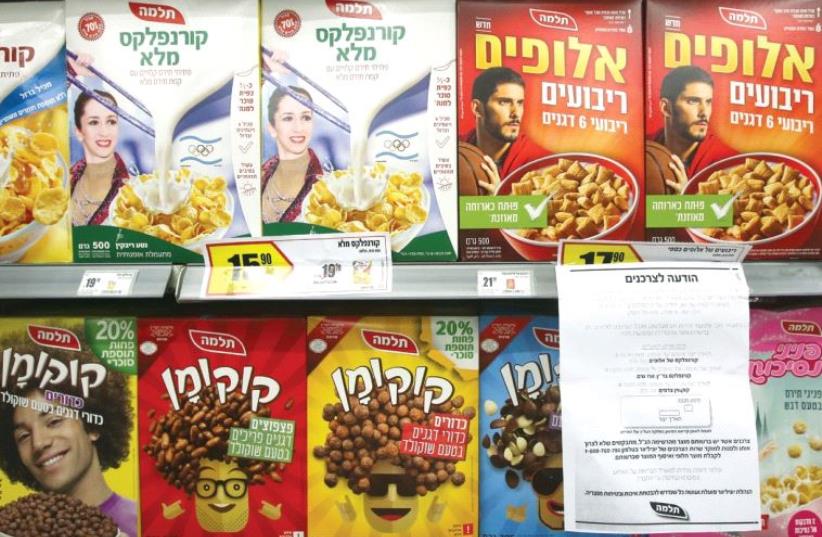 A notice is seen next to packages of Telma cereals warning shoppers of some of the company’s hazardous products
(photo credit: MARC ISRAEL SELLEM)
Advertisement
Years ago, Hertz, the auto rental company, hired O.J.Simpson to push its brand.At the time, Simpson was a star NFL running back known for his speed and agility. He was handsome and wholesome, perfect for the message the firm wanted to get across: When you rent from us, we’ll get you behind the wheel of a clean, quality vehicle in no time.The company dropped Simpson in the early 1990s, though, when reports surfaced that he beat his wife. Smart move: Two years later, his now ex-wife was brutally stabbed to death along with a friend, and... well, you know the rest.Both Coca-Cola and Pepsi use pop stars in their ads. Young people drink lots of cola. They also listen to a lot of pop music. Smart match.In 1989, Pepsi hired Madonna. Her first commercial was built around her latest song, “Like a Prayer.” It ran exactly once, because the very next day, the music video for “Like a Prayer” was released. It featured interracial sex in a church. Not only that, there was provocative dancing in front of a burning crucifix and Madonna with what clearly looked like stigmata.Following loud complaints from church groups and even the Vatican, Pepsi withdrew the ad, dropped its sponsorship of the pop diva’s concert tour and excommunicated her altogether (allowing her to keep her $5 million advance, though).But what happens when it’s the company that misbehaves? BACK IN 2011, Omri Casspi, Israel’s man in the NBA, signed on to endorse cornflakes made by Telma, an Israeli food manufacturer owned by Unilever, the global food and personal hygiene giant.Casspi is a hero to a lot of Israeli youngsters. He is good looking, pleasant and, perhaps most important, clean-living, something of an anomaly in a sport whose stars are just as well known for their tattoos, flashy wheels and hot chicks. So cornflakes and Casspi? What could go wrong? Well, nothing on his part. What went wrong is that Telma/Unilever was caught being less than candid about salmonella in its cornflakes – which is to say Casspi’s cornflakes – and apparently in other Telma products, too.The saga began when customers started noticing shortages on the shelves.Telma stonewalled. But when the queries persisted, it grudgingly came around and admitted it had found salmonella.The real problem, though, is it insisted that none of the tainted cereal had been shipped. It even took out large ads saying so, adding that Telma cereals on grocery shelves were just fine to eat.Soon enough, this was disproved, and in a second series of large ads (one of which ran in The Jerusalem Post earlier this week), Unilever Israel CEO Anat Gabriel personally came clean and told consumers: “I truly and sincerely apologize for the recent events.... I can assure you that we will... tighten our procedures to ensure that this does not reoccur.”Yeah, right.Oh, I don’t doubt that Telma/Unilever will do everything it can to ensure that salmonella-laced cornflakes never again reach supermarket shelves. Reputation is everything in a free market.My doubts concern its general transparency.And why not when Transparency International, an NGO fighting global corruption, rates Israel 32 out of the 168 countries and territories it monitors.Thirty-two out of 168? Not bad, it would seem. In fact, several fellow members of the Organization for Economic Cooperation and Development (OECD), considered a global benchmark for development and good governance, ranked behind us.But consider this: Uruguay, Qatar, the United Arab Emirates, Botswana and even Bhutan ranked ahead of us.And consider this, as well: The two most transparent countries, Denmark and Finland (you expected somewhere else?), were given grades of 90 or more out of 100, with 100 being “very clean” and 0 “highly corrupt.” Israel got 61.The makers of Omri Casspi’s cornflakes might not be corrupt according to the widest understanding of the word. But “truthiness,” which is when you rely solely on what you perceive to be the truth, can be called corrupt behavior – and it’s common in the public sphere here.SO MUCH for our trust in Telma/Unilever and its candor. But what about Casspi? That’s his face on the box, and while this might not hurt his stats on the parquet or his image in faraway America, his standing here as a homegrown hero could be affected.He told Channel 2 he believed Telma/ Unilever did not lie. (It’s well-known in the business world that when someone endorses a product, this person is contractually enjoined from saying anything negative about it or the manufacturer.) But to judge from similar products that go south, celebrity endorsers tend to run the other way.Look at cigarettes. Once the US surgeon general made it clear that you had a far better chance of dying of cancer than making it to the silver screen if you smoked the cigarettes you saw between the fingers of Humphrey Bogart or Lana Turner (who both were heavy smokers and themselves died of cancer), stars went somewhere safer to sell their faces.And what about you, Omri? Anat has apologized to us (whatever that’s worth); has she apologized to you? Maybe you’d like to be the face of The Jerusalem Post. On second thought, probably not. Terrorist attacks, political corruption, “truthy” CEOs – all we print is bad news. Who’d want to endorse that?