Hard as it might be to believe, some people on both sides of a divide can just move on. 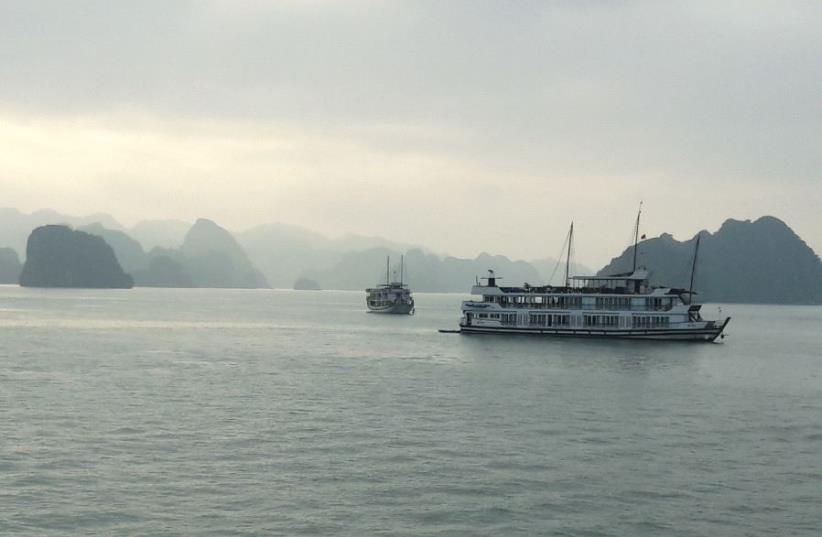 Ha Long Bay and some of its ‘dragons.’
(photo credit: LAWRENCE RIFKIN)
Advertisement
Funny what half a century can do.In 1969, Country Joe Mc- Donald got up on stage at Woodstock and roused hundreds of thousands of longhairs and flower children with his “I Feel Like I’m Fixin’ to Die Rag.” It was a deeply cynical look at a war the US was waging in some God-forsaken rice paddy halfway around the world – a war that was widening and, in turn, cleaving a jagged rift in American society.It was not a terrific time. When I hear “Vietnam,” I still see flag-draped boxes heading home (three to my small town alone). I see the evening news with Buddhist monks setting themselves ablaze, fleets of drab-green helicopters touching down adjacent to tree lines to land fresh troops and take out the casualties, and noisy protests spreading throughout the United States.One memory is especially potent: the June 27, 1969, issue of Life magazine. It dedicated 10 whole pages to the names – and faces – of each of the 242 young men whose deaths “in connection with the conflict in Vietnam” had been announced by the US military between May 23 and June 3 of that year. Most seemed barely older than I was, and I stared at those faces again and again, contemplating the very real possibility that someday soon, mine would be there, too.It was, in fact, a terrible time.Fast-forward to December 2016. My wife and I deplane at Noi Bai International Airport. That’s in Hanoi. Figuratively, it’s the far end of the Ho Chi Minh Trail. It’s the place blasted by B-52s during Operation Linebacker; home to Hoa Lo, dubbed the Hanoi Hilton by downed US airmen imprisoned and tortured there; the city where actor and anti-war activist Jane Fonda posed next to an anti-aircraft gun, enraging many Americans and earning her the sobriquet Hanoi Jane.MUCH OF Vietnam is simply magnificent. Many locales are not only visually stunning, they are brimming with history and culture. And don’t get me started on the food. To me, the north was the most beautiful part.Ha Long Bay’s many tall islands were like the fins on the back of a semi-submerged dragon. In fact, the name Ha Long is a Vietnamese-Chinese concoction meaning “descending dragon,” a reference to an age-old tale about dragons protecting the area from invaders.The Sapa-Cao Lai area in the northwestern mountains gave us a glimpse into the homes and lives of the Hmong and other tribal people. Many still live in simple huts in the villages dotting the terraced mountainsides and valley floors, and their cloth goods, dyed with locally grown indigo plants, are known far and wide (as are the permanently purple-blue hands of the women who process the dyes).Hanoi itself was a cultural treat, from the cozy noodle joints to the many ornate, incense-rich Buddhist temples and the water puppets at the city’s famed Thang Long Theater. The pedal-rickshaw drivers gave us a pavement- level tour of the Old City, where the late-afternoon traffic, especially at the intersections, made Israeli drivers look positively meek and law-abiding by comparison.It was at the granite-slabbed and -columned mausoleum of Ho Chi Minh that I finally confronted the odd sensation that had been with me since long before our trip. It wasn’t Ho’s well-embalmed body under glass; rather, it was the elderly men and women in ill-fitting, frayed uniforms, their chests adorned with tarnished medals, who came to pay their respects in small organized groups.These, we were told, were some of the soldiers who had fought the Americans and, before them, the French.But it wasn’t until the War Remnants Museum in Ho Chi Minh City, yesteryear’s Saigon, that I faced the legacy of the conflict head-on.Situated in the former United States Information Agency building, it had been called the Exhibition House for Crimes of War and Aggression (and prior to that, the Exhibition House for US and Puppet Crimes) before relations were reestablished with Washington in 1995. Despite the diplomatically watered- down name, though, it reeked of contempt and condescension.Outside was an array of US war booty ranging from machine guns to tanks, helicopters and even fighter planes.There were also reconstructions of the so-called tiger cages in which the South Vietnamese regime held its many political prisoners. Inside, the displays referred to the “American gangsters” and “GI baby-killers,” and highlighted the My Lai massacre, napalm and phosphorous bombs, and, of course, Agent Orange.It was the terrible ’60s all over again, and definitely in your face. But the minute we left the museum grounds, the gloating was gone. It was just another noisy city in a far-off land where the people were exotic and friendly. As our outstanding guide Ranen Horkany told us, the Vietnamese just wanted to get on with their lives.THIS WAS exemplified by a pleasant, seventy-ish woman who owned a simple restaurant in a hamlet in Tay Ninh province, between Chu Chi, with its kilometers of preserved Vietcong tunnels, and the Cambodian border.As the woman hovered over us like a Jewish grandmother, busily directing her wait staff and plying us with local delicacies, Horkany told us she had been a Vietcong battalion commander and led a postwar brigade in the People’s Army. If we didn’t believe it, all we had to do was swivel our heads to view a photograph on the otherwise unadorned wall showing her in a bemedaled uniform, beaming and shaking hands with Vietnam’s president.Forty-plus years ago, had my draft lottery number come up, I might have been fighting her guerrillas – perhaps fighting even her. Now here I was, not far from where she had once directed battles against people I might have known, and I was happily chowing down in her restaurant.Coming from where I live, a place where two sides have been locked in war for over a century and where only the most diehard optimists believe peace and normalcy can be achieved, it was an eye opener if there ever was one. And the food… well, don’t get me started.