When will honest Israelis who believe in justice speak out against this crooked system?

When Mohammad El Halabi was returning from a regular work meeting in Jerusalem on June 15, 2016, he had no idea his life would be completely changed. He had no idea that he would be sitting in an Israeli prison for over five years for a completely bogus charge that was created to stop humanitarian work in Gaza.

At the Erez checkpoint, he was whisked away and imprisoned without knowing why. For 50 days he was interrogated, tortured and asked to confess to things he has never done. He refused. He was repeatedly told that he had passed money and goods to Palestinian military organizations. He had not. The Israeli media was full of stories about the arrest and that Mohammad El Halabi was the key person in passing $50 million of humanitarian aid to what the Israeli media called Palestinian terrorist organizations.

As director of the Gaza office of World Vision, Halabi was providing important humanitarian support to needy Palestinians. His personal spending limit was a mere $300 and the entire Gaza office’s maximum spending was $15,000, and that had to be approved by the head office in Jerusalem. We tried our best to use as many of these resources as possible to help the needy. Mohammad El Halabi went out of his way to avoid any dealings with political or militant organizations knowing well that any relationship with Hamas or other organizations would bring an end to the needed humanitarian effort he was working on.

Two months after his arrest, an Israeli military prosecutor approached him and suggested that he should accept a deal in which he admits to a much smaller amount of money. He refused without even blinking an eye. They asked to implicate the head of the Jerusalem office of World Vision, Alex Snary, in return for freedom, which was also refused. 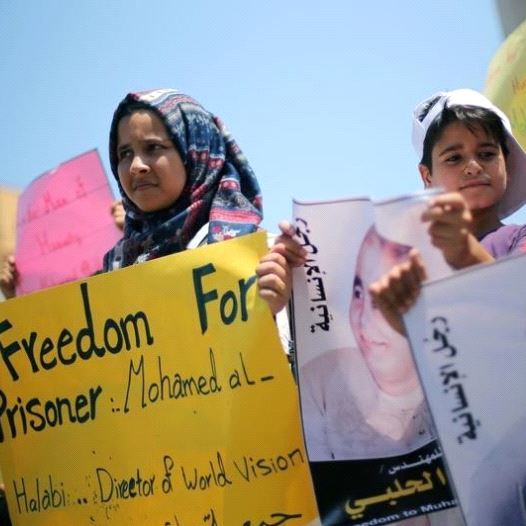 Palestinian demonstrators take part in a protest in solidarity with Mohammad El Halabi, World Vision's manager of operations in Gaza who was accused by Israel of funnelling millions of dollars in aid money to Hamas, organised by foundations and societies benefiting from World Vision in Gaza City Aug (credit: REUTERS)

They purposely extended his detention to force him to admit to something he didn’t do. His lawyers’ repeated requests for bail were rejected even by the High Court because his charge was akin to treason, they said.

The Israeli plea-bargaining charade apparently has become a well-oiled machine. Israel targets a person for whatever reason, arrests him or her, and pins any charge on them knowing that they can keep that person in jail for as long as they want.

In most cases, Palestinians accept a plea just to get out. Israeli human rights organizations have documented a staggering percentage of over 98% of cases in which charges end up with a Palestinian accepting a plea bargain, admitting to a lesser charge in return for a lower sentence, which sometimes means freedom. El Halabi could not do that and, as a result, he and his family have paid a high price for a principled position.

He couldn’t admit to having done something he didn’t do for ethical personal reasons. But he also knows that such admission would taint the good work that his organization, World Vision, and other genuinely honest and committed humanitarian organizations do, helping needy Palestinians.

No one complains about this charade because they all think that those who admit to charges are indeed guilty. Some might be, but he clearly is not and has vowed that he will not admit to a crime that he didn’t carry out.

Israeli and international experts who know him testified to that in court without such testimony having any effect. The court hearing in Beersheba was repeatedly postponed in the hopes that he would give up; he hasn’t and will not.

No serious evidence was ever presented because there was no crime committed. A bogus photocopy of an alleged confession that was produced was debunked by an Israeli forensic expert as having been doctored. The Israeli prosecutor says the original was lost.

Mohammad El Halabi and others have since discovered that the entire case was fabricated to stop humanitarian aid to Gaza to pressure Hamas. It had nothing to do with him or World Vision, yet both were victims. Humanitarian aid at least from World Vision was stopped as the global organization had to protect its reputation due to the serious Israeli charges, even though they knew they were untrue.

Even after a concerted effort by independent investigators and world-class auditors found no wrongdoing, World Vision has not yet returned to help the needy, and so politically, former prime minister Benjamin Netanyahu and his people who were behind this sinister plot and those who have not stopped it, have indeed succeeded.

After 166 court sessions and a biased court that has barred his lawyer, Maher Hanna, from conducting his defense properly and fairly under false secrecy charges and without his agreement to a plea bargain, the court has now adjourned.

We await its results but one thing is sure regardless of what the court will decide: What is called Israeli justice when it comes to Palestinians is nothing more than a charade. Mohammad El Halabi’s family and he are paying a very high price for refusing to play by the rules of this unjust and unfair system.

When will honest Israelis who believe in justice speak out against this crooked system?

The writer, an award-winning Palestinian journalist, has been following the Mohammad El Halabi case for years.