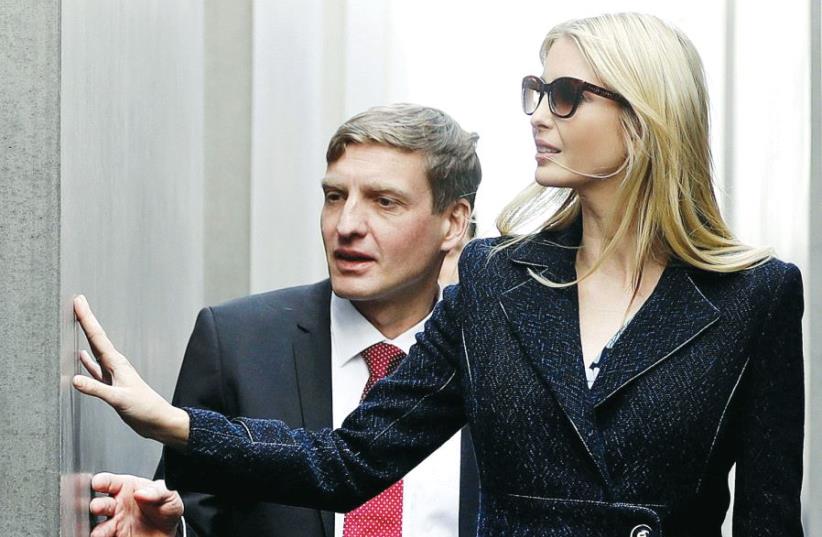 Ivanka Trump, daughter and adviser of US President Donald Trump, visits the Holocaust Memorial in Berlin last month
(photo credit: REUTERS)
Advertisement
The recent controversy over the current American administration’s knowledge of the Holocaust – or lack thereof – reveals that there is a dramatic need to educate the public about the basic facts of the Shoah.In particular, we need to make certain that our own people – especially our children – are familiar with this seminal event in Jewish and world history.This primer should be an impetus to seek and share a deeper understanding of the Holocaust, thus perpetuating the memory of those who were its victims.1. When did the Holocaust begin?Adolf Hitler and his National Socialist (Nazi) Party took power in 1933, and began to institute a wide range of anti- Jewish actions. The most infamous of these were the Nuremberg Laws of 1935, which discriminated against Jews in many areas and severed them from the general German population.The Shoah, however, is generally dated from November 9, 1938, when widespread violence against the Jews – including the burning of hundreds of synagogues, the deportation of Jews to concentration camps and the destruction of Jewish businesses – resulted in what came to be known as Kristallnacht, the Night of Broken Glass.2. What was Hitler’s plan for the Jews? As early as 1925, in his book Mein Kampf (My Struggle), Hitler expressed his hatred for Jews, whom he blamed for Germany’s – and the world’s – problems.While scholars debate at what point the Nazis decided on a plan of mass extermination, certainly by the time of the Wannsee Conference (January 1942) the concept of the Final Solution was concretized, whereby 11 million Jews of Europe would be murdered.3. In what way were Jews killed?There were three primary means of killing Jews: One was placing them into overcrowded ghettos, where they would die of starvation and disease. The second was via specially trained mobile killing squads – Einsatzgruppen – which shot to death close to a million-and-ahalf Jews in countries occupied by the Nazis. Finally, of course, were the death camps, where more than three million people in total were killed, 90% of them Jews.4. What were the main death camps?The largest was Auschwitz-Birkenau, where more than a million Jews were killed. Other death camps/killing centers included Treblinka, Belzec, Chelmno, Sobibor and Majdanek, all of which were in Nazi-occupied Poland. The primary form of murder was gassing, using either Zyklon-B poison gas or carbon monoxide. The bodies were then burned in massive crematoria.

5. How many Jews were killed?Most authorities put the number at approximately six million, based on prewar and postwar figures. However, some estimates are higher, due to the fact that whole towns and shtetls were wiped out, with no survivors or records to provide a completely accurate accounting. The highest death figures were in Poland and the USSR. The highest number of Jews killed in Western Europe was in Holland.6. Was there any Jewish resistance? Resistance against the Nazi war machine was extremely difficult. Despite the much greater number of victims than perpetrators, the Nazis were well equipped with modern weaponry, and brutally suppressed all forms of resistance.Great effort was made by the Nazis to hide their designs, and the victims were generally too weak from hunger and disease to launch group action.Nevertheless, Jews did bravely resist in numerous places, including Krakow, Lvov, Minsk and Bialystok. There were also revolts by death-camp inmates in Auschwitz, Sobibor and Treblinka, which forced their closure. In addition, spiritual resistance – the refusal to abandon faith in Judaism – was well documented in thousands of instances.7. What was the Warsaw Ghetto Uprising?The largest ghetto was in Warsaw, where 350,000 Jews were crowded into an extremely dense area. Deportations to the death camps, primarily Treblinka, began in July 1942, resulting in the murder of most Warsaw Jews. But on April 19, 1943 – Passover night – the remaining 50,000-70,000 Jews, led by Mordechai Anielewicz, took up arms against a large German force. They fought fiercely for 42 days, until finally being overcome. Thirteen thousand died in the revolt; the rest were deported, the ghetto was razed and the magnificent Great Synagogue of Warsaw was burned to the ground.8. Who helped the Jews?Tragically, few countries were able or willing to help their Jewish citizens. In fact, pro-Nazi collaborators assisted the Germans in many countries, including France, Hungary, Lithuania, Holland, Croatia and Ukraine. An exception was in Denmark, where the resistance (not the government, which had capitulated to Nazi demands) organized a boat-lift to neutral Sweden in 1943.Courageous individuals – such as Raoul Wallenberg, Chiune Sugihara, Dr. Feng-Shan Ho and Aristides de Sousa Mendes – issued visas to Jews, often in defiance of their governments.Even the Allied forces – who knew of the mass extermination taking place as early as 1942 – took little action to specifically save Jews. Nor did the British allow Jews fleeing Europe to enter Palestine.9. What happened to the Nazis after the war? While some of the more prominent Nazi officials were punished after the war – including the 10 hanged at Nuremberg in 1946 – most Nazi officers and SS members were never held accountable.Some governments, particularly Germany, paid reparations to Israel and to individual Jews who suffered.Other countries, in particular Poland, refused to do so.10. What happened to Jews after the war?At first they were placed in displaced persons (DP) camps and nursed back to health. A small minority then returned to their former homes, but the majority went either to Israel or to Western countries.It is estimated that 200,000 survivors of the Shoah live in Israel today; 100,000 in the United States.

■ The writer is director of the Jewish Outreach Center of Ra’anana. jocmtv@netvision.net.il
Advertisement
Subscribe for our daily newsletter