In Plain Language: Pain and perseverance 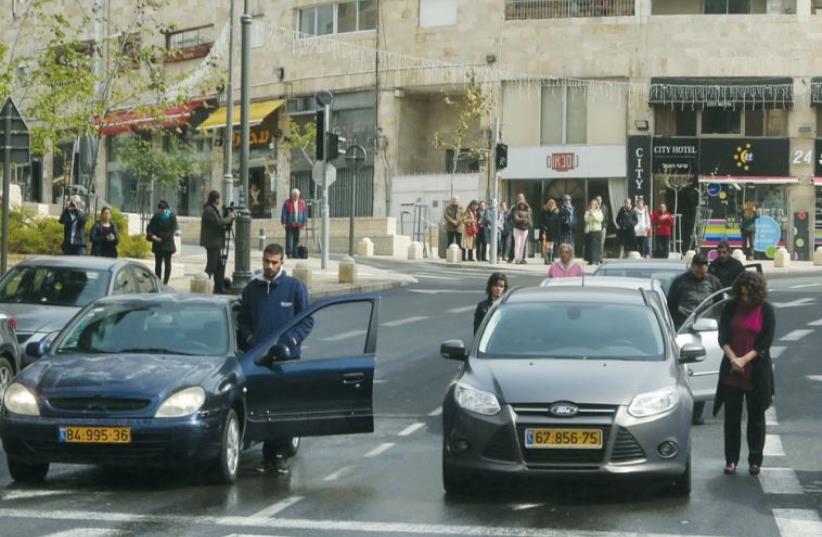 People stand outside their cars to observe a moment of silence on Holocaust Remembrance Day in Jerusalem
(photo credit: MARC ISRAEL SELLEM)
Advertisement
Holocaust Remembrance Day is the most emotional day in the Hebrew calendar.Yes, we Jews may be divided along dozens of lines: we are Reform, Conservative, liberal, humanist, traditional, Orthodox, Conservadox, hassidic, haredi or secular.And we may differ – sometimes violently – over practically every issue under the sun, from religion to politics to Zionism to Torah. But when it comes to the Holocaust, we are one – united in our loss, bonded by our communal pain.The overwhelming tragedy of this seminal event in human history transcends all the manifold issues that conspire to tear us apart. It is as if each year, we are transported back to the death camps, where labels and loyalties meant nothing to the German executioners, where Jews were simply Jews, with no distinctions between us as we walked that final mile.As I stand silent at the annual Remembrance Day siren, an array of emotions flash through my mind, bombarding my heart and mind with 100 conflicting thoughts. Usually, they are too diverse to sort out and scrutinize, to examine and elaborate upon. But that is finally what I decided to do this year, to reflect upon these emotions and put them to pen (or computer).

GRIEF:Certainly the strongest emotion is grief.If the loss of a single loved one is devastating, what can we say about entire Jewish families, communities, shtetlach, cities that were cruelly and completely obliterated? Who can adequately describe a mother’s pain at seeing her baby ripped from her arms, his tiny head dashed against a wall? How can we grasp the enormity of an entire continent of good people, holy people, synagogues and schools brought down in flames, as our loved ones were reduced to ashes by a barbaric monster? What kaddish is long enough and loud enough to encompass six million victims? Words are so small that they end up mocking the harsh reality, and so we are reduced to mourning in silence, bearing our grief in a paralyzing state of shock.

ANGER:How could such a thing have happened? How could evil people such as the Nazis have come into being; how could they have had the capacity for such brutality, such systematic sadism and merciless hatred? How did the world allow them to do so much harm for so long? And what of all the many war criminals never brought to justice, who were welcomed back into their host communities or escaped to a sunny exile in South America or the Arab world? Why did so many countries – Lithuania, Holland, Ukraine, Slovakia, to name a few – so eagerly collaborate with the Germans? My blood boils from fury at how the world was unified against us, how the West failed to come to our defense, and denied us refuge. In the name of the martyred millions, I can neither forget nor forgive the murderers or their accomplices.

FEAR:I imagine myself hiding in a dark corner during a Nazi Aktion, hoping, praying that I would not be discovered.I wonder what I would have felt on the way to the gas chambers, or watching my fellow townspeople being shot, and falling into a mass grave. And I am scared beyond belief at the trauma my fellow Jews underwent.But not only am I terrified about the past, I am also downright scared about the future. Can such an atrocity happen again? If the mass-murderer Marwan Barghouti – thankfully sitting in an Israeli prison, may he rot there for 100 years – can be nominated for a Nobel Prize; if Barghouti’s fellow Palestinians can tout him as their next leader – primarily because he so excels in murdering Jews – I wonder what we have learned, how far we have progressed since the dark days of Auschwitz. Anti-Semitism is in vogue again and Jews are targets across the globe, singled out for selective demonization. Where will it lead? PRIDE: Along with the deep sadness that permeates this day, there is also a strong emotion of pride that runs through our people. Pride in the knowledge that we never succumbed to the Nazis’ attempts to degrade us, to strip us of our humanity. Yes, they took away our names, they shaved our heads, they stole our property. But they never destroyed our will to live. Amazingly, we remained decent, moral people throughout all the horror we endured.We looked out for one another; we built schools in the ghettos, we banded together in the camps. And we fought back, we resisted, in so many different ways. We staged revolts against the Germans, not only in the Warsaw Ghetto uprising, but in a dozen different camps.And we remained remarkably optimistic, as evidenced by the large number of children born in the DP camps immediately after the war, demonstrating our desire to bring children into the world and rebuild the families we had lost. It is not for nothing that the official name of Holocaust Remembrance Day is Yom Hazikaron Lashoah velagvura (Holocaust and Heroism Remembrance Day), commemorating not just the carnage, but also the courage and bravery of so many of our people.FAITH.This, for me, is the hardest emotion of all to confront: Where do I place God in this horror? I cannot remove Him from the equation, for I have been taught that He is omnipresent, all-powerful, that He “neither slumbers nor sleeps.” But why would I – how could I – worship a deity who disappears when we need Him the most? I cannot fathom how he could have let such a catastrophe occur, how we almost disappeared from history, in such a tormented fashion, under His watch. I want to give up, to give in to my spiritual despair.But then I think of the Jews who baked matza in the ghetto, under penalty of death; the Jews who danced silently on Simhat Torah in the death camps, the Jews who prayed nightly under their breath, and entered the gas chambers with Shema on their lips. How can I – who lives a charmed life along with most everyone I know – be less faithful than these persecuted, pious Jews? And I think of the simple words found written on the wall of a cellar in Cologne, Germany, where Jews hid from the Nazis: I believe in the sun, even when it is not shining.
I believe in love, even when I cannot feel it.
I believe in God, even when He is silent.

There is one overriding reason to have faith, to believe. The customary salutation we offer mourners in their time of loss is, “May Hamakom comfort you along with all the mourners of Zion and Jerusalem.” Why the use of the word “Hamakom – the place” as the name of God? For me, certainly, the meaning is clear: This place of Israel, alive, dynamic, resplendent in a rebuilt capital of Jerusalem, affirms the conviction that no matter how much we suffer, we survive; no matter how much we bleed, we build, and that despite our pain, we persevere.Perhaps that is the most important emotion of all.

The writer is director of the Jewish Outreach Center of Ra’anana and a member of the Ra’anana City Council; jocmtv@netvision.net.il.
Advertisement
Subscribe for our daily newsletter