What are India’s options after Pathankot? 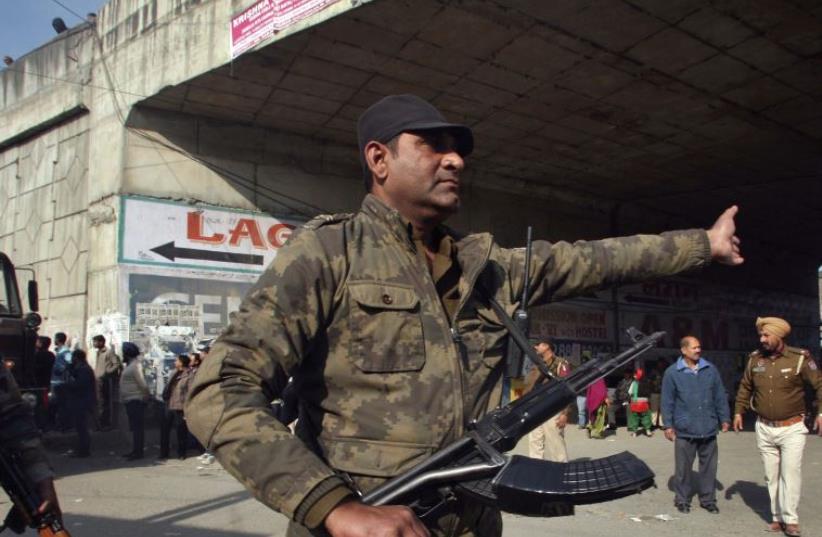 AN INDIAN security personnel asks people to move away from the area outside the Indian Air Force base at Pathankot in Punjab
(photo credit: REUTERS)
Advertisement
The terrorist attack on the Indian Air Force base in Pathankot in the border state of Punjab which started on January 2 (the siege lasted until January 5) have put a spanner in the works as far as India-Pakistan ties are concerned. Though Indian Prime Minister Narendra Modi in a major initiative had visited Pakistan on December 25 on his way back from Russia and Afghanistan to wish the Pakistani prime minister well on his birthday and attend his granddaughters’ wedding, the Pathankot attack has brought the fraught ties between the two neighbors almost back to square one. The immediate casualty of the terrorist attack was the foreign secretary-level talks scheduled to be held between the two sides.So, what are India’s options after Pathankot? Firstly, India can choose to continue the dialogue process with Pakistan.This will strengthen the civilian administration in Pakistan where there is a peace constituency. However, there still remain significant sections within the Pakistani army which are not in favor of peace with India. Every major Indian initiative has been followed by attacks which have sought to derail the peace process.After the Pathankot attacks, Modi called the terrorists “enemies of humanity” instead of directly mentioning Pakistan; signifying that his government wanted to give time to the fledgling peace process.Secondly, India has the option of suspending the dialogue process till Pakistan fulfils its earlier promises made after the Pathankot attacks and other terrorist attacks like the Mumbai attacks of November 2008. There still has not been much headway in the investigations into the Mumbai attacks, although India has repeatedly given proof to the Pakistani side. However, suspending the dialogue process will only give Pakistan more time and an excuse to delay the investigations at its end.Thirdly, New Delhi has the option of completely calling off the dialogue process. However, this is not a workable option as this means that the Indian and the Pakistani sides will have no leverage over each other and it will be very awkward for both sides since the top leaders and officials of the two countries will keep meeting each other at various international forums.Although things started on a bright note with Modi inviting his Pakistani counterpart to his inauguration back in May 2014, it was tempered by the fact that at the same time the inauguration was taking place, the Indian consulate in the Afghan city of Herat was attacked by terrorists. In August that year, foreign-secretary level talks were called off in the wake of the meeting of the Pakistani high commissioner in India with Kashmiri separatist leader Shabir Shah. Thereafter the ice was broken when the Indian and the Pakistani prime ministers met on the sidelines of the SCO meeting in Ufa in Russia in July last year and agreed to revive the peace process.Soon thereafter, in August last year national security adviser-level talks were called off as India insisted that the Pakistani adviser refrain from meeting Kashmiri separatists in India during his trip to India. However, Islamabad was not willing to do so.These talks between the two advisers were agreed upon when the Indian and the Pakistani prime ministers met at Ufa in Russia.BOTH THE countries have invested a significant amount of diplomatic capital in carrying on with the dialogue process which will be squandered if they decide to scrap it. At the same time, it is worth noting that there are many positive developments happening between India and Pakistan as well. The groundbreaking ceremony of the TAPI (Turkmenistan-Afghanistan- Pakistan-India) pipeline took place in December last year.Modi is slated to visit Pakistan later this year for the SAARC Summit.Unless he is able to show progress and a change in Pakistan’s support for anti-India terrorists, he will have a tough time explaining the visit to his domestic audience, which includes the opposition. When the ruling BJP (Bharatiya Janata Party) was in the opposition ranks, it had lambasted the then UPA (United Progressive Alliance) government for being soft toward Pakistan.There will also be many roadblocks to this peace process. The terrorist attacks in Pathankot also point to some glaring security lapses on the part of the security agencies in India and New Delhi will have to strengthen its intelligence-gathering mechanisms to prevent more terrorist attacks emanating from Pakistan. It also must guard against more such attacks by disgruntled elements within the Pakistani establishment and beyond. Talks with Pakistan make sense while walking away from the talks would only strengthen the hand of the hardliners in Pakistan. It is also in Pakistan’s own interest to tackle terrorism. As US secretary of state Hillary Clinton said, “you can’t keep snakes in your back yard and expect them to only bite your neighbors.”The author is currently a Research Fellow with the Japan Forum for Strategic Studies. He has earlier been a Visiting Fellow at the University of Cambridge (UK). The views expressed are personal. His twitter handle is @rupakj.