There still remains tremendous potential for the two countries to reach full economic cooperation in the areas of technological and agricultural development, as well as in many other areas.

By EHUD OLMERT
THE OFFICIAL residence of Kazakhstan’s president, and the Baiterek monument in the modern city of Nur-Sultan.
(photo credit: PAVEL MIKHEYEV/REUTERS)
Advertisement

The Republic of Kazakhstan is currently celebrating its 30th year of independence, after parting ways with the USSR. On this occasion, Israel is also celebrating 30 years of diplomatic relations between the two countries.

Many of us think about Kazakhstan as one of the countries that in the past was an integral part of Motherland Russia. At best, many Israelis see Kazakhstan as a tourist destination that they might one day visit after they’ve exhausted all the other more popular and familiar options.

Such an image, however, does this country a grave injustice. One is a small country, while the other is huge. Nineteen million people live in Kazakhstan, and it is one of the least populated countries that was formerly part of the former Russian empire.

This vast area is 140 times as large as the State of Israel and is home to thousands of streams and rivers, seven of which are over 1,000 km. long, as well as 48,000 lakes. The country is rich in natural resources, which are almost unlimited. 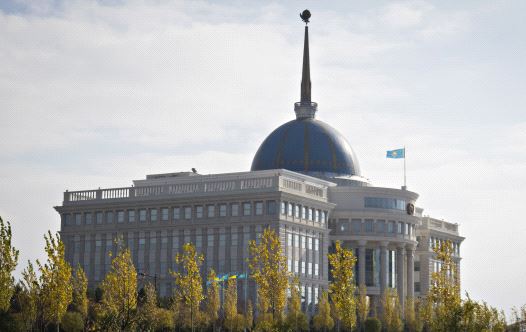 A general view of Akorda, the official residence of Kazakhstan's President, in Astana, Kazakhstan. (credit: REUTERS)

It has within its borders billions of tons of oil and over 1.8 trillion cu.m. of natural gas. Moreover, 20% of the earth’s uranium reserves are located in Kazakhstan.

These statistics are undoubtedly impressive and excite the imagination, and yet they fail to offer a clear picture of this country, the lifestyle of its population and its status vis-à-vis Asia, Europe, and to a large extent the rest of the world.

It certainly does not reflect the potential relationship it could have with the State of Israel.

From Kazakhstan’s first day as an independent state, the person who is rightly considered the father of the nation, Nursultan Nazarbayev, was intent on establishing full and intensive diplomatic relations with Israel. This relationship has only grown stronger over the years. The hand of Nazarbayev, who served longer than any other head of state of the other former Soviet republics, is evident in almost every aspect of this relationship.

There still remains tremendous potential for the two countries to reach full economic cooperation in the areas of technological and agricultural development, as well as in many other areas. This is the challenge these two countries will be facing for the foreseeable future.

In contrast with leaders of other neighboring countries, and although his regime in Kazakhstan was completely stable, president Nazarbayev resigned a couple of years ago, and was replaced by Kassym-Jomart Tokayev.

It’s true, Kazakhstan’s political structure might not resemble the democratic model that is normally found in Western countries; however, the country does enjoy impressive internal calmness and social stability, which has enabled it to become an economic power.

Most importantly, it has shown a desire to join the global community and to be a tolerant country striving for progress, accelerated modernity, and an improved quality of life for its citizens.

The most obvious example of this effort is Kazakhstan’s capital city, formerly called Astana and whose name was recently changed to Nur-Sultan, after the country’s first president who ruled Kazakhstan from its creation.

IN TERMS of political rules of the game, some might turn a blind eye to the lack of more aggressive political competition in Kazakhstan. Someone who compares it with the political culture in Israel, or with other countries that were part of the Soviet Union, might not necessarily like the dominant role Nazarbayev played.

But, as someone who knows Nazarbayev personally and has met with him on numerous occasions, I must point out that he is one of the most dynamic and visionary leaders in the world. He took a weak and backward country with the quality of life of a Third World country, and turned it into a modern, evolving and prosperous country that has a desire to connect with the international community and welcome innovation.

Kazakhstan is making strides to become a center for investment, which would help raise its commercial, cultural and sports sectors to new levels.

The capital city Nur-Sultan is a great example of this trend. Many Israelis who have traveled to Dubai following the peace agreements that were signed with the United Arab Emirates, have returned home mesmerized by the modernity, wealth and sophistication they found there.

The capital of Kazakhstan is just as great as Dubai in almost every way. Except for the weather, perhaps, which can drop to -40°C in the winter and rise as far as 50°C in the summer. This is not something that we are familiar with or can adapt to easily. But anyone driving down the road in Nur-Sultan cannot help but marvel at, and sometimes even envy, this modern city that has some of the most surprising and interesting architectural treasures in the entire world.

For example, the Baiterek monument, a 105m.-high tower in Nur-Sultan that was designed by award-winning British architect Norman Foster, is a symbol of the city. At the top of the tower, which was built in the shape of two branches of a tree, rests a nest with a golden egg inside of it belonging to a mythological bird called Samruk.

One of the city’s most prominent buildings is the Palace of Peace and Reconciliation, which was also designed by Foster. A third site designed by the British architect is the Khan Shatyr Entertainment Center, built in the shape of a leaning cone that is a giant tent the size of 10 soccer fields.

In addition to containing a huge shopping center, with each floor becoming narrower, Khan Shatyr also boasts a theater, a swimming pool and an entertainment center.

Apart from the monumental buildings designed by some of the world’s greatest architects, Nur-Sultan also sports numerous convention centers; a university that maintains academic relations with educational and research centers in many important countries; and modern sophisticated sports centers. In short, everything we would want to see in a modern and innovative city.

WHAT AROUSED my admiration of Nur-Sultan was actually something that in a country like ours is a source of anger, disgust and sometimes even great disappointment.

I was in Nur-Sultan in the winter when temperatures dropped below -40°C. The streets were crowded, and the roads were full of cars. There weren’t, however, any traffic jams, and I didn’t hear a single car honking or see any drivers losing patience. Everything was functioning smoothly; traffic was flowing efficiently, quickly and quietly.

It was not like you would expect from an Asian city in a country that is not viewed as the pinnacle of progress, but like a central city in an advanced western country would be expected to function. Almost 20 million people currently live in this city that just 20 years ago was a small and peripheral city.

Kazakhstan, under the leadership of its founding president Nazarbayev, is striving to become a major Asian-European capital, a center for the message of tolerance between East and West, between the world of yesteryear and a modern, advanced world. It is rapidly marching toward fulfilling this vision.

The State of Israel has wisely cultivated relations with Kazakhstan, even though perhaps there were quite a few people who were tempted to view the country as an arm of Russia’s former Soviet Union.

Kazakhstan is much more than that. Today, it stands on its own as an independent and free country that has natural and historical ties with its neighbor, Russia, but that also strives to engage in cooperation with other countries, including Israel.

On the anniversary of Kazakhstan’s 30th Independence Day, it’s wonderful that we can celebrate together 30 years of a flourishing relationship between the two countries.

The writer is a former Israeli prime minister.