Israel’s future as an energy exporter may require engaging Russia

One key to avoiding this predicament may be for Israel to engage Russia as a stakeholder in its energy development. 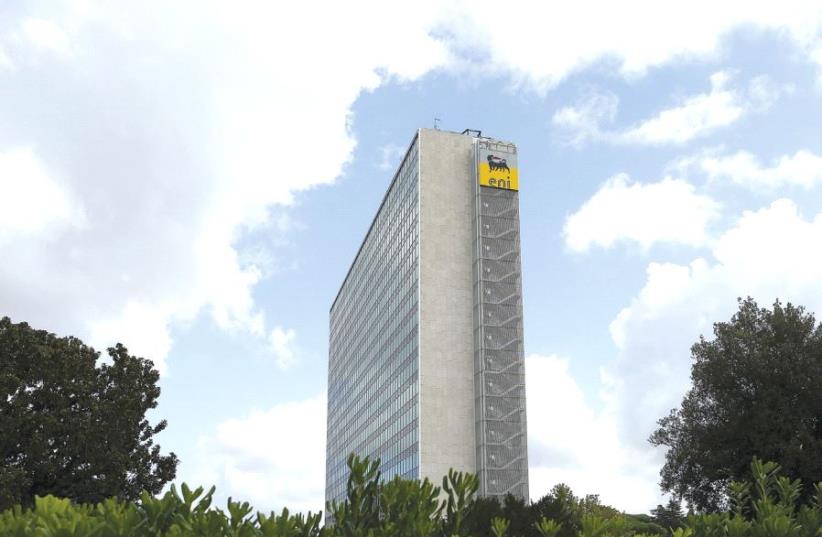 THE LOGO of oil company Eni is pictured at its headquarters in Rome, Italy. Eni’s giant Zohr gas find in Egypt is part of a wider energy sector in the Middle East
(photo credit: REUTERS)
Advertisement
One of Israel’s geopolitical facts of life is that it sits between Turkey and Egypt. These two major Middle Eastern actors also constitute Israel’s two possible export routes for bringing Israeli natural gas to market.However, Cairo’s announcement last week of impending new natural gas discoveries off Egypt’s coast combined with the disappointing results of last month’s historic Cyprus reunification talks in Geneva raise the specter that Israel may find itself without a way for its gas to reach international markets.One key to avoiding this predicament may be for Israel to engage Russia as a stakeholder in its energy development.Turkey’s Trans-Anatolian Pipeline (TANAP), as the main pipeline of the Southern Gas Corridor extending from Azerbaijan to Greece, Albania and Italy will create the possibility that Israeli natural gas transported to Turkey could be sold in EU markets in addition to the Turkish market. Construction work on the pipeline is ahead of schedule and TANAP is expected to become operational in 2018. Ankara’s visionary ambition is to make Turkey the main gateway for natural gas from the Middle East as well as Caspian Basin to reach EU energy markets by incorporating into TANAP natural gas from the Kurdish region of Iraq, and Israel.However, this mutually beneficial enterprise for Ankara and Jerusalem may be stymied in Nicosia, the divided capital of the ethnically split island of Cyprus. Any undersea gas pipeline from Israel’s Leviathan natural gas field to Turkey requires crossing Cyprus’ exclusive economic zone, pegging the future of the pipeline to the island’s political reunification. Thus, mid-January’s historic Cyprus reunification summit in Geneva – the first international talks to include Turkey, Greece and the UK since 1960 – raised great hopes that the last political hurdle to an Israel-Turkey gas pipeline would be cleared. Disappointing heightened expectations, the talks failed to arrive at a settlement and the parties are scrambling to convene another international summit next month in Nicosia to maintain momentum and overcome the impasse.The success of this new March Cyprus reunification summit assumed a new and critical urgency for Israel last week when, on February 2, 2017, Egyptian Oil Minister Tarek el-Molla publicly indicated that Egypt may announce new discoveries of natural gas during the second half of 2017. Along with the minister’s remarks, Muhammad el-Masry, the chairman of the stateowned Egyptian Natural Gas Holding Company, told reporters in Cairo that Egypt will start exporting natural gas in 2019, a potential hint that the new gas finds could be of significant size.In 2015, the Italian energy giant Eni announced the discovery of the Zohr natural gas field in the Shorouk concession off Egypt’s coast. Supplanting Israel’s Leviathan field as the largest gas find in the Eastern Mediterranean, Egypt’s Zohr field contains 850 billion cubic centimeters of natural gas, although not all of Zohr’s gas is recoverable.While most of the gas produced at Zohr is slated for Egypt’s domestic market, new finds of recoverable natural gas in the Shorouk concession could supply Egypt’s dormant liquefied natural gas (LNG) plants. Should these finds contain sufficiently large volumes of recoverable natural gas, Egypt would not need additional gas from neighboring suppliers such as Israel and Cyprus to become a net natural gas exporter and significant supplier of LNG to Europe.THE STRATEGIC picture for Israel is further complicated with Russia’s recent acquisition of a major stake in the Egypt’s gas industry. On December 12, 2016, Eni agreed to sell a 30% stake in the Zohr field off of Egypt’s coast to Russia’s Rosneft for $1.575 billion, making Moscow the second largest stakeholder in Zohr. As Egyptian President Abdel Fattah Sisi’s office stated, Moscow’s acquisitions of a share of the Zohr field was part of Cairo’s commitment “to cooperate with Russian companies in all spheres, including [the] oil and gas sector[s], taking into account the immense experience and potential of Russian companies.” In contrast, Israel has cordially declined several overtures from Moscow to participate in the development of Israel’s gas industry.Because TANAP will turn Turkey into a strategic transit corridor for non-Russian natural gas to reach EU markets, Moscow now has a strong interest to promote competing Egyptian LNG exports to hamper the inclusion of Israeli and Cypriot natural gas in TANAP. Enjoying deep popularity among a sizable segment of the Greek Cypriot population, Russia could also attempt to incentivize Greek Cypriots to reject a reunification settlement. It may behoove all parties interested in a Cyprus settlement to consider how to include Russia in the commercial benefits of region-wide natural gas cooperation in the Eastern Mediterranean.As 2017 progresses, Israel’s energy diplomacy could face its greatest challenge since Leviathan’s discovery in 2010. Adapting to the new energy and geopolitical landscape of the Eastern Mediterranean may require a more accommodating posture toward Moscow’s commercial energy interests, even to the point of making Moscow a stakeholder in Israeli natural gas production.The author is a fellow in the Middle East and Asia Units at the Truman Research Institute for the Advancement of Peace at the Hebrew University of Jerusalem.