Not only has Israel repeatedly denied having any designs on al-Aksa, it has repeatedly enforced its ban on Jewish prayer on the Mount. 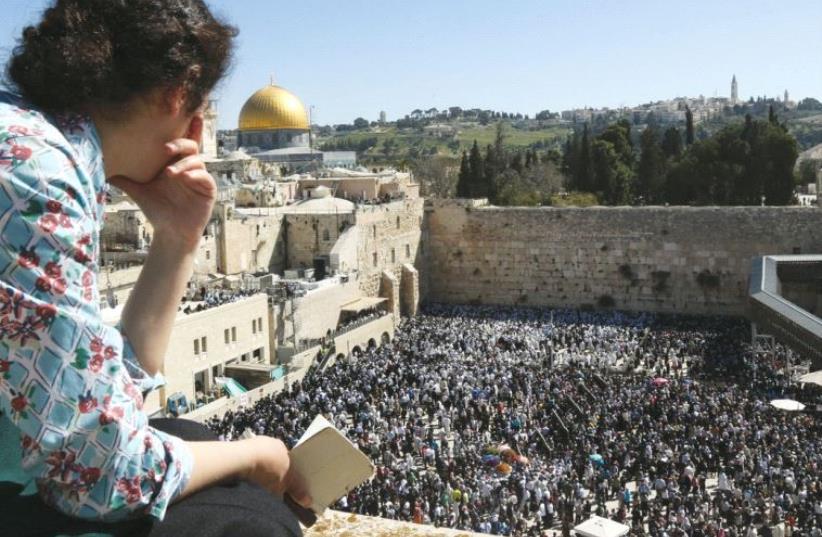 Western Wall
(photo credit: MARC ISRAEL SELLEM)
Advertisement
At the UN last week, Jordan’s King Abdullah made an impassioned defense of the majority of the world’s 1.6 billion Muslims who desire to live in peace and declared war on the small minority of jihadist terrorists who defile the name of Allah. He misattributed, however, the cause of the region’s conflicts – from the Syrian civil war to Islamic State’s jihad to establish a caliphate – to the absence of a Palestinian state.“No injustice has spread more bitter fruit than the denial of a Palestinian state,” Abdullah warned. “Peace is a conscious decision. Israel has to embrace peace or eventually be engulfed in a sea of hatred in a region of turmoil.”The Israeli ship of state has been sailing in a sea of Arab hatred since independence in 1948, and struck by squalls of terrorism for a century before that. Despite this, Israel has managed to achieve peace treaties with Egypt and Jordan, and cooperates with both countries in areas ranging from defense to regional development, not to mention a recent thawing of relations with Saudi Arabia.The king proudly evoked Jordan’s role as custodian of Muslim holy places in Jerusalem – a role awarded by then-defense minister Moshe Dayan immediately after the Six Day War, to ensure Muslim worship. Abdullah, however, mentioned only the Christian and Muslim holy sites he is entrusted with safeguarding.“As the custodian of Islamic holy sites in Jerusalem, I will continue my efforts to protect these places, and stand up against all violations of their sanctity, including attempts for temporal and spatial division of al-Aksa Mosque/al-Haram al-Sharif,” he said. “The Hashemite custodianship is a sacred duty. We reject threats to the holy places and the Arab character of this holy city.”While the persistent denial of Jewish history is a clumsy propaganda ploy on the part of the PA, it only serves to perpetuate the conflict if Jordan acquiesces to President Mahmoud Abbas’s intimidation. The king is far too wise to take seriously the inciter of Palestinian jihadists, who calls almost daily to “defend” al-Aksa from the evil Zionists.Not only has Israel repeatedly denied having any designs on al-Aksa, it has repeatedly enforced its ban on Jewish prayer on the Mount. The absurd goodwill gesture of not allowing Jews to pray near the site of the Temples is wasted on the custodians, who do nothing to stem periodic riots on the Mount.In his speech to the General Assembly, Abdullah condemned Islamist terrorists who “want to wipe out our achievements and those of our ancestors; to erase human civilization, and drag us back to the dark ages.” The king might have included Palestinian terrorists who share those goals, at least as far as Israel is concerned.He might have mentioned Jordan’s own short-lived effort to help maintain peace on the Temple Mount. This past March, the kingdom announced plans to set up 55 closed-circuit cameras to monitor the site, 24/7, and broadcast live footage over the Internet – but not to help the Israeli authorities arrest Palestinian extremists bombarding Jewish worshipers with rocks, firebombs and firecrackers.“The goal is to document the violations and infringements in the mosque complex by the Israeli authorities and present it to the world,” Jordanian Minister of Holy Sites Heyal Daoud said.Nevertheless, Israel welcomed the plan, which was mediated by US Secretary of State John Kerry, because it would reveal that the constant violence on the Mount was initiated by Muslims. But barely a month after the plan was announced, Palestinians plastered the Temple Mount with warnings that they would destroy the security cameras, which they said would be used by Israel to crack down on rioters.Then-prime minister Abdullah Ensour hastily announced Jordan’s decision to drop its plan to install security cameras on the Temple Mount.Though he said the plan’s goal was to document “recurring assaults” by Israelis on the sanctity of the holy site, he noted that the cameras would have brought “legal, political and media benefits” to the Muslims.In his UN address, Abdullah asked the world leaders, “When and how did fear and intimidation creep so insidiously into our conversation when there is so much more to be said about the love of God?” Abdullah should take some of his own advice and, instead of heaping blame on Israel, embrace the efforts the Jewish state is making to forge stability in the region.