Why would a Greek airline apologize to the PA for Israelis’ behavior toward fellow Israelis? 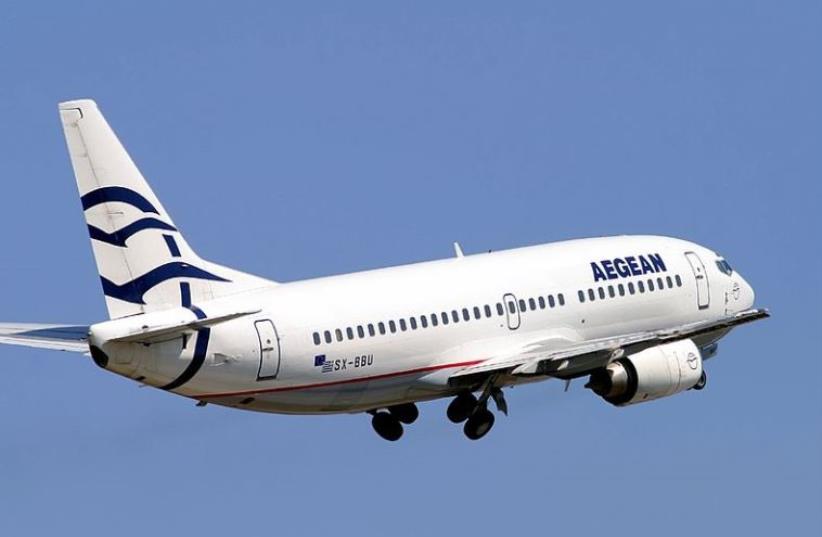 Aegean Airlines jet [File]
(photo credit: WIKIMEDIA COMMONS/JETPIX)
Advertisement
An incident this week revealed that the country’s preoccupation with terrorist attacks has just been a diversion, drawing our attention away from the real danger to Zionism: The wholesale theft of Israel’s Arab citizenry by the Palestinian Authority.This dramatic shift in population became manifest in Greece, whose Aegean Airlines made a formal apology to PA leaders for forcing two Arab-Israeli passengers to leave an airliner because of a protest by Jewish-Israeli travelers.Why would a Greek airline apologize to the PA for Israelis’ behavior toward fellow Israelis? Claiming the two Arabs posed a security threat on the Athens-Tel Aviv flight, several Jewish passengers refused to sit down, preventing the plane from taking off, and eventually making their two countrymen spend another night in Greece while they flew smugly home.Aegean CEO Dimitrios Gerogiannis wrote a letter to Saeb Erekat, the PLO’s secretary-general, saying that “we would like to express once again as we did several times to the international media our greatest regrets for the event.”A statement by Aegean said, “On the scheduled Aegean flight A3 928 from Athens to Tel Aviv on January the 3rd, a small group of passengers very vocally and persistently asked for two other Israeli passengers to be checked for security issues.“While it is indeed unfortunate that they were possibly racially profiling the customers, indeed their fellow Israelis, because safety must be first, the pilot did feel compelled to delay the flight call the police so to check again the two Israeli passengers’ documents and identities. This did take some time, of course, but the documents were indeed checked and were okay.”The letter was posted after Erekat issued a statement online Wednesday saying he was “outraged by how two Palestinians were treated with discrimination and prejudice at the hands of the Aegean cabin crew.”It would not be unusual for Hamas to claim the Israeli- Arab population for its own; indeed the terrorist organization often refers to Arab Israelis as “Arabs from 1948,” but now the Palestinian Authority has apparently bestowed Palestinian citizenship on Israeli Arabs.While many Arab citizens no doubt identify with Palestinian nationalist aspirations in general, if not full-hearted support for de facto Palestinian Authority President for Life Mahmoud Abbas, recent polls indicate that Erekat and company should not take this for granted.Indeed, a recent poll by Israel Prize laureate Prof. Sammy Smooha, a University of Haifa sociologist, found that Israeli Arabs have increasingly accepted Israel as a majority Jewish state and their role in it as citizens. In other words, more Israeli Arabs are defining themselves as Israeli Arabs and not as Palestinians.Smooha’s research shows that between 2012 and 2013 the proportion of Israeli Arabs who accept Israel’s right to exist as a Jewish and democratic state rose to 52.8 percent from 47.4%; the percentage who believe Israel can exist as a Jewish majority state increased to 43.1% from 29.6% a year earlier. Significantly, Israeli Arabs who do not identify themselves as Palestinians increased from 32.5% in 2012 to 42.5% in 2013.At least until 2013, Smooha found that 63.5% of Israeli Arabs consider Israel to be a good place to live, up from 58.5% in 2012. This is not to say that Israeli Arabs are entirely satisfied with their lot.Opinion polls conducted among Arab citizens in Israel over the summer by the StatNet Research Institute show that Israel’s Arab citizens feel discrimination on a both a societal and institutional level. According to a poll published in October by Maariv at the outset of the ongoing surge in terrorist attacks, fully two-thirds (65%) of Arab citizens said they don’t feel safe in the country’s Jewish communities. In other words, most Israeli Arabs do not feel safe in their own country.Israeli Arabs are evenly split over whether Arab Knesset members represent them – about 41% agree and disagree.They also believe that Arab parliamentarians have no real power, given that no Arab party has ever been part of the governing coalition.The Israel Democracy Institute and Tel Aviv University’s monthly Peace Index Poll for December found that Jewish and Arab citizens have at least attained near parity in their fear of suffering harm from terrorism. Jewish Israelis’ fear has grown steadily from 57% in October to 70% today; while among Israeli Arabs, 65.5% fear being harmed in a terrorist attack.