While talk of Palestinian unity might sound nice, there is little reason for optimism. 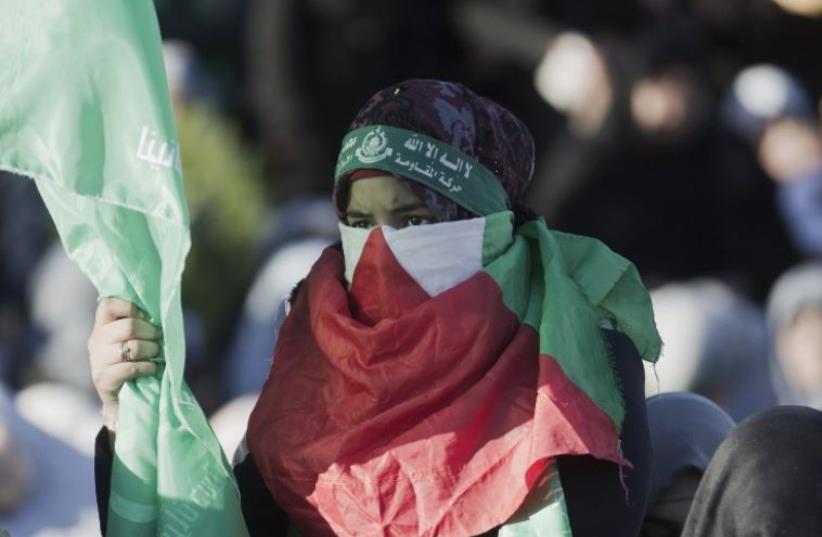 A Palestinian woman covering her face with her national flag takes part in an anti-Israel rally in Gaza City
(photo credit: AFP PHOTO)
Advertisement
Sources close to both Hamas and Fatah are claiming that the two may have reached a breakthrough in talks taking place in Doha, Qatar. But how serious are these reports? Specific details regarding a reconciliation deal are sparse.Some sources claim Fatah and Hamas have agreed to form a “national unity” government and hold parliamentary elections within six months.Other, more pessimistic, reports claim the talks may have stalled and the only thing agreed upon by the sides is that neither Hamas nor Fatah officials will speak with the news media about any purported deal.Fatah and Hamas have repeatedly failed to reconcile their differences since Hamas’s violent takeover of the Gaza Strip in 2007.There was the 2007 Mecca Agreement and the 2011 Cairo Agreement and, in 2014, the sides signed the Beach Refugee Agreement. But none of these has led to sustained reconciliation or parliamentary elections, which have not taken place in the West Bank and Gaza in a decade.Both sides are quick to blame the US, Israel and other countries for sabotaging reconciliation attempts.True, the US has not hidden its dissatisfaction with a Palestinian government that includes Hamas. After the Beach Refugee Camp Agreement, US President Barack Obama said in April 2014 that Palestinian Authority President Mahmoud Abbas’s decision to form a national unity government with Hamas was “unhelpful” and undermined negotiations with Israel.But the reality is that while leaders from both Hamas and Fatah use lofty language to convey to their followers the importance of Palestinian unity, this talk is mainly for local consumption. Both Hamas and Fatah must pay lip service to the ideal of unity.As a Palestinian political leader, one cannot openly be opposed to unity. Doing so would be a contradiction to one of the most heart-felt principles of Palestinian society.Who, after all, can claim to favor internecine war? However, the actions of both Fatah and Hamas speak louder than their platitudes. Hardly a day goes by without Fatah arresting a West Bank Palestinian accused of ties with Hamas. Many of those arrested are university students. This week, families of Fatah’s political prisoners demonstrated in Nablus against the arrests.Fatah’s ongoing crackdown against Hamas activists is made possible through military coordination with Israel.In fact, it would not be an exaggeration to say that Abbas and Fatah remain in power on the West Bank thanks to this military coordination. And though Abbas has threatened on a number of occasions to end this coordination, these are empty threats that are for local consumption, like Abbas’s calls for unity with Hamas.Hamas, meanwhile, has refused to budge from its hardline ideology and its active support for violence against Israel.The terrorist group refuses to renounce terrorism, recognize Israel or honor past agreements signed between the Palestinians and Israel. These are the three conditions that the Quartet – the US, the UN the EU and Russia – demanded of Hamas before it agreed to recognize a Palestinian government that included Hamas.Not only has it refused to accept any of these conditions, Hamas continues to declare openly its intention to use violence against Israel – and against Palestinians who dare to coordinate security arrangements with Israel.Another factor mitigating against a reconciliation deal is the tension that exists between Egypt and Qatar, the country hosting the talks between Hamas and Fatah. No unity agreement can succeed without Egyptian involvement.Yet, it is difficult to see Egypt and Qatar working together.While talk of Palestinian unity might sound nice, there is little reason for optimism. Ultimately, so long as Palestinians are unable to settle their own differences, it is impossible to envision Israelis and Palestinians resolving their conflict.Blaming the US or Israel for the split in Palestinian political leadership might calm their own conscience, but until Palestinians start taking responsibility for their national destiny, internal unity and peace with Israel will remain out of reach.As the wave of terrorism against Israelis continues, it is high time that the Palestinian leadership asserted its control, stop the violence, halt the incitement and resume a peaceful dialogue with Israel.