The young US administration has been plagued by scandals. 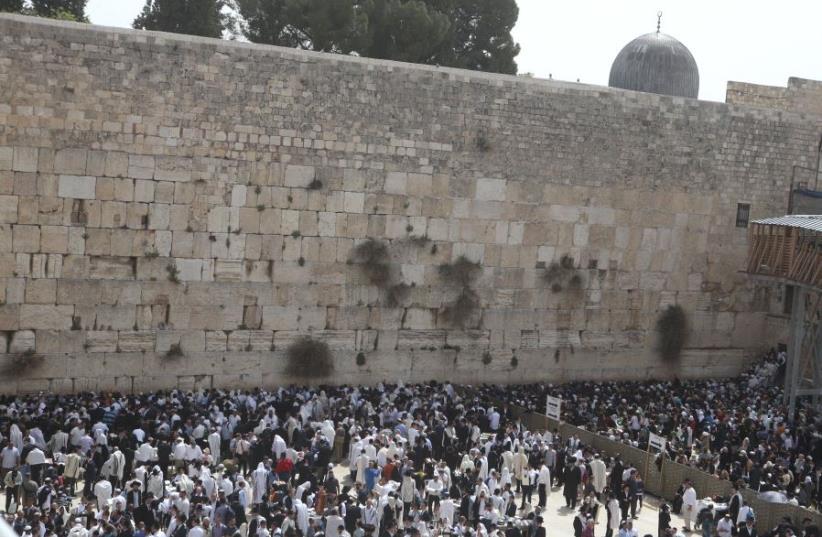 Priestly blessing at the Western Wall
(photo credit: MARC ISRAEL SELLEM)
Advertisement
President Donald Trump is expected to visit the Western Wall during his two-day visit to Israel next week.If he does, he will be the first US president to go to the holy site while in office, a major symbolic breaking with past protocol. He will likely not, however, be accompanied by Israeli officials, a decision that distances US official recognition that the Wall is part of Israel, a symbolic snub.For the Jewish people the visit is a positive, but for Israel’s sovereignty it may be a negative.The young US administration has been plagued by scandals.Some of them relate directly to Israel, including the allegations that Trump shared sensitive intelligence with Russia that came from Israel. The US president has canceled his plans to speak at Masada and the promises to move the US Embassy to the capital have been put on the back burner.It isn’t clear if he will go to Yad Vashem or for how long.But the Kotel looms especially large, due to its holiness to the Jewish people.The first controversy over Trump’s visit came on Monday, when a US official coordinating the trip told Israeli counterparts the Kotel is “not in your territory” and that the Americans didn’t want Israeli officials present when the president goes there. “The statement that the Western Wall is on territory in the West Bank was astonishing,” an official in the Prime Minister’s office. In contrast, the new US ambassador, David Friedman, visited the Kotel on Monday and spoke glowingly. “I’ve come straight to the holiest place in the entire Jewish world.”On Tuesday, National Security Adviser H.R. McMaster was pressed to say whether the US viewed the Wall as part of Israel. He refused to answer, saying it was a “policy decision.”To confuse matters, US Ambassador to the UN Nikki Haley then told the Christian Broadcasting Network that “the Western Wall is part of Israel and I think that is how we have always seen it and that is how we should pursue it.”The battles over the Western Wall reflect the traditional clash between the policy of the State Department and other parts of the US government which are more sympathetic to Israeli policy in Jerusalem. Since the UN Partition plan of 1947 called on Jerusalem to be part of a “special international regime administered by the United Nations,” the US has never recognized Israeli sovereignty in any part of the city. The first US ambassador to Israel, James McDonald, was instructed not to attend the opening session of the Knesset in Jerusalem in 1949. “If I were to go to Jerusalem to attend the function, that might be regarded as US tacit approval of the Israel claim to Jerusalem,” he recalled in his memoirs, My Mission in Israel 1948-1951. US policy has changed since then, but not in its overall rejection of Israeli rights to the Kotel. Since the Oslo period, the US has indicated it would be willing to move its embassy and recognize Israeli rights in Jerusalem if Israel signed a peace agreement with the Palestinians and the Palestinians agree to the changes in US policy. That gives Palestinians veto power over Israel’s rights to Judaism’s holiest accessible site in the world.Trump’s visit should include a visit to the Western Wall even if he is not accompanied by President Reuven Rivlin or Prime Minister Benjamin Netanyahu. Trump is visiting Saudi Arabia and the Vatican, where he will make symbolic statements about Islam and Christianity, so it is fitting that he should also go to Judaism’s holy site.When it comes to gaining official recognition for Israel’s rights to the Kotel from the US and the international community, Israel faces an uphill battle. The Palestinians and Jordan, which is a steward of the Islamic holy sites in Jerusalem, deeply oppose Israel’s claims and there is little prospect that any peace agreement will affirm them. Since the 1930s, Islamic activists have sought to reduce Jewish rights to the Western Wall, calling it an Islamic site. The hostile resolutions at UNESCO have also sought to reduce the Jewish connection to Jerusalem.Against this onslaught Israel has very few allies in the international community that will affirm Jerusalem’s rights over the Old City or east Jerusalem, or even the Western Wall itself. That isn’t likely to change. But Israel can try to make inroads with allies such as Ambassador Haley and the administration to chip away at the iron wall the Palestinians have erected against Israel’s right to the Kotel.