My two cents on the academic boycott 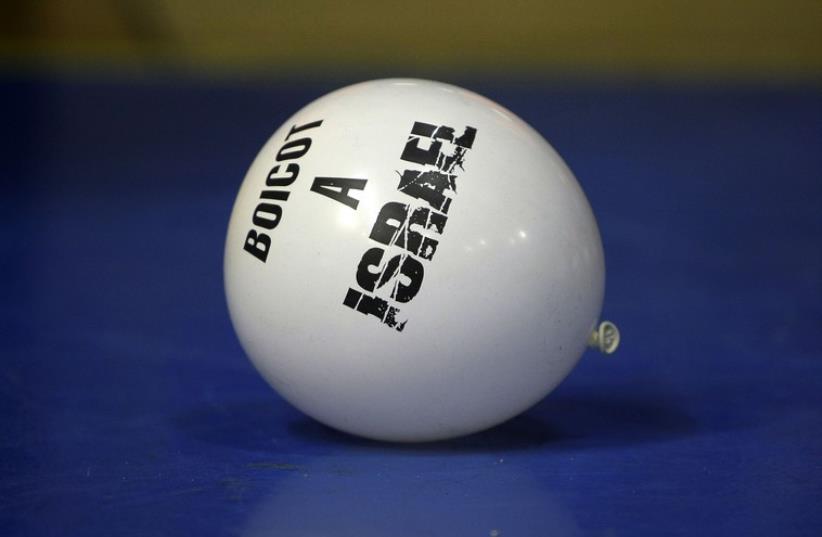 A balloon with the phrase "Boycott to Israel" is seen during a Euroleague basketball game between Maccabi Tel Aviv and Barcelona in Barcelona
(photo credit: REUTERS)
Advertisement
For many, the recently approved European labeling of settlement products to give consumers the choice of boycotting Israel is only the first step in the right direction. A large group of Europeans are joining the so-called Boycott, Divestment, Sanctions (BDS) movement’s call for an academic boycott. The movement seeks to find a solution to the Israeli-Palestinian conflict by isolating Israel politically, commercial and culturally, with the aim of forcing it to withdraw from the West Bank.For a long time a fringe movement it has now moved into academia, including the university where I am working towards my PhD, Oxford.Even though very few out of the 343 British academics that signed a petition to boycott Israeli academic institutions last October were from Oxford, the opposition to the country and anyone studying it is quite noticeable.I came to Israel in October to begin an academic year as a visiting scholar at two Israeli institutions: The Hebrew University of Jerusalem and Tel Aviv University. My research focuses on political dynamics in the Yishuv, during the British Mandate period, and I wanted to spend a prolonged period in Israel to gather data for my thesis. From the very beginning, the institutions which I contacted were nothing but welcoming.I found a professor at Hebrew University who meets me regularly without receiving anything in return, who is helpful, kind and open to all sorts of suggestions and opinions, even when sensitive political issues are at stake. At Tel Aviv University I have attended seminars and lectures where Arabs and Jews participated, commending and criticizing each other openly, but with great respect and mutual understanding.Academics of all social, ethnic and religious backgrounds can be found working together in harmony, yet not ignoring the difficulties which still plague the relationship between them in this country. Access to Israel’s well-organized and comprehensive academic resources is free of cost, also to somebody like me, who is again not giving the country anything in return.Those who advocate the boycott of Israel’s academic institutions imagine a place where ethnic stereotypes are reproduced, where government policy in the West Bank and Gaza is uncritically supported and where debate has no place. I can only speak of the few institutions that I have visited, and by no means do I wish to imply that this country’s academia is faultless as to the political situation in the country. But it would be a shame if people who produce such high-quality intellectual work and who have received me so well in their academic institutions were not able to continue receiving the same treatment in our European institutions.The author is a PhD student in politics at Oxford University, where she studies politics in the Yishuv during the British Mandate and politics in Lebanon during the French Mandate. She is currently a visiting doctoral researcher at Hebrew University and Tel Aviv University.