Netanyahu didn’t quite get his way with public broadcasting

Recent actions reflect major problems involved in Netanyahu’s insistence on serving as communications minister, a post which he uses to promote his personal political survival. 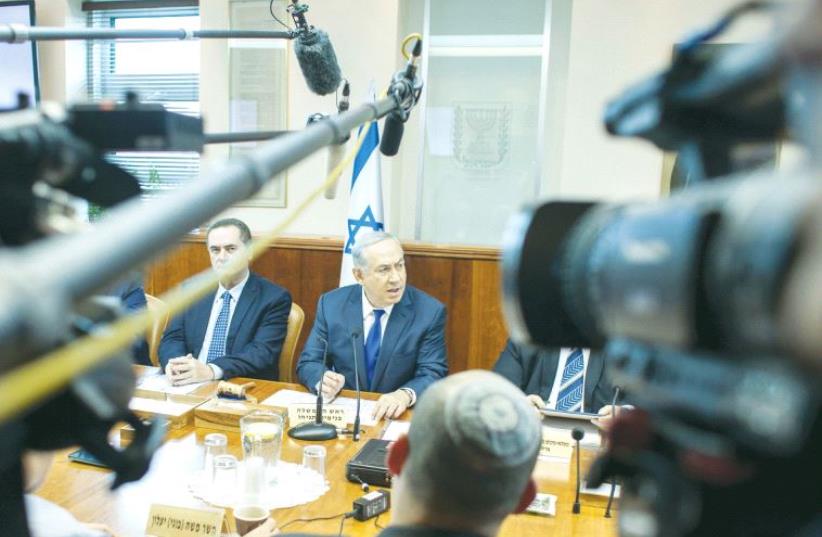 PRIME MINISTER Benjamin Netanyahu addresses a recent weekly cabinet meeting in Jerusalem
(photo credit: REUTERS)
Advertisement
Two of the numerous laws passed on the last day of the Knesset’s summer session well reflect the current balance between Prime Minister Benjamin Netanyahu and the Knesset.The first of the two government-initiated bills was an amendment to the Knesset Broadcasts Law designed to lay the ground for a tender for the Knesset Channel’s new operator, after the concession of the current operator – Channel 2 – runs out in May 2017. The second was an amendment to the Public Broadcasting Law designed to delay the beginning of operation of the new Public Broadcasting Corporation, established last year and which is to replace the old Broadcasting Authority.My first reaction to the proposed amendment of the Knesset Broadcasts Law was “if it ain’t broke, don’t fix it.” I am a great fan of the Knesset Channel, which represents neutral public broadcasting at its best. In other words, I couldn’t understand why Channel 2’s concession wasn’t simply extended.However, when I delved a little more deeply into the issue I discovered that the amendment was based on a serious report of a public committee, appointed by the Knesset to examine the operation of the Knesset Channel, many of whose recommendations make a lot of sense both in technical and content terms.I also discovered that the final draft of the bill presented to the Knesset on August 3 by the new chairman of the House Committee, MK Yoav Kisch (Likud), had been worked out by him in cooperation with MK Micky Rosenthal of the Labor Party – a former journalist with serious credentials – and that what they came up with was an honorable compromise on various controversial issues.Three of these issues concerned the provisions regarding who was eligible to participate in the tender to operate the channel, the makeup of the channel’s regulatory body, and a provision to the effect that the channel should not broadcast items that degrade the Knesset.The concerns of those who objected to the bill included fear that the prime minister (who is also communications minister) intended to qualify some of his cronies, who do not have appropriate experience, to compete for the tender; fear that including political appointees to the makeup of the regulatory body would compromise the channel’s neutrality; and fear that the provision regarding items that allegedly degrade the Knesset could be used as a form of censorship.On all these issues reasonable compromises were worked out, which I suspect were not to Netanyahu’s liking.The amendment to the Public Broadcasting Law is a much more complicated case. It was Gilad Erdan, as communications minister in Netanyahu’s previous government, who initiated the move to replace the wasteful and somewhat corrupt Israel Broadcasting Authority with a new Public Broadcasting Corporation, which was to start operation on September 30, 2016.However, Netanyahu decided not to reappoint Erdan – a potential contender to replace him as leader of the Likud – as communications minister in his current government, and his decision to try to put off the beginning of the operation of the new broadcasting corporation until January 2018, with the flimsy excuse that the new corporation is not yet ready, smacks of ulterior motives.An odd proposal by the chairman of the coalition, MK David Bitan, to reverse the whole process and let the old Broadcasting Authority continue to function despite a broad consensus that it is beyond saving, seems to verify the suspicion that Netanyahu doesn’t want the new corporation, especially if is unable to control it. In addition, his constant harping on his support for free competition in the sphere of broadcasting, and his general aversion to public services, suggest that unlike Erdan he might actually consider public broadcasting to be superfluous.The bill was prepared for second and third readings by the Economic Committee, chaired by MK Eitan Kabel of Labor, and in this case as well a compromise was found on several issues, the most important of which was that the new corporation will start operating at the latest on April 30, 2017.The reality which these two examples reflects is first of all that despite all the difficulties and bad blood, the Knesset actually manages to perform its duty effectively, and does not operate as a rubber stamp for the prime minister’s whims.However, these examples also reflect major problems involved in Netanyahu’s insistence on serving as communications minister, a post which he uses to promote his personal political survival, and is a manifestation of dysfunction in his government.The latter was observed in the government debate last week on public broadcasting, in which ministers from Bayit Yehudi attacked Netanyahu’s alleged paranoia on this issue, while Erdan confronted Culture and Sports Minister Miri Regev contemptuously, after Regev had stated that “it cannot be that we establish a corporation that we cannot control,” which reflects what Netanyahu thinks but dares not say. Another Likud minister – Gila Gamliel – referred to Regev’s words as “utterances bordering on fascism.”In the current highly charged political atmosphere, I draw encouragement from the way the two bills were dealt with, since it proved that despite everything the Israeli democracy is still alive and kicking – at least for the time being.The writer is a political scientist, and a retired Knesset employee.