Lust should lead to love, passion to intimacy, physical attraction to emotional oneness. 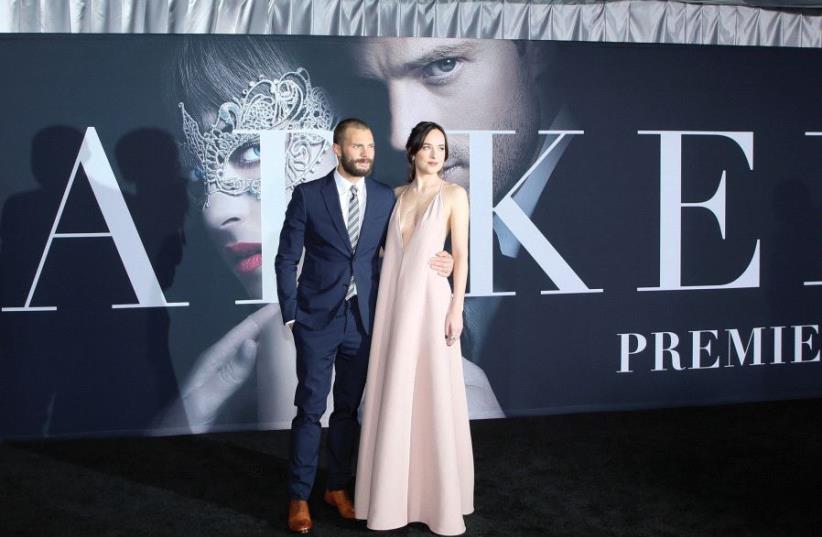 Cast members Jamie Dornan and Dakota Johnson pose at the premiere of the film ‘Fifty Shades Darker’ in Los Angeles last week
(photo credit: REUTERS)
Advertisement
The new movie Fifty Shades Darker accomplishes the seemingly impossible task of making erotica as interesting as Bernie Sanders’ ties. In this sequel to Fifty Shades of Grey, Christian and Anastasia are once again at it like rabbits, only rabbits seem to be much more passionate about the exercise. As I watched the movie I could almost hear the director yelling in the background, “OK guys, you’re in middle of dinner at your mom’s house. You’ve gone 10 minutes without doing it. Time to strip off and do it again... Coffee at Starbucks? Let’s go people. Rip that shirt off for another incredible episode of three-minute sex.”Christian Grey, the billionaire “dominant” with a couple of screws loose is supposed to be a wild sex machine. But one has to wonder how good he can be in bed given his apparent belief that foreplay has something to do with golf. And as far as the S&M/bondage stuff that gave the Fifty Shades series its reputation, in Fifty Shades Darker it seemed to consist mostly of the occasional spanking that, in the theater I watched it at, was provoking laughter from audience members.All in all the movie had a ‘80’s celluloid porn flick feel to it. With some cheap music and pizza-delivery man added, the experience would have been complete (or so my friends tell me).There is a reason all this matters, and not because I’m a movie critic. I’m not. But I am a writer on love, sexuality and relationships and when Fifty Shades of Grey comes to dominate what we believe to be erotic and exciting, it’s a commentary on our own shallowness.Fifty Shades of Grey employs the three ingredients of what we consider erotic and sexy. First, a super-rich guy. Aren’t women turned on by success? Second, a young, beautiful woman with just enough innocence to lend her a slightly naïve quality.Third, a man and a woman who can’t keep their hands off each other. Plus plenty of naked flesh.But if this was the formula for success, the movie would not have gotten such a low rating on Rotten Tomatoes and left audiences across America catatonic.In truth erotica is based on three different principles, all of which are violated by the Fifty Shades movie series.The first is unavailability. The second is mystery. And the third is sinfulness.The book series portrayed Anastasia as a complete virgin, rare for a modern American college co-ed. It was done intentionally. She’s unavailable, mysterious, and sex with her is utterly sinful. It’s precisely these qualities, rather than her beauty, which draws Christian to her. The science of attraction is 80% the qualities I just enumerated, with physical attraction being responsible for – at most – the remaining 20%.Don’t believe me? Ask yourselves why men who have stunningly gorgeous wives still cheat, often with women who would be objectively considered less attractive? Because the mistress is unavailable, mysterious and sinful where a wife, to her husband, is not necessary so.The same applies to Christian, who in the book series is dark, mysterious and definitely sinful. Women readers across America fell in lust with Christian as they painted a mental image of what he looked like and how he behaved.But once Hollywood got involved, Christian devolved into a hunky, brawny billionaire bore. Bereft of imagination, he instead throws money at everything. Riddled with insecurities, he shows uncontrollable jealousy even as studies show that what most attracts women to men is confidence. And in bed, for all his interesting accouterments he’s a one-trick pony, guilty of goal-orientation which he just cannot transcend. In short, the film version of Christian is predictable, shallow and ineloquent.A few weeks ago I addressed an audience in the Bahamas on the three principles of kosher lust as captured in my book of the same title. Many there were not Jewish. But that didn’t stop me from telling them that the Jewish laws of marriage are universally applicable. They mandate unavailability, by imposing a period of monthly sexual separation; mystery, by insisting that husbands and wives not walk around the bedroom naked in front of one another so as never to de-eroticize or de-magnetize the human body; and sinfulness by actually making husband and wife temporarily forbidden to one another.An astute Christian woman asked me, “In that case, how are we supposed to love in the midst of lust?” But the separation of love from lust is what The Fifty Shades of Grey series is most guilty of. Christian is portrayed as getting instantly bored of women once they submit to him, when in truth lust should lead to love, passion to intimacy, physical attraction to emotional oneness.Sex is a critical part of every relationship; desire its very essence. The series was right to focus us on the lust and desire that seems to be lacking in today’s relationships. Its formula for sustaining it, however, is as stale and unimaginative as the movies themselves.The author, “America’s rabbi,” is the international bestselling author of 30 books including Kosher Sex, Kosher Adultery, Dating Secrets of the Ten Commandments and his newest book, Kosher Lust. Follow him on Twitter @RabbiShmuley.