Like the flu, each time terrorism breaks out there is a slight variation. 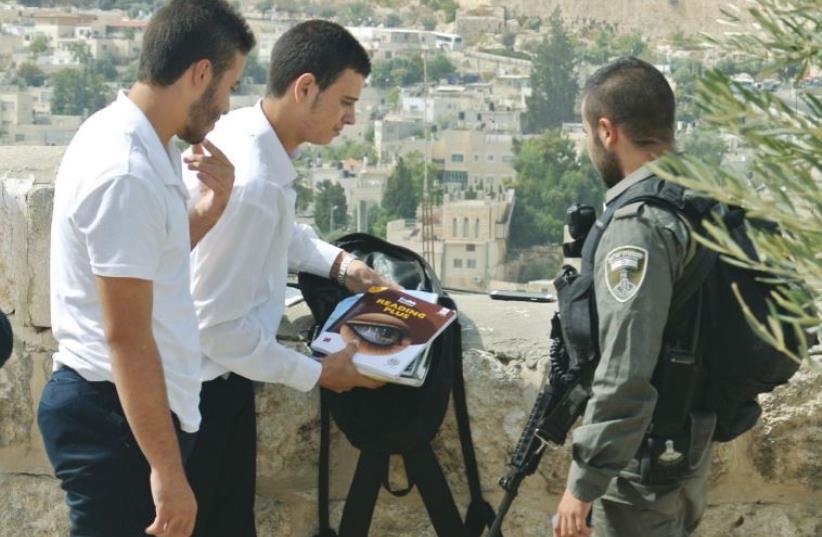 Police search two Arab students in east Jerusalem
(photo credit: SETH J. FRANTZMAN)
Advertisement
“Wave: a disturbance or variation that transfers energy progressively from point to point” (Merriam- Webster). A wave passes through the ocean and moves on, leaving the water as it was before. So, too, the current wave of insanity will pass and the situation will remain as it was before, except that some will have fallen victim to it – those recuperating in the hospital and those whose lives were taken away.Like the flu, each time terrorism breaks out there is a slight variation.This time it’s stabbing. And like always, the ones who will pay the heaviest price are the Palestinians themselves.The current outbreak was sparked by a lie. We haven’t made any changes to procedures on the Temple Mount. Everybody swears by the sacred status quo, but if the status quo allows for incitement to be preached on the site, if it allows for the holy place to be turned into an armory and a base for attacks on Jews, then maybe we should do something to change this insupportable state of affairs. The lie the Palestinians invented may turn out to be a self-fulfilling prophecy.The underlying assumption behind the term “incitement” is that all the terrorists wielding knives, guns and stones are a herd of ignorant morons who don’t know the truth and will “buy” any fantasy aimed at setting them off on a murderous rampage. But the fact is that the desire to kill Jews was there to begin with, and it only takes a little push to give it concrete form.The core problem is the desire, not the push. No matter how invidious the incitement, the primary issue is the fertile ground on which it falls, where it is translated into savage action. In other words, even without incitement, the core problem would still exist.What goes through the mind of the murderers? What do they expect will happen? Are they thinking about 72 virgins? And what about the women who set out to kill Jews? Still 72 virgins? But let’s leave theology aside and focus on what we should do about the situation.The orders governing the use of firearms by police in Jerusalem are ludicrous and irresponsible. They leave them utterly exposed. For instance, if a policeman sees a terrorist holding an unlit firebomb, he is forbidden to fire at him. If the bomb is lit and thrown, but causes no injury, he is forbidden to fire. If a terrorist holding a lit firebomb is 30 yards away, he is forbidden to fire.Is this meant to be a joke? Is this how they expect to deter terrorists and outlaws? Is every policeman supposed to go around with a lawyer and a surveyor by his side? And that’s even without mentioning the orders to “tolerate” more or less anything without responding, including crude sexual profanity aimed at female police officers. If anyone in Tel Aviv dared to act that way he would be carted off to jail and find himself charged with insulting an officer and interfering with the performance of her duties, and would be punished to the full letter of the law. But in our capital city, this behavior must be “tolerated.”There is no respect for the police here, no law and no order. You start by instructing the police to tolerate the supposedly little things like insults, and then order them to ignore rocks and firebombs thrown at police cars, and it doesn’t take long before you wind up where we are now. Zero tolerance is not just a slogan, it’s a way of life.The first thing we have to do is to reestablish respect for the police and the rule of law, to stop “tolerating” and all those other words that are used as euphemisms for turning a blind eye to criminal activities. We have to start acting like a sovereign state.The next stage is to consider the long term. If the chance that an Israeli citizen will be stabbed by a terrorist is significantly greater than the chance of winning the lottery, something is very wrong. Where are we headed? Where do we want to see ourselves 10 or 20 years from now? The prime minister has to lead us there, and it’s not at all certain he knows where he’s going. Living with the Palestinians is, to put it mildly, not great. Wherever we can live apart, we have to separate from them. Jerusalem is the perfect example. What do the villages of Beit Hanina, Shuafat, Isawiya, Jabl Mukaber, Sur Baher and Umm Tuba contribute to Israel in general, and Jerusalem in particular? Their major contribution seems to be terrorists.They should be reclassified as Area B and separated off from Jerusalem.What’s there to understand? The Arab members of Knesset have apparently forgotten that each of them took an oath of allegiance to the State of Israel. They are tarnishing their honor and doing a serious disservice to the Arabs they represent.We can accept demonstrations and demands. That’s normal and reasonable. If you have complaints or demands from the government, go ahead and demonstrate. But then you have to fly the national flag.If you want to fly the Palestinian flag, you’re cordially invited to present your demands to the Palestinian Authority. Israeli citizenship and all the amenities that come with it are a package deal. If the only flags at the demonstrations are Palestinian, not Israeli, then maybe it would be better if they were merely residents of Israel, but citizens of the place they identify with.Translated from the Hebrew by Sara Kitai, skitai@kardis.co.il.