On Dershowitz and Jewish lawyers

In his book, Dershowitz operates under the assumption that Abraham was the first Jewish lawyer because of his advocacy. 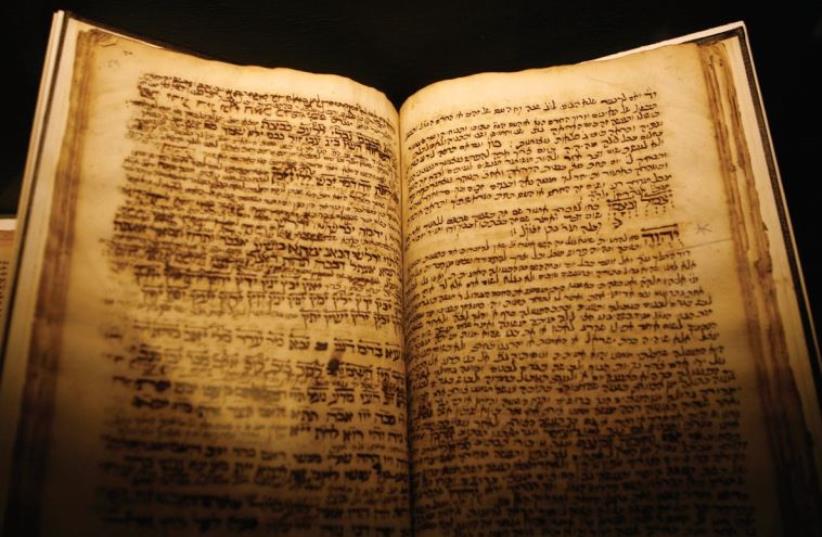 AN ANCIENT Hebrew text is displayed at a museum. Was the patriarch Abraham one of the first Jewish lawyers, wonders the author.
(photo credit: REUTERS)
Advertisement
Are you a Jewish lawyer? Do you know a Jewish lawyer? Jewish lawyers are ubiquitous – the punchline of jokes, the cultural cliche and a classic stereotype. In his new book, The World’s First (But Certainly Not Last) Jewish Lawyer, Harvard professor and litigator Alan Dershowitz infuses this caricature with new creativity and insight. Part biblical exegesis, part historical analysis and always conversationally anecdotal and peppered with jokes, Dershowitz’s book provides a rich and complex discussion of a biblical forefather, Abraham, and how his behavior and actions reveal tendencies as the first zealous Jewish lawyer. After examining Abraham, Dershowitz delves into Jewish history and demonstrates how other Jewish lawyers such as Alfred Dreyfus and Leo Frank followed in Abraham’s footsteps. However, despite this seemingly comprehensive account of Jewish lawyers throughout the ages, Dershowitz’s book is seriously deficient in limiting its discussion to only male Jewish lawyers.In his book, Dershowitz operates under the assumption that Abraham was the first Jewish lawyer because of his advocacy, his negotiation, and his argumentative skills.To Dershowitz, Abraham’s tenacity, passion and stubbornness made him an excellent lawyer. Dershowitz utilizes Abraham’s story to present the composite of the characteristics of Jewish lawyers: radical idol smashers, defendants and defenders on trial, ardent advocates. He claims to define Jewish lawyers in the “broadest and most inclusive terms”. But besides for a few skimpy paragraphs on Justice Ruth Bader Ginsburg, Dershowitz neglects to mention any female lawyers and the role that they played in Judaism.To excuse this, Dershowitz mentions that this profession is one where women were not always warmly welcomed. However, his narrow focus on the American legal industry in the past two centuries is myopic, particularly because the rest of his book is so expansive.Where is Deborah the Judge? Where is Queen Esther? Where are the Jewish women, who interpreted the Jewish law and ardently advocated on behalf of the Jewish nation? Although Deborah the Judge and Queen Esther are only two examples, they are two key figures in Judaism. Both Deborah and Esther possessed the same characteristics that Dershowitz lauds in Abraham – zeal, devotion and a passion for the Judaism.Deborah’s story is described in the Book of Judges. She provided counsel under a palm tree, a symbol of her modesty. She defeated Sisera’s army and rid the Jewish nation of the oppression of the Canaanite king (it is critical to note that another zealous woman, Yael, was essential to defeating the Canaanites and securing Jewish freedom during this period. Yael beheaded Sisera). Besides for being a Jewish leader under whose rule Israel flourished for 40 years, she was an ardent fighter, a sage advice-giver, and therefore a quintessential example of a Jewish lawyer. She did not sit on the sidelines, in the audience, or passively observe, instead Deborah defended and protected Jews and Judaism.While Deborah only receives a chapter within the Book of Judges, Queen Esther has an entire book, and a holiday, celebrating her advocacy. Her story is read each year during Purim. After Haman, with Ahasuerus’s permission, plotted and conspired to execute all the Jews, Esther realizes that she must act in order to save the Jewish nation. She plans two parties. She, as any good trial lawyer would, frames Haman as a vicious and untrustworthy villain to the judge and jury, Ahasuerus.She advocates on behalf of her people. If I am quiet at a time like this, she says, salvation will come from another source. She does not remain quiet, she steps to the podium and defends the Jewish nation. Esther is the prime example of a radical litigator, one who present her client’s story eloquently, ardently and persuasively. She convinces Ahasuerus to re-examine a disastrous decree. Because of her advocacy, the Jews are saved. It is baffling, therefore, that she is excluded from the list of Jewish lawyers.There are other Jewish “lawyers” throughout the ages who have been excluded from Dershowitz’s account: Bruriah, Yehudit and Golda Meir, just to name a few. Particularly because Dershowitz is so expansive and open in his definition of what it means to be a lawyer, how lawyering is so essential to the Jewish religion, and the effect of Jewish advocacy, it is curious to consider why he might have excluded women. The two accounts provided here are biblical ones – accessible and recognizable – so one wonders whether these advocates were omitted because of space constraints or merely because of ignorance. Surely, a good lawyer must always do his or her research before presenting an argument. The subtext of this serious omission is that these advocates are irrelevant, that they do not fit into the character composite. However, the canonization of Deborah the Judge and Queen Esther within Tanach demonstrates their everlasting importance to Judaism and to women who seek strong, passionate role models and advocates committed to Judaism and orthodoxy.The book is an intriguing and often delightful one. But because he neglects to include discussion on Jewish women lawyers in his book, his discussion suffers from a deficiency.The writer works as a special assistant corporation counsel at the NYC Law Department and teaches as an adjunct lecturer at CUNY, where she was the recipient of the Charles Hirsch Faculty & Staff Award in Fiction. Her work has previously appeared in The New York Times.