On my mind: Peace mind-set

Real change will emerge when UN member states stop focusing on the US and Israel as the only ones responsible for solving the conflict. 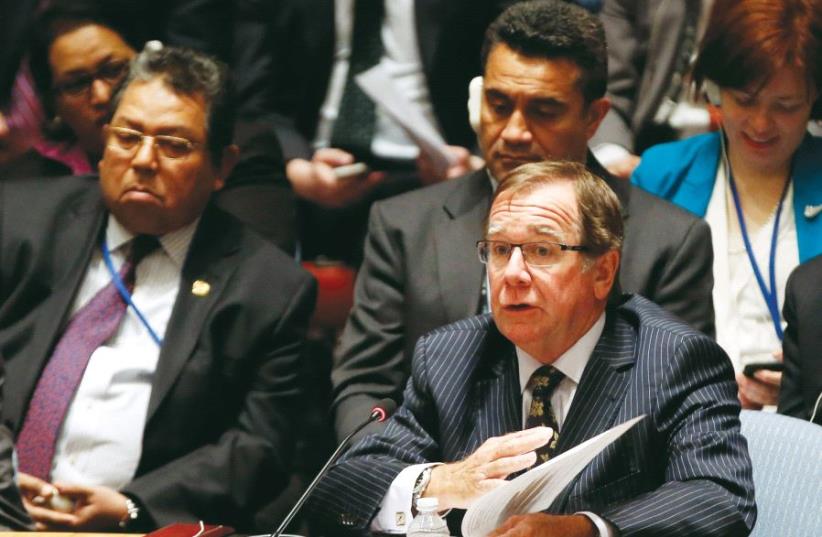 New Zealand's foreign minister Murray McCully addresses a meeting of the United Nations Security Council at UN headquarters in New York in 2015
(photo credit: REUTERS)
Advertisement
Curtailing the pervasive bias against Israel at the UN is a Sisyphean ordeal.The many nations that habitually support resolutions and statements singling out Israel for excoriation don’t worry about any consequences for taking Israel out to the woodshed, since there are none. They keep at it even though their actions do nothing to advance the Israeli-Palestinian peace they claim to seek. Instead, they repeat the mantra that the current situation – the so-called status quo – is not sustainable.Such measures regularly pass overwhelmingly in the UN General Assembly, while in the Security Council only a US veto has historically prevented the passage of one-sided anti-Israel resolutions. Even that safeguard fell in the waning days of the Obama administration, as the US abstained on Resolution 2334, which falsely designated Israeli settlements as the key obstacle to peace, and allowed it to pass 14-0.But things may be about to change.One-third of the countries that voted on Resolution 2334 no longer sit at the horseshoe table in the world body’s New York headquarters. Angola, Malaysia, New Zealand, Spain and Venezuela – half of the Council’s non-permanent members – ended their two-year terms on New Year’s Eve.Pointedly, two of them – New Zealand and Venezuela – joined with Cuba and Senegal in pushing for a vote even after Egypt, the sole Arab member of the Council and the resolution’s original sponsor, had shelved the measure. These four countries were determined to not allow the largest Arab country to obstruct another pile-up on Israel. They eagerly led the frenzy without even a hint of holding the Palestinian leadership accountable for any actions that set back the peace process.Will any of the Council’s five new non-permanent members – Bolivia, Ethiopia, Italy, Kazakhstan, Sweden – be more empathetic to Israel, or even countenance a different approach to the conflict and consider rigorously taking to task the Palestinian leadership as much as they do Israel’s? Don’t count on Bolivia or Sweden.The major new factor, of course, is the new American administration. President Donald Trump and US Ambassador Nikki Haley have vowed to restore the country’s role in defending Israel at the world body. But they need also to explore moving beyond this defensive approach, work to change the mindset at the UN, and begin to build a cadre of reliable countries that will stop treating Israel differently than the other 193 member states. It will be no easy task, but is essential both for the world body and for peace.Ambassador Haley’s honest appraisal of her first Security Council Middle East discussion demonstrated the enormous challenge of changing the mindset. Though there is no shortage of turmoil across the region, the meeting focused on criticizing Israel. “I am new around here,” she said, “but I understand that’s how the Council has operated, month after month, for decades.”As she pointed out, a two-state solution achieved through direct bilateral negotiations is the only realistic resolution to the Israeli-Palestinian conflict.With the bilateral process now stuck due largely to Palestinian refusal to engage Israeli overtures to resume direct talks, perhaps expanding the quest for peace beyond the Palestinians is worth considering, as articulated by President Trump and Prime Minister Benjamin Netanyahu.Successive US presidents have appealed to Arab countries to take concrete confidence- building measures. What is needed now more than ever is at least one Arab head of state who honestly can say that deferring to the Palestinians has not worked, and that both Egyptian president Sadat and Jordanian king Hussein were absolutely right decades ago in negotiating directly with Israel and signing peace treaties for their nations.This kind of dramatic move, seemingly unimaginable, would shake up the current tired approach to peace, galvanize others in the region who truly desire negotiated peace and relations with Israel, and bolster those Israeli leaders who remain committed to the two-state solution.Real change will emerge when UN member states stop focusing on the US and Israel as the only ones responsible for solving the conflict. A new Arab initiative could be incredibly helpful to jump-start the path to peace, to jolt the Palestinians into some responsible action, and to change the mindset at the UN.