On Netanyahu’s historic visit to Australia

Israel’s ever-deepening ties with the world show that it will not sit idle while Palestinian leaders refuse to even recognize a Jewish state. 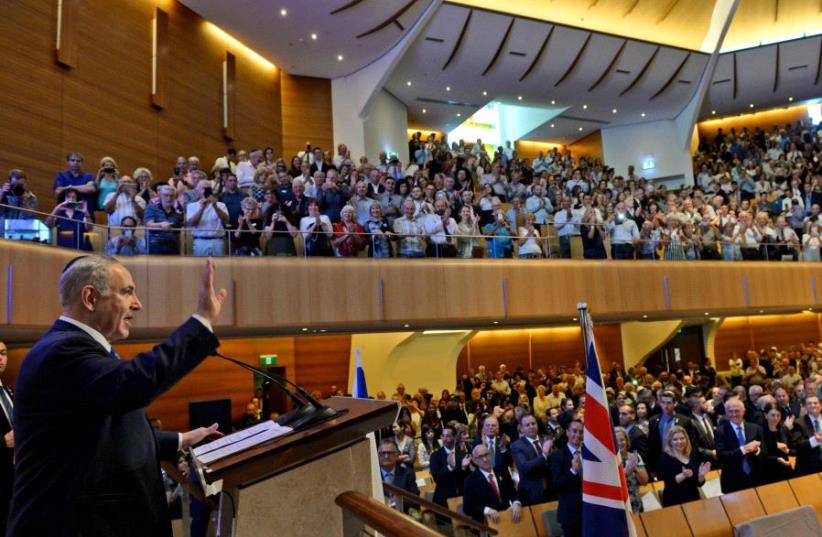 Netanyahu meets Jewish leaders in Australia
(photo credit: CHAIM ZACH / GPO)
Advertisement
Prime Minister Benjamin Netanyahu’s historic visit to Australia, the first by a sitting Israeli prime minister, made a lasting mark on the Australian Jewish community and on the Australia-Israel relationship. On the ground for a mere four days, the Israeli leader leaves a business and political leadership eager to capitalize on Israel’s increasing engagement with the Asia-Pacific region, and a Jewish community further invigorated in its support for Israel.The Australian public learned much of the common bond of nations, of shared values and destinies as liberal democracies and secular states governed by the rule of law. And of Australia’s hand in the formation of the Jewish state in 1948. It was the 4th Australian Light Horse Brigade that captured Beersheba on October 31, 1917, dealing a critical blow to the Ottoman Empire’s hold on the neglected backwater that had become Palestine.Just two days later, the British foreign secretary delivered the famous Balfour Declaration which supported returning Palestine to the Jews, nearly two millennia after the collapse of the last Jewish kingdom there at the hands of Rome.Australian Prime Minister Malcolm Turnbull has accepted an invitation by his Israeli counterpart to attend events in Beersheba later this year marking the centenary of that fateful battle.Australia also played a lead role in establishing support for the creation of a Jewish state at the United Nations. H. V. “Doc” Evatt, a former judge of the Australian High Court and leader of the Australian Labour Party, chaired the United Nations’ ad hoc committee on Palestine that in 1947 recommended partition and two states for two peoples. Australia then cast the first historic vote as the General Assembly ratified the partition plan.The ensuing Israeli declaration of independence was a thing of beauty that saw, for the first time in human history, an exiled, displaced nation return to its ancestral home to exercise national self-determination once more. Meanwhile, the united Arab declaration of war was a tragedy of enormous proportions that unleashed a fresh hell on the Jewish people and their infant state of pioneers and Holocaust survivors. It also precipitated an unceasing state of Palestinian grievance and entitlement, not to mention a refugee problem largely of their own making.The conflict, to be sure, could be solved tomorrow if the mutual political will existed and the Palestinians were prepared to give up on the delusion, nurtured by the Western far Left, that if they “resist” for long enough they will one day have everything “from the river to the sea.”Indeed, the only notable protest against the visit of the Israeli prime minister, held in Sydney the evening after Netanyahu addressed over 2,000 people at Central Synagogue, featured familiar chants to that effect. The event took on a particularly sinister tone as protesters carried banners of two proscribed terrorist organizations, Hezbollah and the Popular Front for the Liberation of Palestine.But the visit of the Israeli prime minister was about the future and much more than the future of the Palestinian conflict. It was about opportunity. Israel is a technological marvel. It has to be. It is bereft of natural resources, is dominated by desert and surrounded by autocrats and populations who pray daily for its destruction. Israel’s advancements in biotech, cyber-security, emergency response, medicine, defense, water, all have the capacity to materially improve the lives of Australians. Israel now does more business with China, Japan and India than with its staunchest ally the United States. In recent years it has turned to Asia and deepened its engagement with Singapore, Vietnam and even Indonesia. Israel has not been sluggish in diversifying to meet the challenges of a changing Europe and an unpredictable United States.The engagement between states need not be on a strictly government-to-government and business-to-business basis. There is an abundance of common experience and much we can learn from each other.There may be no country in the world that places a greater premium on the lives of its soldiers than Israel. We have seen the country trade convicted terrorists of the worst kind for the corpses of its fallen and release 1,027 killers for a single, doomed tank-gunner. The Israeli emphasis on reintegration of returned servicemen and women into society is a model that Australia should follow. Soldiers are given subsidies for education and incentives to purchase homes following their discharge. Combat soldiers are snapped up by start-ups and the high-tech sector that see the appeal and adaptability of fresh minds and eager bodies. There is a reverence of the combat soldier in Israel that does not exist in Australia, to our shame.The visit of Prime Minister Netanyahu and his retinue of business luminaries will elevate the importance of the Israel-Australia relationship across our two societies, energize Australia’s tech and start-up scene, and will deliver tangible benefits for Australia from better securing our troops to better securing our online shopping. Perhaps there will also be an unexpected benefit for the peace process. While the Palestinians invariably use any increase in their diplomatic or political status to promptly harangue Israel in international forums, Israel’s ever-deepening ties with the world show that it will not sit idle while Palestinian leaders refuse to even recognize a Jewish state or negotiate over the terms of their own long-awaited statehood.The author is director of public affairs at the Executive Council of Australian Jewry.