These seminal pictures of Ariel Sharon and his family are published here for the first time.

By GAIL WINSTON
JANUARY 12, 2014 22:25
Ariel Sharon a week after the Yom Kippur War cease-fire.
(photo credit: Emanuel A. Winston)
Advertisement
Manny Winston, my late husband, flew from Chicago to Israel to volunteer during the Yom Kippur War in 1973. He arrived with US secretary of state Henry Kissinger’s first ceasefire on October 21; I followed on October 30th.Manny was picking grapefruit at Kibbutz Dalia when his friend Sol Baskin called with a permit to enter the war zone. They drove to meet Gen. Ariel “Arik” Sharon at the Suez Canal. “Shalom” Baskin was part of the Mahal volunteers from America to the IDF, and the only commissioned officer in Mahal. He was Arik’s commanding officer during the 1948 War of Independence, and they remained friends.Manny brought his two Leica cameras and photographed an outstanding photo exposé on October 29 and 30. He saw and smelled the “killing fields,” the destroyed tanks and the young soldiers who had survived, and he met with Sharon.When I displayed the signed photo of a smiling Arik, someone (who shall remain anonymous) in The Jerusalem Post editor’s office said: “How can he be smiling so broadly after fighting such a filthy war?” I replied: “Well, yeah. It was a filthy war because of what was called “the conceptzia”: that the Arabs wouldn’t dare attack Israel after her fantastic, miraculous win in the Six Day War in 1967. And if we Israelis continue to surrender pieces of our land, given by God, because the Americans continue to threaten us… then we won’t have sovereignty in Israel. Without sovereignty, we won’t have security, freedom or a Jewish and democratic State.” 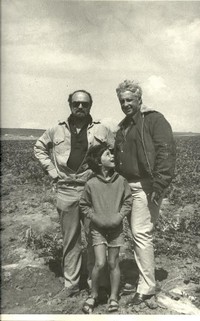 Ariel Sharon.(As an American/Israeli, I reserve the right to mix my pronouns.) Even more damaging, the Americans, president Richard Nixon and secretary Kissinger, forced Israel to forego a preemptive strike when Egypt and Syria were declaring their intentions to annihilate Israel – and when the Americans knew the Arabs were going to attack on Yom Kippur. Israel’s resultant lack of mobilization and thin line of defense on the Suez Canal and the Golan Heights cost thousands of Israeli young soldiers their lives and limbs.So yes, it was a “filthy’ war. But in this seminal photo, taken that October 29, Arik Sharon was truly our great hero. He had come out of retirement to lead the IDF. He was 40 miles from Cairo.The IDF had recaptured all that had been overtaken by the Syrians. He had snatched miraculous victory out of the jaws of devastating defeat. He had encircled the Egyptian Third Army. He was encamped on the Canal.Then, what did America do? Israel was forced to free the Egyptians; accept a less than stellar victory settlement; to withdraw – withdraw! – from key defensive positions won against overwhelming odds, after being attacked by armies from four Arab countries (Jordan, Iraq and Morocco also sent their armies against Israel.) Different books, newspapers and magazines report different versions of the American resupply of armaments. A full list of the various opinions with their attributions goes beyond the scope of this essay. However, as told in one story Manny published: “Within a week, Israel began to run low on all weapons systems and munitions. They pleaded with… Nixon and… Kissinger for urgent resupply, but it was very slow in coming. I recall a report quoting or paraphrasing Henry (Heinrich) Kissinger saying: ‘Let them [the Israelis] bleed a bit’ [presumably because then they would be more willing to surrender their land for peace].“Gen. Alexander Haig, president of Nixon’s chief of staff, began to open munition stores at American bases in the US and in Germany. Out came pallets of artillery shells, TOW (tubelaunched, optically-tracked, wire-guided) missiles and more, which were loaded on Galaxy cargo aircraft. Those Galaxies headed toward Israel.“As I recall, I had just landed at Ben-Gurion Airport at about the time the Galaxies landed and were being unloaded at a fast pace...“John Loftus, author of The Secret War Against The Jews: How Western Espionage Betrayed the Jewish People 1920-1992, was a firsthand eyewitness on October 6 when Haig ordered the Infantry officer training school at Fort Benning, Georgia, to train 40 Israeli commanders to use the TOW system.Then Loftus briefed the Israelis on the TOW capabilities; the ‘kill ratio’ for the TOW was 97 percent.Al Haig stripped every TOW missile on the eastern seaboard of America and from Germany and shipped them to Israel. They loaded every TOW in stock on planes. 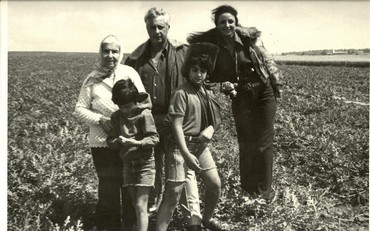 Ariel Sharon and family.“The Israeli commanders were back in Israel by October 14, just in time to repulse a massive Egyptian armored attack in Sinai with the TOWs. It was the turning point of the war. Haig had saved Kissinger’s reputation by giving Israel the TOWs.“Skipping a few things and days, I found myself in the Sinai Desert, meeting with then-Gen. Ariel Sharon in what he called ‘the killing fields.’ Burned tanks and army trucks dotted the landscape as if they were placed neatly on a giant chess board – with bodies scattered in the sand. Once you smell a dead body, cooking in the sun, you never forget it.“If not for Gen. Haig’s resupply of weapons and Israel’s extraordinarily brave fighters, that scene could have been repeated all the way to Tel Aviv.”NOW, BACK to today’s photo story: Just envision how the blown tank turret, upside down, destroyed the lives of those brave souls inside. Manny did see these effects and, because he was a true Renaissance man, a graphic thinker who was a painter, sculptor and political analyst, envisioned a solution to the weak point of the tank. He described a technique to conquer that weakness to Sharon, who sent him to Maj.-Gen. Israel Tal, the developer of the famed Merkava tank.Manny’s “leap of imagination” created what became “Blazer” or “Reactive” Armor. He designed rectangles of hollow metal boxes to be placed around the neck of the tank turret so that when hit, the explosive charge therein would push the incoming ballistic missile out, thereby saving the tank and its crew. This was compatible with the primary goal of Gen. Tal’s Merkava tanks: defense of crew.That, along with speed, maneuverability, effective shooting and protection against damaging desert sand, were what made the Merkava “the tank a Jewish mother would love,” as Manny called it.He also designed a better bridge for crossing the canal – easier to carry and assemble, and less susceptible to the huge holes the tanks had already created on the day’s existing bridge.Manny continued to submit creative concepts for defense and offense to Israel’s military industries – for which he received his Israeli citizenship and security clearance. Many of his concepts and ideas were adopted throughout the years. He never asked for credit or remuneration but even today, I see his concepts being used, either in action or in military articles. Someday I hope to publish the “Winston Defense Designs,” either online or in a book – a very big book, with his original drawings.THE YOM KIPPUR WAR was a seminal turning point in Israel’s history. We did win. It was a miracle, given the forces mounted against us, in number and backed up the Soviet Union.We have 40 mounted color photographs by Emanuel A. Winston, ready to show at a traveling or permanent exhibition, which will enhance our appreciation of what our men and generals went through and achieved.The Yom Kippur War was also a seminal turning point in the lives of the Winston family. It was our second trip to Israel; we had tried to make aliya in 1962 but didn’t succeed. I made aliya on November 7, 1979. Manny died on June 12, 2012, and is now buried on the Mount of Olives.I sold the home he built in Highland Park, Illinois, in August 2012, and brought most of our books, along with his paintings, manuscripts and published papers, to the home I built in Israel in 1992. Two of our sons and their families also live in the Jewish state.My heartfelt message for this year is to invite all my friends, family and Internet friends to come to Israel. This is where a Jew can be truly Jewish.

The writer is the wife of the late Emanuel A. Winston, who covered the Sinai campaign as a photographer/ writer; she plans to make most of his published articles available on WinstonIsraelInsight.com. She is also the founder of the Mideast Information Resource (MEIR).