We cannot allow ourselves to have the situation in which tens of thousands of people live here without a clear solution, without health, without welfare, without work. 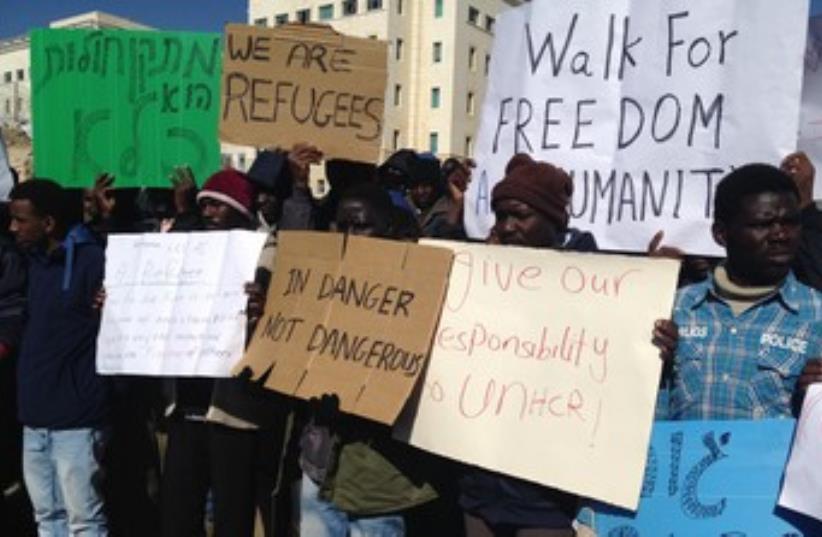 Migrants protest Jerusalem 370
(photo credit: Benjamin Rosen)
Advertisement
The Knesset approved a law that is supposed to solve the problem of the “infiltrators” and the distress that this causes to the residents of south Tel Aviv. This is a lie, of course. This is a shameful law that was passed in contradiction to the opinion of the legal counsel to the Knesset. See you in court! It’s too late to convince the members of Knesset to vote against this humiliating law, but you can at least understand what the Knesset approved this week. Here is a list of the lies that the State of Israel is telling us about asylum-seekers, the situation in south Tel Aviv, life in Eritrea, and the law that was passed two days ago, in opposition to the opinion of the legal counsel of the Knesset.Lie number one: This law will solve the distress in south Tel Aviv.It is very easy to disprove this lie. It has nothing to do with human rights – it’s just a matter of math.Today, around 53,000 asylum seekers live in Israel.In the “open” prison that the state is establishing, there are 3,300 places. Let’s assume that Saharonim is also at full capacity – another almost 2,000 places.We are left with 47,700 asylum seekers in South Tel Aviv. For this we have a budget of at least half a billion shekels? For this, the trampling of human rights, disgrace of the court, a mockery of the mechanisms of the Knesset and all of the international protocols? So in South Tel Aviv there are 47,700 unemployed people, without access to healthcare, lacking protection from the welfare services, instead of 53,000. This is the solution? Lie number two: The State of Israel is going to transfer all of the asylum seekers in Israel to a third country. We have almost managed to forget already, but it wasn’t so long ago, in fact last August, that Interior Minister Gideon Sa’ar declared that Israel had signed an agreement with a third-party country, to which tens of thousands of asylum seekers in Israel would be transferred. When would it happen? “After the holidays.”Well, the holidays that I know of have already passed, and it is clear that there is no agreement, and no third country, and besides blatantly lying to the public, there is nothing here.

Lie number three: They aren’t refugees, they are migrant workers. Today in Israel there are 35,987 asylum seekers from Eritrea – a vast majority of the asylum seekers in Israel. Only here, out of all of the developed countries in the world, a majority of them were not allowed to submit requests for asylum, and those that were submitted were not checked. For the sake of comparison, in 2012 around the world 26,000 asylum-requests were checked for Eritrean asylum-seekers – 20,000 of them were recognized as refugees. An additional 1,500 received alternative protection.What does that mean? It means that apparently almost 34,000 of the people living here in Israel are refugees, and if they would check their asylum requests, they would also be recognized as such.Lie number four: If we don’t lock them up, they will continue to come.The government likes to scare us by saying that without the new law, a huge flood of asylum seekers will come to Israel. They say that we have to imprison innocent people without trial for an indefinite amount of time in order to create a “deterrent.” This is another blatant lie. According to the immigration authorities: In 2010, 14,715 asylum seekers entered Israel through the Egyptian border. In 2011, 17,298 entered. In 2012, 10,440 entered. And in 2013, only 40 entered Israel.Why? Because the fence on the Egyptian border was completed. The stream has stopped. In the last months of 2013 only four asylum seekers entered Israel. So who exactly is this law trying to deter?Lie number five: It isn’t a prison, it’s an “open center.” An “open center” in the middle of the desert, on the grounds of an IDF firing zone, in which it is forbidden to work, which is run by prison guards, with a head count three times a day, with a miniscule living allowance, with a terrifying barbed-wire fence – this isn’t a “center” or a “facility.”This is a prison.Lie number six: This law solves the problems for which the Supreme Court struck down the first “infiltrators” law.“It is not enough to call a facility ‘open’ in order for it to withstand the test of constitutionality” – this isn’t my statement, and also not one of human rights organizations’, but rather that of the legal counsel to the Knesset. MK Miri Regev shouted at the lawyers after the former “infiltrators” law was struck down: Why didn’t you warn us that this law is unconstitutional and won’t withstand the testing of the Supreme Court? This time she won’t be able to say that – the writing is on the wall, and it’s clear.And the last lie: There is no other option.I am asked a lot what the alternative is. So, yes, there is an alternative. There are whole branches of the Israeli industry that under heavy stress of lack of workers – areas in which Israelis are not willing to work, and for which Israel imports thousands of foreign workers every year. In the cleaning industry, in agriculture, in restaurants, in hotels and in construction – there is an urgent need for 56,400 workers.If the state really wanted to get the asylum seekers out of Tel Aviv, it would spend the millions that it’s wasting on the new prison on the training of asylum seekers that live here, who escaped from danger in their country, so that they will be able to work here and live with dignity.The people who are working in agriculture don’t live in Tel Aviv – they are spread throughout the country. They don’t sleep in Lewinsky Park – they have money for a roof over their head. They don’t sink to crime – because they don’t need it. With this, not only is the problem of asylum seekers solved – but also the lack of working hands in the market.We cannot allow ourselves to have the situation in which tens of thousands of people live here without a clear solution, without health, without welfare, without work. It is a great danger to them and a great danger to us as a society. The government, to my dismay, refuses to deal with the situation.In a few months, Miri Regev and Gideon Sa’ar will have to stand in front of the inhabitants of south Tel Aviv and of all of Israel, and explain to them why nothing has changed.This article is based on a speech the author, a Meretz MK who chairs the Knesset Committee on Foreign Workers, gave to the Knesset.
Advertisement
Subscribe for our daily newsletter