Our women across the sea

We must remember this: achievements for the status of women are not always realized directly but also by the acquisition of key positions of influence in other important battles. 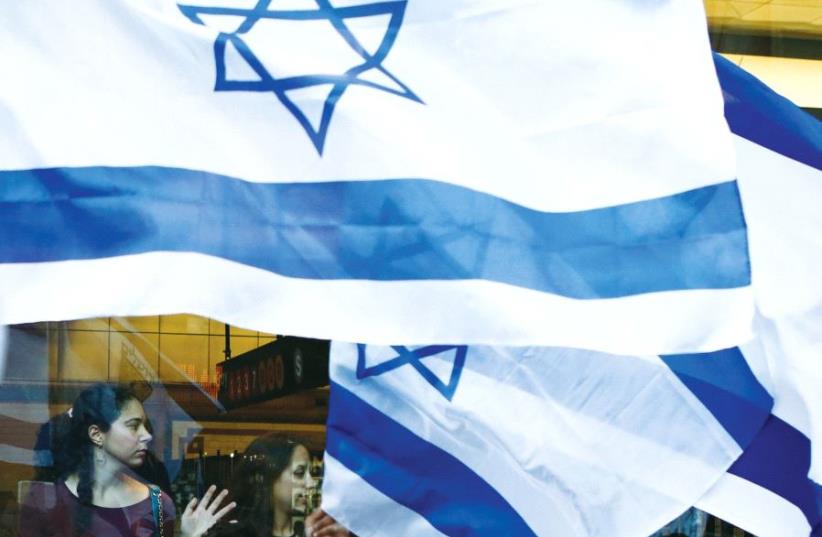 Women watch pro-Israel supporters wave Israeli flags and rally at Times Square in New York, to show support during Operation Protective Edge, summer 2014
(photo credit: REUTERS)
Advertisement
On International Women’s Day, it is customary to celebrate the status of women, mark past achievements, set new goals, refresh old messages and voice a clear, global feminist statement that listeners understand will not disappear any time soon.This time, I would like to depart somewhat from tradition and tell the story of thousands of women from abroad who volunteer with great devotion for the State of Israel, each in her own way.These women do what women have been known to do in every generation – achieve any goal – while remembering that the vision is greater than any one individual. They work from an inner calling, without a desire for power or publicity, without asking for displays of respect, without effort being translated into any reimbursement other than a salary of satisfaction. This is women’s achievement as it should be. To succeed in this millennium, our nation will need its women recruited on its behalf – not from a position of weakness or as a supplemental force for menial jobs, but as leaders, innovators and directors in their fields. Without these women, a countless number of social projects, public institutions and social frameworks would exist only in dreams.Even less known is their diplomatic work. Their constant presence on behalf of Israel at the institutions of the United Nations represents a vital part of the State of Israel’s foreign diplomatic activity. They are active in Vienna, Geneva and New York, present at meetings of the Human Rights Council, the United Nations Relief and Works Agency and the World Health Organization.Their voices are heard at the various UN councils dealing with atomic energy, drugs, crime and development. They organize events, hold exhibitions (at this moment, at the UN building in Vienna, there is an exhibition of paintings by Israeli women that represents the diversity of Israeli society), deliver speeches, explain, ask questions, answer questions and partake in all relevant activities – to represent Israel in a fair and decent light to an organization that is in its nature anti-Israeli.Even terrible decisions reached by branches of this organization do not dissuade them; when the WHO contemplates new ways to denounce and demonize Israel, the women are there to highlight the quality of Israel’s emergency medicine, which is frequently extended as humanitarian aid around the world. Not only at the UN, but also in their various communities across the globe, these ladies will patiently explain the facts in the local languages, fluently and profoundly defending Israel’s position, and will respond to the incessant propaganda against it.On International Women’s Day, everyone talks about women’s status around the world and achievements of the struggle to improve it. But we must remember this: achievements for the status of women are not always realized directly but also by the acquisition of key positions of influence in other important battles.If today Israel’s various social struggles are led by women, it is not because of their noble legal status or because “women deserve it too,” but because of their proven ability to achieve, their innovation and willingness to take responsibility and yes, also because of the help of women from abroad. ■ The writer is the chairperson of the Women’s International Zionist Organization (WIZO).