Quebec City: The mosque murders that have shocked the world

Police arrested one man at the scene and a second a short while later. In his car they found an AK-47 assault rifle. 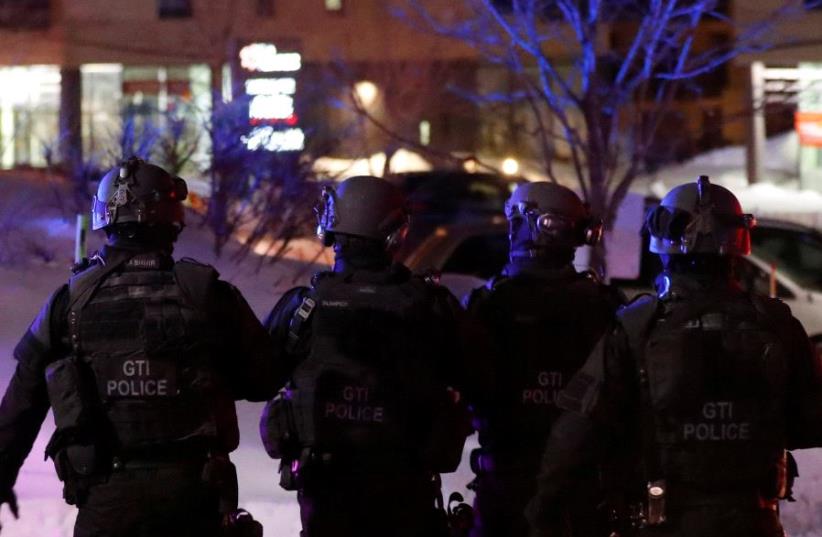 Swat team police officer walk aournd a mosque after a shooting in Quebec City, January 29, 2017.
(photo credit: REUTERS)
Advertisement
On Sunday night, in Quebec City, renowned for breathtaking vistas and a charming Old City, six men were murdered while praying in a mosque.In a telephone conversation on Monday, a prominent community leader in Canada remarked: “We, in Canada, have become so complacent. We think that this can’t happen here. That somehow we are insulated.We have to speak out and condemn this violence.”At that time, we knew little: Two masked men, it was being reported, had entered a mosque in Quebec City, shouting “Allahu Akbar” and shooting at men praying on the main floor. Women and children were in an area upstairs.Police arrested one man at the scene and a second a short while later. In his car they found an AK-47 assault rifle.Throughout the day on Monday, information from authorities was scarce.Rumors swirled. Some assumed it was Muslim sectarian violence. Others were sure that it was a hate crime.Terrorism. The truth is, in the information void, speculation was rampant and people tended to validate their own biases.We now know that only one suspect was charged on Monday with six counts of murder, but not terrorism, a specific crime in the Criminal Code of Canada.The second individual, police are now saying, is a witness.The accused, Alexandre Bissonnette, is a 27-year-old Quebec City resident and political science student at Laval University. Acquaintances describe him as an introvert who enjoys chess and birding and, along with his identical twin brother, was bullied in high school.According to a Quebec City organization that assists refugees, Bissonnette had an online presence and was known for being “pro LePen and anti-feminist.”Among those he is accused of having murdered were a shopkeeper admired for helping new arrivals in the local community and a university professor from Tunis who immigrated to Canada in 2011 with his young family.THIS INCIDENT has, for the moment, captured global attention; partly because it happened in Canada, considered a tranquil idyll; partly because defenseless men were mowed down in a house of worship as their wives and children watched; and partly because it transpired in the immediate aftermath of a rather raucous few days in America, and globally.I refer latterly, of course, to the surreal backdrop of this tragedy: the fallout from President Donald Trump’s executive order last Friday prohibiting individuals from eight Muslim-majority countries from entering the United States.On Saturday, clearly responding to the ensuing chaos and confusion, Canadian prime minister Justin Trudeau tweeted: “To those fleeing persecution, terror & war, Canadians will welcome you, regardless of your faith. Diversity is our strength #WelcomeToCanada.”This set off a flurry of comment in the media and elsewhere as to whether Canada’s position would antagonize President Trump. As one radio interviewer in Israel asked me: “Was this done to express opposition to Trump or support for refugees?” Unhesitatingly, I answered: “To support refugees.Absolutely.”My response was reflexive and based on nothing more than conjecture and my familiarity with the Canadian mindset.We are a nation of immigrants and refugees, built on the foundations of the French-English patriarchy.In the 60s, Canada was very much a white, Christian country. Waves of immigration have since transformed the population into one of the most multicultural in the world. Most Canadians, myself included, are the descendants of newcomers, many of them refugees with gut-wrenching stories.In the past, diversity was not celebrated in Canada.It was tolerated, because the young, huge, sparsely populated country needed people. Immigrants have assimilated and prospered through tenacity and hard work and, in the process, transformed the society into a more tolerant population.And, as in every country, there is hatred and prejudice, and we have our share of senseless acts of violence.Since Sunday night, Canadians have voiced and demonstrated shock, sympathy and steadfast support of the Muslim community. Leaders of the major federal political parties traveled to Quebec City to attend a vigil, in a very eloquent expression of solidarity.It is also apt, at a time like this, to acknowledge that since the Yom Kippur War, most synagogues in Canada have operated on High Holidays and other peak periods with guards. As, since 9/11, have many Jewish community centers and some Jewish day schools.Until now, I am unaware of other religious groups requiring such protection in Canada.When I dropped my young children at school, or took them for a swim at the JCC, I had to explain why they needed security. In Toronto. A city which is home to 250,000 Jews.And now this.The world is not what we will it to be and Canada must come to terms with the reality that evil and hatred lurk everywhere. So far, I think, we have been very lucky.The author, the former Canadian ambassador to Israel (2014-16), resides in Tel Aviv.