Rouhani chuckled when confronted by reporters about the “cloaks” placed on the statues. 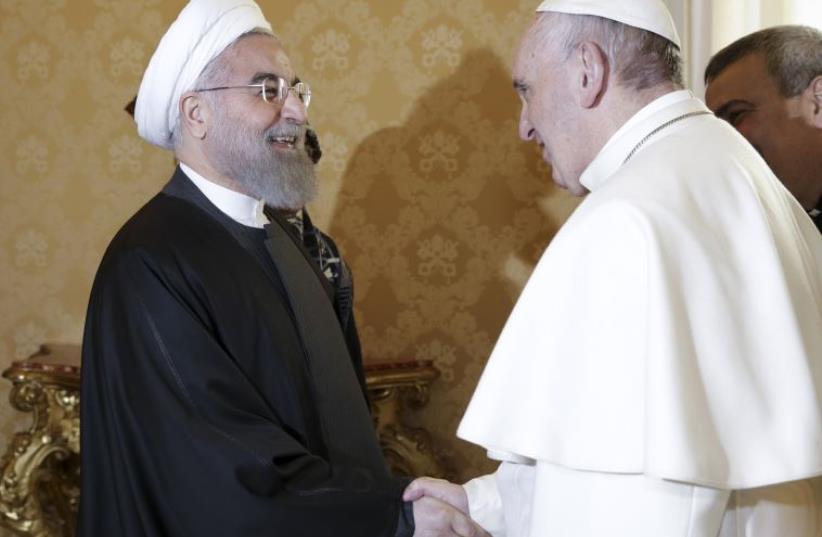 Iran's President Hassan Rouhani (L) is welcomed by Pope Francis at the Vatican January 26, 2016
(photo credit: REUTERS)
Advertisement
Italian officials declined to comment after being ridiculed this week for “clothing” ancient nude statues in Rome’s Capitoline Museums, so as not to offend the sensibilities of a visiting foreign dignitary.The delicate world leader in question was Iranian President Hassan Rouhani, who took a four-day trip to Italy and France to seal some business deals in the wake of the lifting of nuclear sanctions.But being shielded from naked marble wasn’t the funniest, or even most pathetic, part of Rouhani’s trip to the City of Seven Hills. Far worse was his reception at the Vatican, where Pope Francis fawned all over the puppet head of the Ayatollah Ali Khamenei-led regime, directly and indirectly responsible for the slaughter of Christians across the world.The father of the Catholic Church nevertheless greeted “His Excellency Hassan Rouhani, president of the Islamic Republic of Iran” as though he were a fellow pacifist, ready, willing and able not only to spread a global message of brotherly love, but to carry it out.According to a statement from the Vatican after the meeting, the two held “cordial discussions” in which “common spiritual values emerged.”The talks concluded with the “important role that Iran is called upon to fulfill, along with other countries in the region, to promote suitable political solutions to the problems afflicting the Middle East, to counter the spread of terrorism and arms trafficking. In this respect, the parties highlighted the importance of interreligious dialogue and the responsibility of religious communities in promoting reconciliation, tolerance and peace.”It is not clear whether the pope is delusional or an idiot.Either way, his moral authority – already shaky where asserting the evils of radical Islam is concerned – ought to be completely nullified. To view Rouhani as someone with shared values who will act to combat terrorism and arms trafficking is to make a mockery of goodness.It is one thing to have supported the nuclear deal, as the pope did; this simply puts him in good international company.It is quite another, however, to consider it a kind of miraculous, transformative cure for the ills of a regime that oppresses its own people and equips others with the money, tools and training to commit mass murder on its behalf.Indeed, while Francis and Hassan were chumming it up on Tuesday, Iranian generals and admirals continued to boast about the progress they have been making in nuclear activities as a result of their deal with the West, while conducting drills to test long-range missiles and sophisticated radar systems.On Wednesday, International Holocaust Remembrance Day, Rouhani’s master, Khamenei, aired a video he produced denying the Holocaust and attacking America and Europe.The video, called “Are the Dark Ages Over,” shows pictures of wounded and dead Palestinians with narration (ostensibly by Khamenei himself) that includes such gems as: “It is Western powers headed by America that are [behind Israel’s perpetration of the bloodshed]. This is while they say in their slogans that they are opposed to terrorism.”This is not new. Khamenei has long been as much of a Holocaust denier as a hater of the West, particularly the United States. He also openly accuses the US and Israel of having created the Islamic State (IS) – the Sunni organization that challenges his rule over the Caliphate they both want to impose on the world.About this – and the Holocaust- denial cartoon contest that is to take place in Tehran in June – the pope had nothing to say. Nor did anyone mention the fact that the winner of this competition will be awarded $50,000. That’s a lot of cash in a place like Iran, where the populace is in dire straits.You know, due to the fact that all of the country’s intellectual and other capital is invested in building precise weapons of mass destruction.At the end of their warm encounter, before Rouhani asked the pope to pray for him, the two exchanged gifts. Rouhani gave the pope a Persian rug and a book of Iranian art; the pope gave Rouhani a medal showing St. Martin offering his cloak to a shivering man, signifying brotherhood.Rouhani chuckled when confronted by reporters about the “cloaks” placed on the statues.But we know what the true source of his amusement was – his having managed to pull the wool over the pontiff’s eyes.The writer is the web editor of The Algemeiner (algemeiner.com) and a columnist at Israel Hayom.