Russia: A partner for an Israel with fewer friends

Israel’s approaches to its American ally and a Russia that directly and indirectly assists enemies like Iran, Syria and Hezbollah appear misplaced. 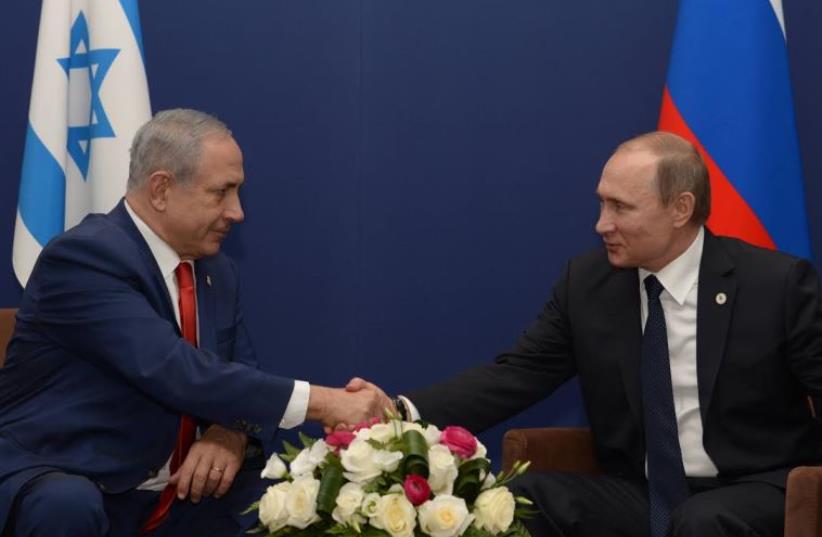 Benjamin Netanyahu and Vladimir Putin.
(photo credit: GPO)
Advertisement
In June, Prime Minister Benjamin Netanyahu visited Russia to celebrate 25 years of full diplomatic ties between Moscow and Jerusalem. The trip also marks the fourth meeting between Netanyahu and Russian President Vladimir Putin since September 2015. Netanyahu met US President Barack Obama just twice during the same period.Israel’s approaches to its American ally and a Russia that directly and indirectly assists enemies like Iran, Syria and Hezbollah appear misplaced. However, Israel’s actions are backed by intent. Indeed, Russia and an increasingly right-wing Israeli government may be well matched.Israel’s leadership displays little reluctance clashing with allies in Washington and Europe while accommodating and even embracing Russia. To some extent, this is simple pragmatism: Jerusalem cannot confront Russia militarily and the Kremlin may yet contain its hostile partners in Syria. Still, Israeli officials often withhold complaints even when Moscow oversteps. Deputy defense minister Amos Gilad stopped just short of boasting when he announced that the Israel Air Force did not fire on Russian military aircraft that violated Israel’s airspace in November. This is the same IAF that once downed Soviet fighter jets over the Suez Canal.Syria is not the first arena in which Israel has acceded to Russian positions. Jerusalem terminated arms deals with Georgia and Ukraine during their respective conflicts with Moscow. Israel and Russia jointly develop defense technology, much to the chagrin of the US, Europe and some erstwhile Soviet republics. Israel skipped a United Nations vote on Ukraine’s territorial integrity, departing from the Western consensus on Crimea.Israeli diplomats were striking during the March 2014 vote but a Foreign Ministry statement from earlier that month tells all: Jerusalem viewed the Russian land grab with “grave concern,” but nothing more.Some present Israel’s collaboration with Russia as a means to keep Moscow from supplying weapons to Jerusalem’s regional rivals. Israeli officials surely know better: Russian- built weapons still enter the arsenals of Iran, Syria and Hezbollah. Whether born of genuine hostility toward Israel or dispassionate opportunism (the latter is far more likely), this negates the Kremlin’s ability to be a “friend” of Israel in the way Washington presently is. Ultimately, Russia has neither the capacity nor the desire to replace the US as Israel’s ally. In many ways, Europe also remains more significant to Israel than Russia.EU members still purchase more than 10 times more Israeli exports than Russia.Nevertheless, Israel’s present course vis-à-vis the Palestinians risks alienating Jerusalem’s Western patrons. In practice, Washington and Brussels are far less tolerant of Israel’s rightward direction on settlements and the two-state solution.Meanwhile, many of Russia’s greatest champions in Israel are right-wing Russophone interest parties. Natan Sharansky’s Yisrael Be’aliyah eventually merged with Likud, while newly appointed Defense Minister Avigdor Liberman of Yisrael Beytenu previously criticized Prime Minister Netanyahu for not being hawkish enough. It may be no coincidence that Soviet-born Lieberman, a personal friend of Putin, managed Israel’s Russia-friendly Ukraine policy as foreign minister.Russia matches Jerusalem’s approach to Ukraine with equivalent indifference to Israel’s own disputes in the occupied territories.Officially, Russia, the US and EU share similar platforms regarding the Palestinian question.The Kremlin supports a two-state solution, opposes permanent occupation of the West Bank and decries the establishment and expansion of Jewish settlements there. However, commonalities between Russian, American and European policy end at rhetoric.Russia avoids launching its own largescale Israeli-Palestinian diplomatic projects, instead latching onto programs created by others. Russia makes appearances at international conventions consistent with a desire for prestige but insufficient to make a tangible impact on the political process. Moscow failed to dispatch Foreign Minister Sergei Lavrov to the June Paris conference, sending a lower ranking official, Mikhail Bogdanov, instead.There, Bogdanov stated that “any externally imposed solutions will likely fail.” Here, Moscow publicly acknowledged its disinterest in placing separate pressure on Jerusalem. No doubt Israeli officials were listening.Russia’s estrangement from the West makes it ever more attractive for Israel. Denied certain food imports from Europe, Russia turned to Israeli alternatives, including exports from Jordan Valley settlements. In November 2015 Israel severed political contacts with the EU over the bloc’s product labeling scheme for settlement exports (a policy the US quietly supported). That month, the Russian-led Eurasian Economic Union invited Jerusalem to begin talks on a free trade zone. Later that year, the Kremlin banned Turkish agricultural products following Turkey’s shootdown of a Sukhoi Su-35 near the Syrian border. Russian Agriculture Minister Alexander Tkachev cited Israeli imports as a possible substitute. If Moscow ever intended to sanction settlement exports, closing off Turkey (previously the source of 20% of Russian vegetable imports) surely made Russia a less conscious customer.During Israel’s formative years, the country pursued sponsorship from France and later, the United States. Some leaders always treated reliance on a single superpower ally as an obstacle to Jerusalem’s freedom of movement.While Israel still depends on Washington for a great deal, its indigenous arms industry and stable economy make greater self-sufficiency possible, if only for a time. Russia is also not the only non-Western country Israel is courting.Israel trumpets broader relationships with India, China and newly independent states in the former USSR like Azerbaijan, Kazakhstan and Uzbekistan. Behind this successful diplomatic outreach, Israel may be preparing for a day in the distant future when EU (and even US) policy reaches beyond differentiating labels for products made east of the Green Line.Russia and Israel’s other newfound associates share largely the same policy on the Palestinian conflict: verbal opposition to Israeli policy, matched by practical inaction. These are not allies that will speak of shared values and democracy, but partners for an Israel with few true friends.