This was the first time in American history that a Jew won a presidential primary – and America hardly noticed. 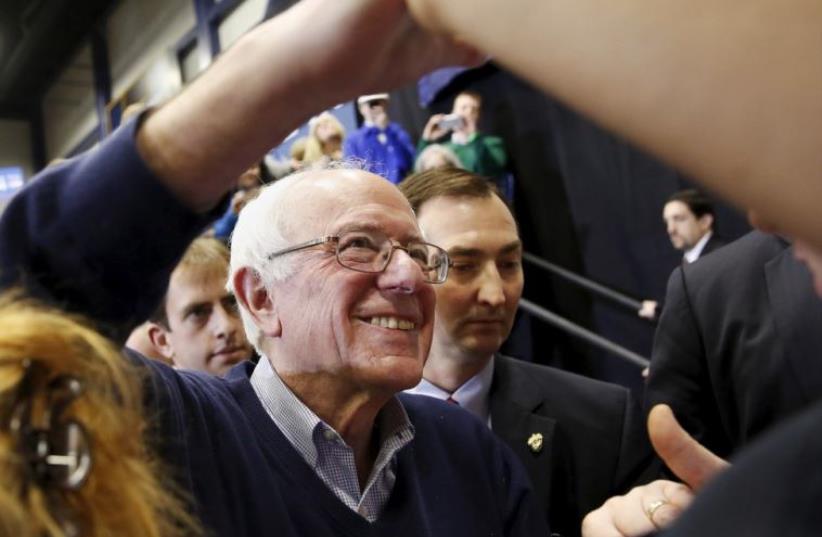 Democratic US presidential candidate Bernie Sanders shakes hands with supporters during a rally in New Hampshire
(photo credit: REUTERS)
Advertisement
There are many unique aspects to Tuesday’s US presidential primary election in New Hampshire. The wins by two wild cards – Republican Donald Trump and Democrat Bernie Sanders – show that dissatisfaction with the mainstream political apparatus is deeper and more visceral than previously believed.The results also prove that both Trump and Sanders have a fighting chance of taking their respective parties’ candidacies.Just weeks ago pundits and experts thought the two lacked electability.The New Hampshire results are also a harbinger of an exciting US presidential election with lots of twists and turns.But there was another aspect of the ballot that was unique and special: This was the first time in American history that a Jew won a presidential primary – and America hardly noticed.David Harris, chief executive of the American Jewish Committee, told The New York Times that the muted reaction to Sanders’s success reflected, in part, the growing acceptance and presence of Jews in American political life.Jewish participation at the highest levels of American government is now quite normal, Harris pointed out.The situation was different as recently as 1996, when Jewish Republican senator Arlen Specter ran for the presidency, or in 2004, when Jewish Democratic senator Joseph Lieberman did.But today, said Harris, “my children are walking around saying, ‘What’s the big deal?’” Another reason why Sanders’s Jewishness has not become an issue is because he hasn’t made it one. Like Ted Cruz, who has hardly mentioned his Latino background and unlike Hillary Clinton, who has gone out of her way to emphasize her femininity, Sanders has not emphasized his Jewish background. In his victory speech, Sanders referred to himself as a “son of a Polish immigrant who came to this country speaking no English and having no money.”Sanders’s outlook is universalistic. For him, what was exciting about his win was not that a Jew took the primary in New Hampshire, but that someone from the humblest of beginnings like himself could be a contender for the US presidency. Sanders, like US President Barack Obama, was marveling at the unparalleled liberties and freedoms afforded citizens of the US regardless of their race or background. America is one of the few countries on Earth today that a Jew can be a realistic candidate for leadership without that Jewishness becoming an issue – unless of course the candidate chooses to make an issue of it.This is where Sanders’s Jewishness dovetails with America’s liberal ideals. Like many young Jews in the early 1960s, Sanders was active in the civil rights movement; he embraced socialism as a means of building a more egalitarian and freer society. What has made him popular among the anti-establishment folks is his ability to run a campaign without taking money from big business interests.One of the few instances in which Sanders did mention his Jewishness was to emphasize the universal lesson to be learned from it. During a campaign rally, a hijab-wearing woman stood up and said she was worried about anti-Muslim rhetoric in American politics.Sanders called her over for a hug and said, “I’m Jewish.My father’s family died in concentration camps. I will do everything that I can to rid this country of the ugly stain of racism.”Sanders might not be Jewish in the conventional sense.He is not married to a Jewish woman; he is not affiliated to a Jewish community; he’s not even very religious.But in a deeper sense, Sanders is Jewish because he has learned from the experiences of the Jewish people. From the story of Exodus to the Holocaust the Jews have internalized the importance of the most basic moral imperative in the Bible, “do onto others what you would have them do unto you.”Having experience discrimination, oppression – even genocide, the Jews have the propensity to become hypersensitive to the suffering of others – if they choose to.Sanders’s type of Jewishness has relevance for Israel as well. Imagine an Israeli society that has managed to overcome the animosity and tension between Arab and Jew to the point where an Israeli Arab could have a shot at becoming prime minister of the Jewish state? Vladimir Jabotinsky, one of the founding fathers of Zionism envisioned such a Jewish state. Perhaps one day it will become a reality.