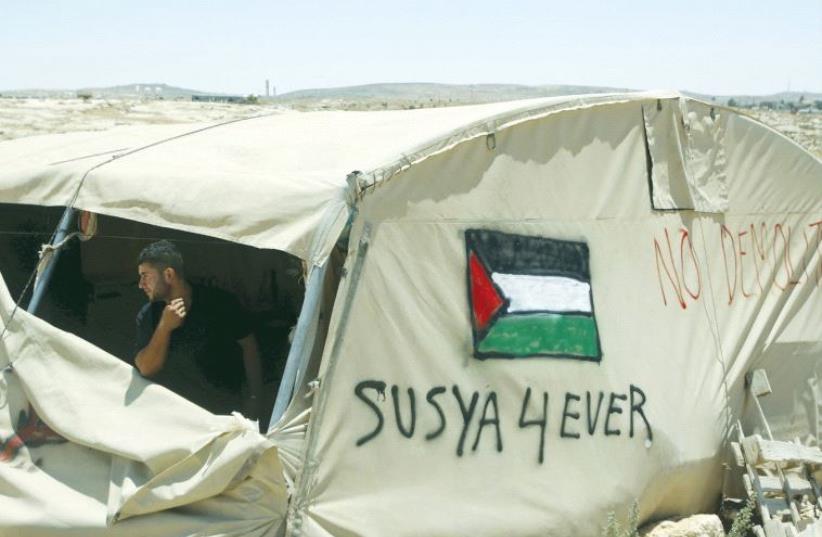 A PALESTINIAN man looks out from his tent in Susiya village near Hebron in July of 2015.
(photo credit: REUTERS)
Advertisement
The “global Shabbat against demolitions” this past weekend gathered around 300 Jews from some five countries to stand in solidarity with the Palestinian village of Sussiya. They claimed that “As Jews, we say emphatically that forced displacement, dislocation and demolition do not represent our values.” However, the fact is that these so-called “activists” are simply expressing anti-Israel bias by supporting thieves and squatters who have illegally settled on swaths of state land.Take the case of the town of Susiya, which has recently been making its way to the top of the news cycle around the globe. Susiya is a small, ancient and historical Jewish community in the Southern Hebron Hills. But the interest isn’t actually on Jewish Susiya, a thriving Jewish town today which archeological evidence indicates was originally a Jewish village established around 1,500 years ago. Instead the attention is being given to what some call “Arab Susiya,” an illegal encampment built on state land adjacent to the Jewish historical site.The reason for the fuss is that following years of back-and-forth court hearings, with the High Court issuing an order calling to knock down the illegal structures on the site, the Civil Administration might finally carry out its duty. All that remains is the approval of Defense Minister Avigdor Liberman, who was asked to issue a ruling around August 15 in response to a petition drafted by Regavim to implement the demolition.Regavim has been monitoring the illegal building and expansion on state land taking place at Susiya over the past several years and per the organization’s mandate is insisting the Civil Administration uphold the law and remove the squatters from land that is not theirs. While Regavim stands nearly on its own defending Israel’s state land, around 50 other NGOs have come forward to defend the land thieves.These anti-Israel NGOs both here and abroad are appealing to foreign entities including the US State Department to pressure Minister Liberman not to carry out the demolition of “Arab Susiya.” These groups claim that the encampment is an ancient historical Palestinian village. To put it bluntly, that is a complete fabrication.Surveys of villages and populations conducted by the British Mandatory powers in 1945, which mention all of the villages in the area and even some of the inhabitants, prove there is no hint of the existence of an Arab village named Susiya. More recently aerial photos obtained by Regavim from 1999 show nothing resembling a village in that area. An identical photo from 2013 shows how squatters have infiltrated the locale.Regavim research also shows that this clan of bandits is mainly from the Nawajah family who reside in the nearby town of Yatta. In 1986, using the ruse of being harmless shepherds in search of grazing land, members of the clan settled at the archeological site itself, but were evicted by the IDF. It was at that point that they moved to their current location. The Nawajah family has tried to take permanent control of the area ever since, in complete violation of the law.So while the anti-Israel NGOs claim to be standing up against an “expulsion” of the Arabs in the area, this is simply a media stunt to paint Israel in a negative light. What this really would amount to – should the Defense Minister come out on the side of the courts, is an eviction of illegal squatters.“But won’t the Arabs be left homeless,” if Israel were to destroy the structures? First, let’s remember that most of the trespassers are homeowners in Yatta. In other words, they can simply go home. But even so, out of humanitarian concerns and leniency, Israel agreed to allot an alternate area to the residents of the encampment, on state land adjacent to Yatta. The Arabs rejected this generous offer, proving it’s not about providing adequate housing and a future for their children, but all about illegal encroachment on Israeli lands in area C of Judea.A similar strategy of Arabs illegally squatting and building on state land in area C is currently being implemented in other parts of Judea and Samaria by the Palestinian Authority with backing and funding from the European Union, to the tune of hundreds of millions of euros. The goal is to illegally create a unilateral de-facto Palestinian state in area C and avoid any future peace talks with Israel.Regavim has been working tirelessly to expose this deception both at Susiya and in other areas. The NGOs involved are transparent in their anti-Israel agendas by siding with the illegal builders who continuously belittle law enforcement and refuse all offers of compromise, while cynically exploiting the legal process to further illegal activities. It is highly doubtful that the legal system of the United States, Europe or any other country would conduct itself with such a high level of tolerance and patience in a similar case.So while some anti-Israel Jews are getting together to support the thieves, let’s hope our defense minster makes the right decision to halt the illegal activity at Susiya by taking down the illegal buildings, thus sending a message that in a democracy such as Israel, the established laws must be upheld.The writer is the international director of Regavim, a legal advocacy organization dedicated to ensuring responsible, legal and accountable use of Israel’s national land.