Standing up for Israel: An epiphany in stormy Kansas

Israel, a blessed land, is defended by the toughest tribe on earth. 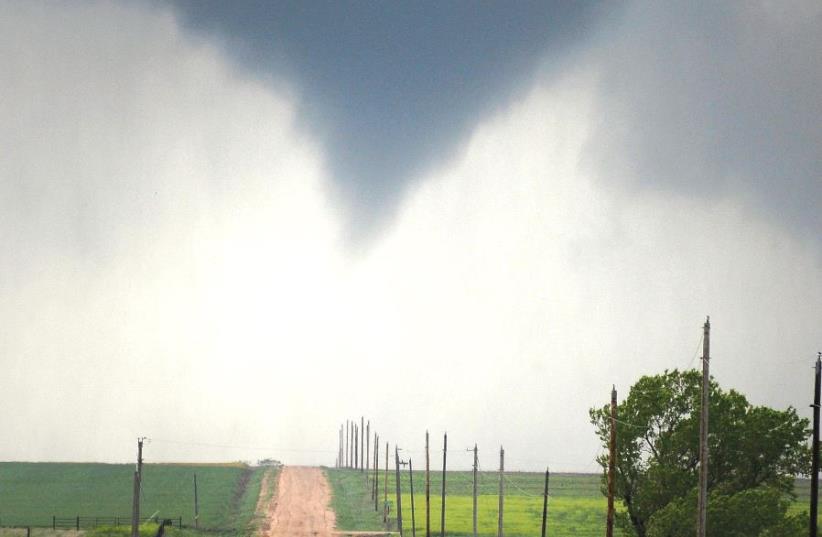 A TORNADO forms over the fields of Kansas.
(photo credit: REUTERS)
Advertisement
Until that steamy day in June, with tornadoes threatening the frontier garrison built on a bluff above the Missouri River, Israel was an abstraction, more ancient kingdom than modern state in the mind of a 10-year-old Irish-Catholic Army brat.My father, an infantry major, was graduating from the US Army Command and General Staff College at Fort Leavenworth, Kansas, with the 777-member class of 1967, including many veterans of the stepped-up combat campaign in Vietnam and officers from over 40 ally nations. Spring would soon give way to a season largely remembered in the US as the hippie-soaked “Summer of Love.” But for hundreds of mid-career officers in Kansas that year, it would become the “Summer of War,” as the Pentagon dramatically increased troop levels in the Southeast Asian conflict.My parents returned from the graduation ceremony in the late afternoon of June 9 as winds from the west began to pick up and the broad prairie skies darkened over the river basin. Before changing to head out to commencement celebrations, my mother took a breather in our cramped living room on the first floor of the narrow-base duplex housing two adults and six kids.The graduation exercises had been long and long-winded, she said, showing her usual mild disrespect for military protocol.But, she added, something remarkable had occurred. The audience politely applauded the foreign officers as they crossed the stage – including majors and colonels from many Arab countries. “Then a sole officer from Israel came up to receive his diploma and the whole auditorium rose with a roar to give him a standing ovation,” she said.She read my puzzled look. “Just this week, tiny Israel, surrounded by hostile countries, defeated the armies of three nations – against incredible odds.” The officers, she explained, were paying tribute to the Jewish nation and the Jewish People who had emerged from the Holocaust in Europe, built their own homeland and delivered a stinging defeat to those determined to drive them into the sea.An image of David in combat fatigues crossed my mind just as a horizontal rain began lashing at the windows. My mother, no fan of protocol, deeply admired pluck.She went upstairs to change. I turned around in the living room chair, and, my knees sinking into the cushion, leaned toward the window and watched the wind bend the trees stretching in a line from our yard toward the distant parade ground.Less than a year later, my father was buried at West Point, a casualty of Vietnam.My mother died 10 years ago. Just last week, 50 years since our sojourn in Kansas, I found my father’s Fort Leavenworth yearbook in a box and leafed through the pages, looking for the Israeli who had moved a corps of American officers to jump to their feet.“Lieutenant Colonel Abraham Orly, Airborne, Israel” was printed between the image of a handsome, mustachioed man in uniform and an image of the same man, smiling broadly, wearing a suit, with his wife and three children.A quick search revealed that “Avraham Orly” fought as a teenager in the War of Independence, became a paratrooper and eventually commanded the elite brigade.After leaving Fort Leavenworth, his career led to promotion to major-general and governor of the lands seized during the Six Day War. Orly died in 1981 at the age of 51.I never knew or met my father’s Israeli classmate but the details of his life confirmed the larger lesson brought to a generation of Americans old enough to remember the astonishing 1967 victory of Israel over its enemies: Israel, a blessed land, is defended by the toughest tribe on earth.That was my epiphany as well, an enduring insight acquired in the midst of a Kansas maelstrom, blowing east towards the parapets of Jerusalem.

The author is a writer and communications professional living in Boston, Massachusetts.
Advertisement
Subscribe for our daily newsletter