The ageless challenge of the Jerusalem Marathon

I find it fun to ask marathoners why they decided to do such a crazy thing. For me it was a combination of a challenge and a way of thumbing my nose at the Angel of Death. 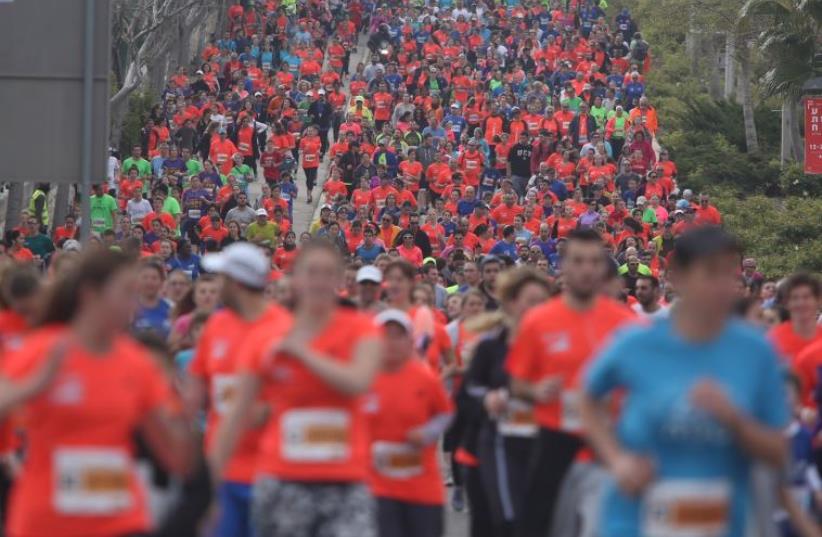 Sixth annual Jerusalem Marathon
(photo credit: MARC ISRAEL SELLEM)
Advertisement
Hey, I’ve got a great idea! I’m turning 60 this year... Why not run a full marathon – 42.2 km. – to celebrate? I’m still not entirely sure if it was a brilliant idea or an idiotic idea. My friends are divided between those who admire my athletic prowess and those who think I’ve lost my marbles.I find it fun to ask marathoners why they decided to do such a crazy thing. For me it was a combination of a challenge and a way of thumbing my nose at the Angel of Death: “I may be 60, but look at what I can still do.”My daughter and running buddy, Katherine, ran as part of a New Year’s resolution (made on Rosh Hashana) to be healthier. Some people figure that training for a marathon would be a great way to lose a bunch of weight. This might work if you’re trying to lose a lot of weight.But many of us find it impossible to lose a few pounds while training for a marathon, because you need so many carbs to keep you going.I heard a great story from a fellow runner in Friday’s race (while we were running!).Joshua Strahl had open heart surgery at Shaare Zedek in 2010. When he was recovering, a nurse asked him if he wanted a wheelchair to get over to the window. He said, “No, I’ll walk.” The window was his goal, and he made it to the window. He kept stepping up his goals post-surgery and has now run 18 marathons.Training for any marathon is monumental challenge.I’ve been a runner for over 40 years, but the difference in training for a marathon versus training for a half marathon or less is night and day. It’s an order of magnitude different in time and effort.Training for the Jerusalem Marathon, in particular, comes with extra challenges.First of all, there are the hills.You don’t notice it so much in a car, but there is no such thing as “flat” anywhere in Jerusalem. As Psalm 125 says, “As the mountains surround Jerusalem...”Back when the psalms were written, all of Jerusalem was inside the walls. Those “mountains” that “surround Jerusalem” are now where the modern city of Jerusalem exists.An article in Runner’s World magazine describes the course: “... the most difficult urban marathon I’ve ever run.My Garmin profile looked like an EKG: nothing flat, few straight sections and a total elevation gain/loss of around 2,300 feet.”Hills aren’t the only feature you have to think about when running in Jerusalem.There’s also the issue of “religious sensibilities.” Especially for women, running through ultra-Orthodox neighborhoods in shorts and a tank top is going to get some people upset.The marathon course carefully avoids both religious and Arab neighborhoods.And then there’s security.One of the routes I like to run goes around the Old City. I always think of Psalm 48 when I circumnavigate: “Walk about Zion and go around her; count her towers.”Unfortunately, since the latest round of stabbings started in October I no longer feel safe running in the vicinity of Damascus Gate. In addition to checking the weather before a run, I check the security situation.The last few days before a marathon are a strange experience for the uninitiated. It’s sort of the “anti-diet.”Marathon runners talk about a “wall” that many people hit sometime after 30km.Your body runs out of glucose, and your pace falls off and nothing you do will get your body moving faster. One way to avoid the wall is to stock up on carbs. So for a few days before a marathon, at the same time that you cut way back on running mileage to let your body rest, you start eating a diet that’s 85-90% carbs, and a lot of them. Beer, by the way, is a favorite among many distance athletes – you get carbs and hydration in one convenient package! Race day, Friday March 18, dawned with perfect conditions for a marathon. Temperatures at the start were around 8C – cool but not cold.With all the road closures, the logistics of getting to the start can be complicated. Fortunately, Katherine and I have motorcycles, so we were able drive right up to the Israel Museum and park 100m from the start.With 42 km. to cover, the marathon is a great tour of Jerusalem: both the Givat Ram and Mt. Scopus campuses of Hebrew University, residential neighborhoods, the Old City (in Jaffa Gate and out Zion Gate), Emek Refaim, the First Station, Haas Promenade.At 24 km. in – a point at which many runners first start feeling the distance – you cross Gei Hinnom, a.k.a. “Hell.”Running a marathon will introduce you to your body’s weak spots if you’re not already familiar with them.For me, it’s my hamstrings.For Katherine it’s her knees.They especially bother her on the downhills, so she quipped, “I bet I’m the only runner here who looks forward to the UPHILLS because they feel so much better.”I definitely did not look forward to the uphills, and I was wondering what kind of sadists the course designers were – including two significant hills in the last 4km of the race. That’s just mean! Finishing a marathon is a feeling unlike any other. The sense of physical accomplishment, relief that it’s over, while at the same time physically hurting everywhere is unlike anything else I’ve ever experienced. And once the race is over, it’s important to do more carb loading to restore your systems – and having burned over 3,500 calories, you feel entitled to eat whatever you please! Mimosas over lunch are a great way to rehydrate and restore carbs at the same time.The writer is a rabbi and businessman who lives and runs in Jerusalem. He’s looking forward to running the New York Marathon in November.