The German refugee crisis: Amplifying echoes of the past

The recent major influx of refugees and the many resulting challenges and problems have however also amplified echoes of the past. 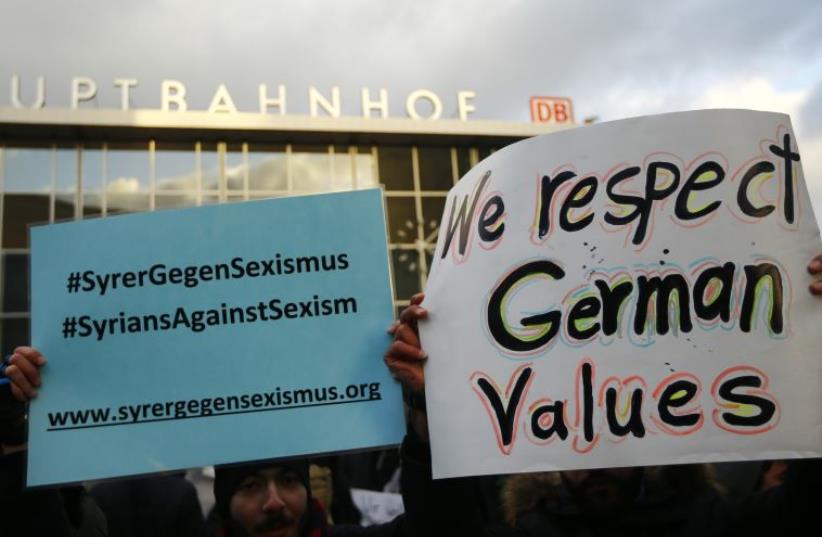 People from Syria hold placards reading 'Syrians against sexism' during a rally outside the main railway station in Cologne, Germany, January 16, 2016, where the vast majority of dozens of New Year Eve assaults on women took place.
(photo credit: REUTERS)
Advertisement
German Chancellor Angela Merkel explicitly linked the present with the past when she opened the country’s borders to refugees in September 2015, saying “I’m happy that Germany has become a country that many people abroad associate with hope...That is something very valuable, especially in view of our history.”The recent major influx of refugees and the many resulting challenges and problems have however also amplified echoes of the past.Although some elements have been expressed outright, part of this impression results more from interpretation of events. Self-directed “angst” has been a frequent phenomenon in post-war Germany for a number of decades. This is the fear, experienced by many Germans – often subconsciously – that there is something inherently warped in their nation’s character, in view of the atrocities committed by their ancestors under Nazi rule.A study at the end of last year shows that the volatile combination of the refugee crisis and terror attacks led to a major increase in “angst” about the future. In a poll in February 2016, 57 percent of respondents said that due to immigration Germany is becoming “a worse place to live in.” Fifty-three percent are of the opinion that “general cultural life will be undermined by the refugees.”German churches have come out unequivocally against an immigration quota for refugees. In the prewar years under the Nazi rule many church leaders supported the Nazis.Even Martin Niemöller, one of the best-known German Protestant anti-Nazis, delivered sermons under Nazi rule in prewar years teaching that the Jew was cursed because his ancestors killed Christ.After the war some German Protestant churches apologized for their failures toward the Jews under the Nazi regime. Through their current irrational position asking that no limit be set to the influx of refugees, German churches appear to be swinging toward the other extreme.German Catholic and Protestant churches also do not recommend that preferential treatment should be given to Christian refugees in the current influx. This is particularly extreme in view of the widespread persecution of Christians by Muslims in the Middle East. The stance of the churches on this issue is directly inverse to that of the highly controversial Pope Pius XII. His efforts to help Jews before and during the Holocaust were mainly focused on baptized Jews.Echoes of the past may also resonate in the claims that German police resort to excessive use of force.These accusations came into the limelight again recently, in the small town of Clausnitz. On the arrival of a busload of refugees, their passage was blocked by a crowd of 100 demonstrators, mainly locals. The police had difficulty in maintaining control and forcibly removed several people from the bus. A torrent of criticism has hit the police for the way it handled the incident. In response, the police stated that some people in the bus had provoked the demonstrators and heated up the situation.Many have condemned Frauke Petry’s recommendation that armed police should patrol the borders, with instructions to shoot as a last resort if needed to prevent refugees from entering. Petry heads the Afd (Alliance For Germany), a right-wing party which has been rapidly gaining support according to polls. Petry’s recommendation raised (largely incorrect) associations with the East German border police who shot at people attempting to flee toward the West. Polls showed that Petry was in a minority, yet also demonstrated that she was far from alone in her opinion.Twenty-nine percent of those polled supported the position that it was justified to use weapons to prevent unarmed refugees from crossing the border, while 57% opposed it.Merkel’s original statement that Germany symbolizes hope has become significantly tarnished in the light of the events of the past six months. A website which lists the attacks on present and planned asylum- seeker housing projects reported many incidents, including at least 10 arson attempts in the first three weeks of February alone. A recent case drew particular attention. Up to 30 drunken onlookers clapped and cheered as a fire broke out in a former hotel in Bautzen, Saxony. The building was being converted into a refuge for asylum seekers. In some anti-refugee demonstrations one can hear shouts of “Germany for the Germans” and “Foreigners out.”By late January Merkel stated, more on the lines of wishful thinking, that she expected that many refugees would go home once there is peace in their countries of origin.The top two candidates of her Christian Democratic Party in the upcoming elections of the federal states in Rhineland-Palatinate and Baden-Württemberg have now publicly come out against the open border policy, after having seen their support in the polls plummet.The Christian Social Union (CSU) is the Bavarian sister party allied with Merkel’s Christian Democrats.One of its leading members, Bavarian Finance Minister Markus Söder said that Germany needs “a national deportation plan.” He hoped that this year 350,000 of the new immigrants would be deported. All this may only indicate the beginning of a cascade of events likely to raise further associations with Germany’s problematic past for international observers, rather than enhance any visions of hope.Yet one more aspect is present in the current situation. In an attempt to compensate psychologically for its atrocious Second World War treatment of minorities – in particular Jews – Germany has now welcomed other minorities with wide-open borders. However, many of the newcomers are Muslims from countries which are among the most anti-Semitic in the world. This is more than just a diabolic twist of history, as it embodies the fear of real danger for Germany’s Jews.