The strength of that connectedness can build states and topple evil empires, and it can transform each of us, wherever we may be. 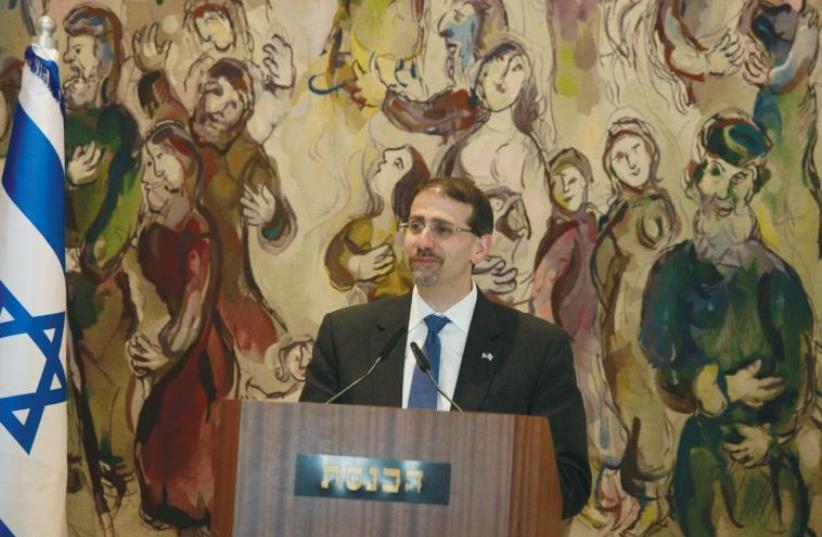 US Ambassador to Israel Dan Shapiro speaks in the Knesset with the Chagall murals behind him
(photo credit: YITZHAK HARARI)
Advertisement
I’m admiring Marc Chagall’s tapestries in the Grand Hall of the Knesset: Moses receiving the Ten Commandments and leading the people to the Promised Land.The background feels right for the event, a ceremony marking “the Jewish- American contribution to the Yishuv (pre-state Israel) and the state.” Speakers include the prime minister, the opposition leader, the American ambassador, the chairman of the Jewish Agency. Our host is MK Nachman Shai , chairman of the lobbies for US-Israel relations and for strengthening the Jewish people. A photo exhibition of America’s role, “Stripes, Stars and Magen David,” created by the Ruderman Program for American Jewish Studies at the University of Haifa, shows how American Jews stepped forward to help Israel.I’m basking in the rare sunlight of political consensus, both as an American Israeli and as the representative of 103-yearold Hadassah, the Women’s Zionist Organization of America, as nearly every speaker praises founder Henrietta Szold and Hadassah’s contribution to health and education.For Yuli-Yoel Edelstein the gratitude to America is personal. The Knesset speaker was thrown out of university and arrested on a drugs charge because he was teaching Hebrew to fellow Russian Jews. Sent to hard labor in Siberia, he might have been lost in the Gulag without the American- led struggle for Soviet Jewry. Jewish Agency chairman Natan Sharansky, the best-known Prisoner of Zion, echoes his sentiments. American legislators put on unbearable pressure on the USSR, but they were reacting to what Sharansky calls the army of “housewives and students” who set him free and made the USSR tumble.Which made me think of Judith and Raymond Bensusan, a retired British couple I met recently when they brought me their charming album to record highlights of family history.The movement to free the Jews of Russia was centered in the United States, but spread throughout the Diaspora. In 1971, “The 35,” the Women’s Campaign for Soviet Jewry, began working in the UK. But Judith, then a 19-year-old third-generation Jewish Englishwoman, didn’t know anything about it. “We didn’t even celebrate Passover,” she says. She was working in the events department of a hotel. Raymond Bensusan was the name of the young man who “chatted her up” when he came for a business appointment. She thought it would be fascinating to date an Arab.“Bensusan” turned out to be a Sephardi Jewish name. She and Raymond were married in the Spanish-Portuguese synagogue where his parents had wed. “The corner church would have suited me, too,” says Judith.In 1978, the Bensusans were running a London print shop and seeking a cheap holiday.They spotted an Intourist advertisement for a week in Russia, flights, full-board and Bolshoi tickets for $150.After impulsively booking, they had second thoughts about vacationing behind the Iron Curtain.A cousin offered to introduce them to acquaintances who had visited Russia.The two women – members of “The 35” – got right to the point. Would the Bensusans be willing to contact fellow Jews? “We said no,” says Judith. “We weren’t at all observant. We’d never been to Israel.What would we say to them?” But somehow the couple that had been jittery about visiting the Hermitage found themselves agreeing to clandestine meetings and avoiding the KGB.Judith bought a crossword-puzzle book and wrote names and phone numbers backwards in the squares. Their first assignation was at a train station. The contact had a newspaper rolled under his left arm. Password: shalom. They walked silently to his home.“We were so moved by the modesty and bravery of these Jews,” says Judith. “Our lives would never be the same.”Back in London they became activists, fund-raisers, agitators. Feeling foolish that they weren’t taking advantage of their freedom to observe Judaism that Russian Jews desperately sought, they bought Jewish books and began a journey from kashrut and synagogue attendance to Sabbath observance. When a friend died suddenly of cancer, they sold their business and took a trip around the world with their children, winding up in Israel.A Jewish Agency representative convinced them of the convenience of coming as immigrants. They received rooms at the Absorption Center in Mevaseret Zion.Thirty years later, they’re still living in that suburb near Jerusalem.When Chagall was approached to create his first oeuvre in Israel, the 12 synagogue windows at Hadassah University Medical Center, the eminent but long-assimilated artist living in France surprised the supplicants.“I’ve been waiting all my life to be called upon to do something for my people,” he said. He felt his parents leaning over his shoulder as he worked. Next he agreed to create the Knesset’s grand tapestry of Jewish history. Chagall wrote about these gifts to Israel. “I felt as though I had been born anew. No longer am I as I was.”“We’ve had such satisfying lives,” says Judith Bensusan. “Call it what you like – luck, good fortune, or Divine intervention.”I call it the electrifying power of fulfilling the pledge we all made at Sinai. The strength of that connectedness can build states and topple evil empires, and it can transform each of us, wherever we may be.