When you survive a terrorist attack, physical recovery is only the first step in the healing process, and something as simple as a pillow could prove to be a helpful companion for the rest of the way 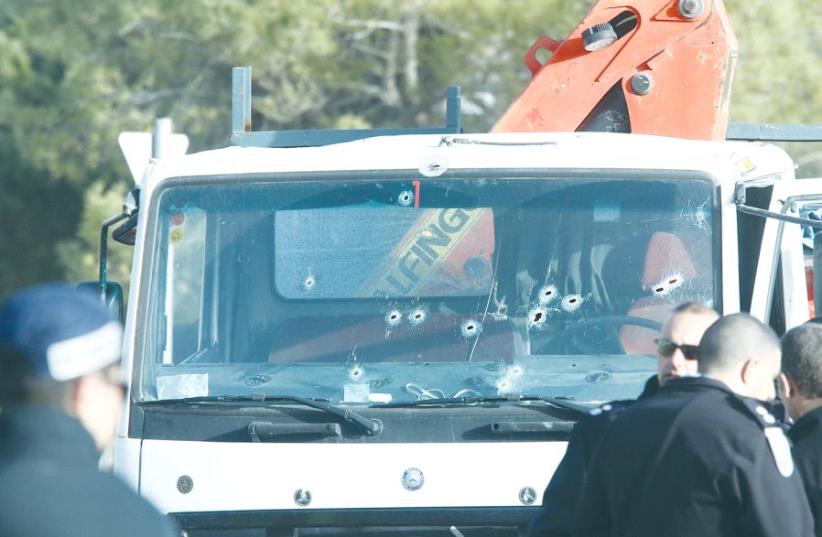 The truck that hit the soldiers, seen with some of the holes of the bullets that eventually stopped the attacker
(photo credit: MARC ISRAEL SELLEM)
Advertisement
I’m visiting Liron Talker in her hospital room. She’s feeling a little more cheerful because she’s going home. Her father holds up a plastic bag; inside is what remains of her army uniform, returned from the trauma center.“What do you want to do with it?” he says, voice thick, almost a whisper.On a sunny morning on January 8, Sec.-Lt. Liron Talker accompanied her cadets on an educational day trip in Jerusalem. Part of volunteering for leadership in the IDF means deepening your familiarity with and understanding of your homeland. Her cadets and others gathered at the Armon Hanatziv panoramic promenade in East Talpiot, the site where, according to tradition, Abraham and Isaac paused on the way to Mount Moriah. About 300 young men and women were in the parking lot.The guided tour was about to start.That’s when Fadi al-Qanbar, a father of four from the nearby Jebl Mukaber neighborhood, plowed his expensive flatbed truck into the crowd, ramming into and running over soldiers. He murdered four, including Liron’s cadet Lt. Shir Hajaj, 22, of Ma’aleh Adumim.Liron was one of the 21 young men and women who were hit. You didn’t see her in the news. She wouldn’t allow photos until someone gently told her grandmother about the incident.Her leg injury is healing. Home rest and physiotherapy are prescribed.“What do you want to do with the scraps?” her father repeats.“Throw them away! I never want to see it again,” she says, making an angry tossing gesture with her arm.“Wait a minute,” I hear myself say, although none of this is exactly my business.“Sometimes we throw things away too fast.”She might want an object from the attack, I think. Telling the story is part of the therapy.I hear myself volunteer to transform that torn IDF uniform into a memory pillow, marking her bravery and survival.A memory pillow, having nothing to do with memory foam, is a miniature version of a memory quilt – an ambitious craft project where, for example, outgrown baby clothes are turned into a decorative, nostalgic coverlet or wall hanging.I tell her about another pillow made from a certain leopard-striped comforter that once resided in our house. On what now seems almost like a fantasy day trip, my family and two friends visited one of our sons in his bunker on the Lebanese border. He had already been serving as an infantry officer in Lebanon for a long time, in many locations “inside.” We noticed that the leopard comforter had made its way to the army.Another officer was sleeping deeply in a bunk bed, wrapped in this shabby blanket.The lucky comforter returned with our son to civilian life. Years later, when he was already a father and professor, his wife insisted that the now threadbare and discolored mantle be retired.He posted a good-bye photo of the trademark comforter on a family email. Maybe I was inspired by that old Yiddish folksong “Hob Ikh Mir a Mantl” (I Had a Little Overcoat), about a garment that is downsized over the years, finally to a button. I thought of a pillow.My own craft skills are limited, but I knew exactly whom to enlist. Rivka Elder, whose son had also served as a officer in Lebanon, would understand. A retired Jerusalem teacher and long-time friend, she holds a bazaar every year to raise money for Keshatot, a wonderful school for children on the autism spectrum aged three to 13 in the Menashe region near Hadera. She knits and sews everything herself. Nearly every pillow I own is her handiwork. The shekels she raises are doubled by Apple Company’s Development Office in Haifa, where her son is an engineer. And so, the pillow, full of bittersweet memories, replaced the blanket and helped develop the incredible programs at Keshatot.Limor likes the idea of the pillow, especially the part about Keshatot; 79 children go to school there, and the latest fund-raising campaign is directed toward renovating the sand playground.I have volunteered Rivka without asking her, but of course she agrees. She launders out the grit and the tire marks.She irons the material. How to make this work? The IDF green can only be the base, she decides. She sews tall whimsical trees out of the army green, embroidering Liron’s name in delicate stitches.The first time I try to make arrangements to bring Liron the pillow, she isn’t home. Despite her injury, she’s returned for the officers’ graduation ceremony in Mitzpe Ramon.We decide to meet in Jerusalem at Mount Herzl; 30 days have already passed since the terrorist attack.A memorial ceremony is being held at the military cemetery for Shir Hajaj and the others: Lt. Yael Yekutiel, 20, of Givatayim, Sec.-Lt. Shira Tzur, 20, of Haifa, and Sec.-Lt. Erez Orbach, 20 of Alon Shvut.A crowd is already gathering. Liron, tall and beautiful, is walking up the hill, still using a crutch. “I’m feeling better,” she assures me.She and a fellow officer admire the pillow, exclaiming over the embroidery.Liron runs her fingers over the pants and military undershirt.“I have a new one,” she says, smiling, pointing to the shirt. She poses with the pillow. My hands are shaking so hard that it takes three tries to snap the photo with my phone.Slowly, she climbs the hill. She will meet the new officers, who will remember and honor their fallen colleagues.

■ The author is a Jerusalem writer and is the Israel director of public relations for Hadassah, the Women’s Zionist Organization of America. The views in her columns are her own.
Advertisement
Subscribe for our daily newsletter