The silencing of Army Radio

As Meretz MK Ilan Gilon put it, paraphrasing Heine: Where they have silenced poetry and poets, they will end up silencing people. 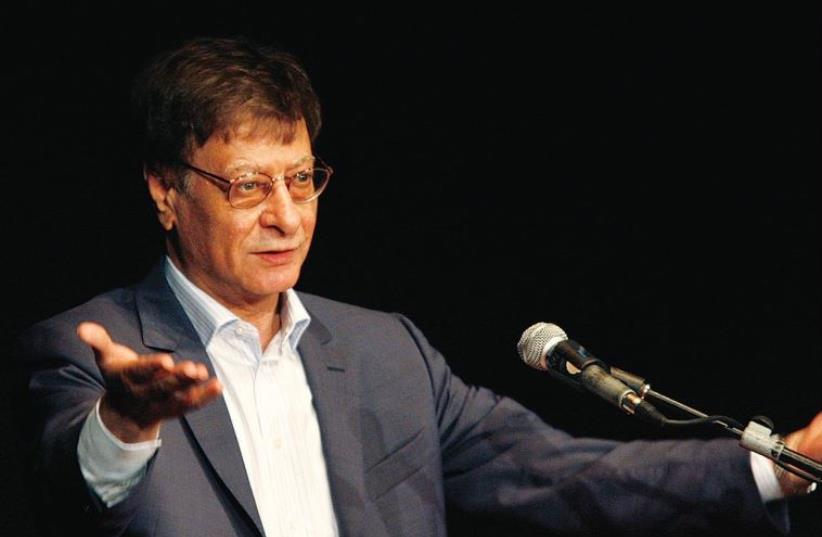 PALESTINIAN POET and journalist Darwish gestures during his show in Haifa in 2007.
(photo credit: REUTERS)
Advertisement
Write down! I am an Arab
And my identity card number
is fifty thousand
I have eight children
And the ninth will come after a summer
Will you be angry? So goes the opening stanza of Mahmoud Darwish’s poem “ID Card,” which caused a furor this week after Army Radio’s Broadcast University aired a program about the Palestinian national poet’s early and perhaps best-known work, written in 1964 when he lived in Haifa and Israel’s Arabs were still under military rule.

Its final stanza is as follows:
Therefore!
Write down on the top of the first page:
I do not hate people
Nor do I encroach
But if I become hungry
The usurper’s flesh will be my food
Beware..
Beware..
Of my hunger
And my anger! Not pleasant words, perhaps, for any Jewish Zionist Israeli to hear, and certainly not it seems for Defense Minister Avigdor Liberman, who took time off from the more pressing issues of his ministry this week to summon Army Radio head Yaron Dekel and demand an explanation as to why the station had aired the program.Liberman quoted from the final stanza of “ID card” when telling Dekel that there is a difference between freedom of expression and the freedom to incite. “Darwish called in his poems for the Jewish people to be expelled from the Land of Israel and wrote ‘The usurper’s flesh will be my food,’” Liberman told Dekel, adding that such a person could not be part of a the “founding texts of Israeli culture” – the title of the series in which the program was aired.Liberman told Dekel that the political echelon has “no intention whatsoever of intervening in the content broadcast by the station, but that the role of a military radio station in a complex democratic society such as Israel’s is to strengthen solidarity not widen rifts.”If you believe that.... the bit about not intervening that is...The truth is that Liberman, like Culture Minister Miri Regev, who kicked in by saying that Army Radio had “gone off the rails,” wants to shut down the station, which, despite being a military institution, paradoxically broadcasts some of the more liberal voices in the Israeli media.The defense minister in fact recently appointed his director-general, Udi Adam, to “evaluate the necessity of Army Radio’s continuing operation.” Adam’s recommendations are due to be submitted in September.Failing that, he would love to intervene in the station’s content, only he has been told pointedly by Attorney-General Avichai Mandelblit that he does not have the authority to meddle in Army Radio’s programming.Liberman, Regev and others in the government would like to silence voices that do not fit their narrative. As Liberman’s predecessor, Moshe “Bogie” Ya’alon, quipped, “Finally Army Radio will be broadcasting some truth. Truth in Russian is ‘pravda.’ Pravda is a Russian newspaper that in Soviet times was the Communist Party mouthpiece.Liberman might have learned something had he tuned into the program, which can be streamed online in Hebrew on the Army Radio website Al-Tayeb Ghanayem, a journalist and lecturer at Beit Berl college – incidentally named after Berl Katzenelson, one of the intellectual stalwarts of Labor Zionism – eloquently puts Darwish’s work in the context of a defeated angry society living under military rule and explains the poet’s complex relationship with Israel.I spoke to Ghanayem, to get his thoughts on the storm kicked up by his lecture.“It testifies to a very shallow level of culture in Israel when it comes to Arab and Palestinian literature,” he says. “The response reinforces stigmas and distances Israelis from being exposed to ‘the other’..... The works of Mahmoud Darwish, even though he was translated into Hebrew, have come across an Israeli refusal to read him, to study him, to delve into his work, to go into it in depth and not too read it as ‘know your enemy.’” Speaking after the political machination that ousted Ya’alon from his job at the Defense Ministry in May, former prime minister Ehud Barak warned that he identified seeds of fascism in Israel’s government, while former defense minister Moshe Arens warned that a political earthquake is in the offing and that the law of unforeseen consequences is at work.Those seeds it seems are now sprouting roots. The ground is trembling and consequences are taking shape. As Meretz MK Ilan Gilon put it, paraphrasing Heine: Where they have silenced poetry and poets, they will end up silencing people.
Advertisement
Subscribe for our daily newsletter