We have to remain focused on what is of paramount consequence: purchasing property and taking up residence, first of all in the Old City. 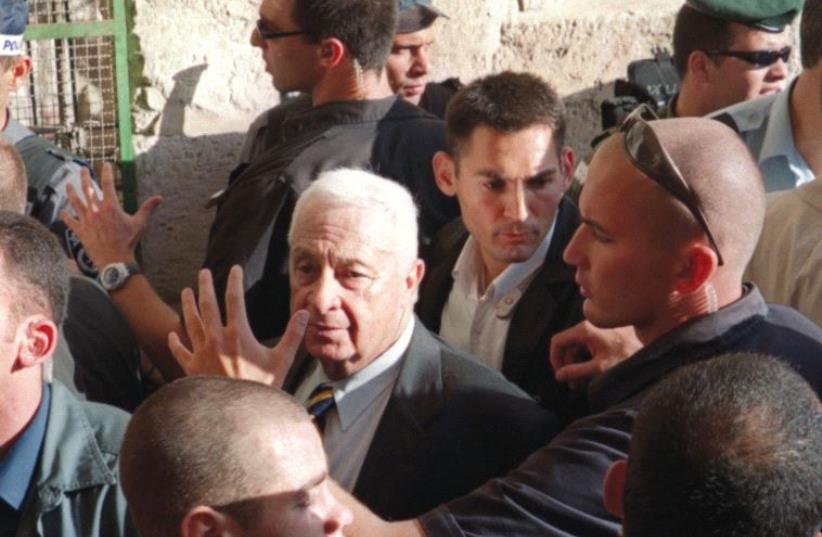 ARIEL SHARON visits the Temple Mount in 2000.
(photo credit: REUTERS)
Advertisement
On September 28, 2000, I accompanied my father on a visit to the Temple Mount in an act of protest against then-prime minister Ehud Barak’s intention to cede the site to the Palestinians. Arik was firmly opposed to such a move and so was I, along with the vast majority of the population, a fact borne out by the results of every election since.We entered through the Mughrabi Gate, with Arik at the head of a small group consisting of Knesset members from the Likud who had chosen to join him and an official from the Israel Antiquities Authority. The visit was secured by hundreds of police officers. In fact, I saw a great many more policemen than Arab demonstrators. What kind of sovereignty do we wield if such a large security detail is required for a visit to the open courtyard of the Temple Mount? I found the whole scene upsetting. The police didn’t conduct themselves with the confidence of representatives of the sovereign power, but with an uncalledfor tentativeness. A single British sergeant on a mule, armed with no more than a baton, governed a whole district on his own. For the British, Jerusalem was just part of some remote colony, but not for us; it has been our capital for 3,000 years. And yet, we don’t behave as if it belongs to us.“What do we need this whole Vatican for?” Moshe Dayan asked after the Six Day War, expressing total disregard for Jewish sensibilities. He and prime minister Levi Eshkol were incredibly short-sighted. Instead of putting a suitable arrangement in place, they left us stuck with the Wakf to this day in an unacceptable status quo that is extremely difficult to change. Yitzhak Rabin’s government was also seriously misguided when it granted the Jordanians special status in Jerusalem. Why are they entitled to this privilege? Because they conquered Jerusalem in 1948, razed the Jewish Quarter along with its synagogues and denied Jews access even to the Western Wall for 19 years, until the city was liberated by the Israeli army in the Six Day War? To maintain control of the Temple Mount, we have to maintain control of the entire Old City, in perpetuity. Anyone who thinks this is what’s going to impede a peace agreement doesn’t know what part of the world they live in. An accord that establishes the kind of neighborly relations enjoyed by the Scandinavian countries is not going to happen here. We can’t forget that Jerusalem is the reason we live in Israel rather than Uganda or anywhere else. With all due respect to Rishon lezion, and even Tel Aviv, they have not been the object of Jewish prayers for generations on end.The total area of the Old City is less than one square kilometer. It is both a religious and a national Zionist imperative that we purchase properties throughout this space. The more we do that, the more the untenable idea of divvying up the Old City will be abandoned by the handful of people who still believe in it. It’s not a daunting task for a nation like us, is it? It won’t take much effort to accomplish. Ateret Cohanim, headed by Matti Dan, are already doing this holy work. I have had the honor of being in close contact with these good people for many years, helping however I can. I am thus following in the footsteps of my parents, who, during Hanukka in 1987, moved into an apartment on Hagai Street in the Old City, which today serves Ateret Cohanim, affording Jews safer passage from the Damascus Gate to the Western Wall.If we want to maintain control of the Old City, we also have to control its perimeter. We have to populate sectors of the American Colony, Mount Scopus, Mount of Olives, Kfar Hateimanim, the City of David and Abu Tor. Just as there are different levels of holiness, so there are different levels of importance.Not everything carries the same weight.Contending that all things are equally important means that nothing is really important. Those who attribute the same significance to the Shuafat refugee camp or Kafr Akab as they do to the Western Wall are not raising the value of these hotbeds of hatred, but rather devaluing the Western Wall. We have to remain focused on what is of paramount consequence: purchasing property and taking up residence, first of all in the Old City.We need to do what we need to do; the rest will work itself out.

Translated from the Hebrew by Sara Kitai, skitai@kardis.co.il.
Advertisement
Subscribe for our daily newsletter