The watered-down US Embassy relocation bill

The question remains as to whether the US will ever recognize Jerusalem as part of Israel. 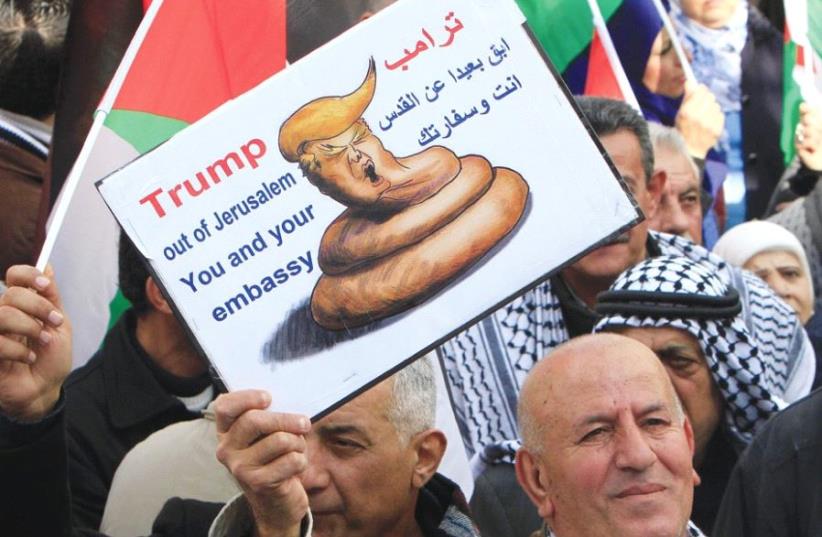 PALESTINIANS PROTEST in Nablus on Thursday against a promise by President Donald Trump to relocate the US Embassy to Jerusalem.
(photo credit: REUTERS)
Advertisement
I was covering events in the US capitol when Congress passed the US embassy Jerusalem relocation bill in October 1995, also known as the “Jerusalem Embassy and Recognition Act.” There were expectations at the time that the US would renounce its position, adopted in 1948, that Jerusalem was not to be recognized as a part of Israel, along with the additional position, also dating from 1948, that Jerusalem, all of Jerusalem, must be an international zone.However, the final version of the Jerusalem Embassy and Recognition Act removed explicit references to Jerusalem as a part of Israel and did not mention that Jerusalem would remain an exclusive capital of Israel. Faisal Husseini, in Washington, DC, at the time as the head of the PLO Jerusalem committee, and Yossi Beilin, then deputy foreign minister of Israel, endorsed the Jerusalem Embassy and Recognition Act in 1995, as it was worded.In other words, the US embassy relocation act did not violate two cardinal US premises from 1948; that Jerusalem was not to be recognized as a part of Israel, and that Jerusalem could still become an international zone.The realities of the Jerusalem Embassy and Recognition Act were not lost on American citizens whose children were born in Jerusalem and whose children’s US passports said “Jerusalem,” with no country listed, as their place of birth. For that reason, Jerusalem Americans initiated class action suit which reached the US Supreme Court last year, with a demand to stamp “Israel” on their passports – and they lost, because America’s highest court would not challenge US diplomatic policy.As to the vocal Arab resentment and loud Jewish enthusiasm over the possible implementation of the Jerusalem Embassy and Recognition Act under President Donald Trump, it is doubtful that either side has read the wording of the legislation.As to the PLO threat that Jerusalem will burn if the embassy moves, I covered the packed Faisel Husseini press conference in 1998 when the PLO warned that Jerusalem would burn if Jews moved into Har Homa. 19 years later, Har Homa thrives and no fires flicker on that hilly Jerusalem neighborhood.Meanwhile, US citizens who want the US to recognize Jerusalem as a part of Israel may wish to advise Congress and White House that legislative changes may be in order. If there are US citizens who want the US to recognize Jerusalem as the exclusive capital of Israel, which no other entity can also claim as its capital, legislative change may be in order.The US adopted an official policy in 1948, in the months that preceded the War of Independence, declaring that Jerusalem must be defined as an international zone under US trusteeship, and remain extraterritorial to Israel. The US State Department went so far as to appoint its own governor for Jerusalem. The assassination of the UN envoy to Jerusalem in September 1948 suspended that process, but did not cancel US policy.A case in point: the family of a US citizen, Ben Blutstein, killed by a terrorists bomb in July 2002 while eating lunch in the Frank Sinatra cafeteria at the Hebrew University, could not get the US State Department to allow his US death certificate to read “Jerusalem, Israel.” The US same policy applies to birth certificates.Four of my children were born in Jerusalem. The birthplace on their American birth certificates is listed as “Jerusalem,” with no mention of any nation.The question remains as to whether the US will ever recognize Jerusalem as part of Israel.Such a policy decision would be seem more crucial than the symbolic matter of moving the US embassy to Jerusalem.

The author, a native of Philadelphia, has lived in Israel since 1970.In 1987, he established the Israel Resource News Agency at the Center for Near East Policy Research Center to guide journalists and diplomats in Jerusalem. His latest book, Inside the PLO: the Genesis of the Palestinian Authority, was published by Amazon on February 1, 2017.www.IsraelBehindTheNews.com
Advertisement
Subscribe for our daily newsletter