Israel welcomes President Sergio Mattarella, and the celebration of the friendship between the two countries could not have happened at a more fitting time. 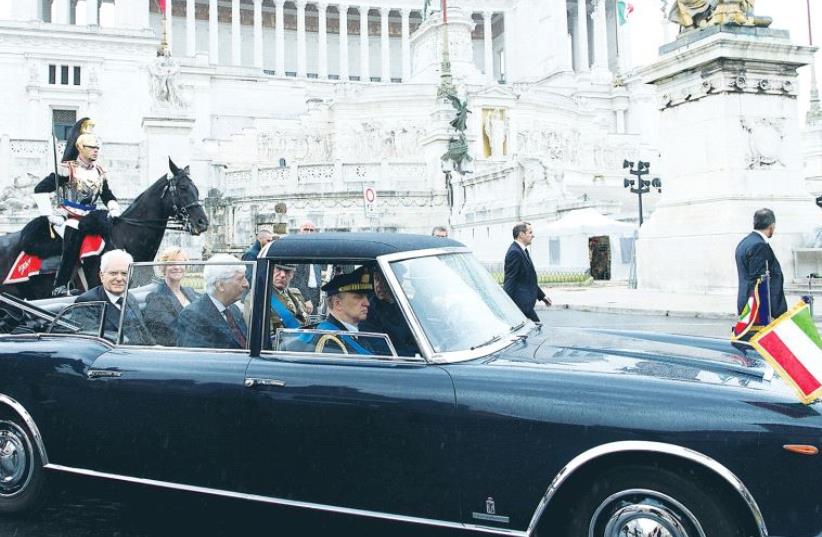 ITALIAN PRESIDENT Sergio Mattarella is escorted by presidential guards as they pass in front of Vittoriano’s monument during the Republic Day military parade in Rome in June.
(photo credit: REUTERS)
Advertisement
On Sunday, October 30th, the president of the Italian Republic Sergio Mattarella arrived in Jerusalem for his first official visit to Israel since he took office in January, 2015.Over the course of his four-day visit, Mattarella will visit Yad Vashem and meet with his Israeli counterpart Reuven Rivlin, as well as with Prime Minister Benjamin Netanyahu. His trip will also add several elements to the traditional itinerary of most state officials in Israel. For example, President Mattarella will visit Mount Herzl, where he will pay his respects to the grave of Shimon Peres; he will plant a tree in the KKL-JNF Grove of Nations; he will visit the Italian Synagogue and Museum in Jerusalem, in addition to giving a lecture at the Hebrew University, on the occasion of the opening of the academic year (Mattarella will also spend a day in the Palestinian territories, where, among other things, he is going to meet with the Palestinian Authority President Mahmoud Abbas).The time to celebrate the bond between the two countries couldn’t be more fitting. While the cultural and economic ties between Italy and Israel continue to grow and blossom, a few days ago Italian authorities took a very important stance to stand by Israel also in one of the most challenging fields for the Jewish state: its position within the international organizations that, as the Italian government has highlighted itself, have often proven to bear an inherently anti-Israel bias.“It’s incomprehensible, unacceptable and wrong,” Prime Minister Matteo Renzi, leader of the center-left Democratic Party, told RTL 102.5 radio in an interview, referring to the UNESCO resolution that failed to acknowledge the ties between Jerusalem and the Jewish people. The resolution passed with 24 votes in favor, six opposed, and 26 abstentions, including Italy. But afterwards, Renzi promised that Italy’s approach is going to change.“I expressly asked our people to immediately cease maintaining these positions. We can’t continue with these motions designed to attack Israel. If there is to [be a] break out of European unity because of this, then so be it,” he said.What is the reason for such a change of heart? Over the course of his political career, Renzi has constantly offered his friendship to Israel, showing sympathy toward its problems and appreciation for its qualities. The decision to abstain at UNESCO, many analysts pointed out, was taken at lower levels, by officials of the foreign ministry who simply did what had always been done, as Renzi admitted himself.A crucial role in the matter was also played by Italian Jews. After the vote, many Italian Jewish leaders were very vocal, and worked hard to raise awareness of the issue in the general public. When he asked Renzi about the UNESCO resolution, the radio journalist cited an op-ed by the president of the Union of Italian Jewish Communities, Noemi Di Segni, which was published in major Italian daily La Stampa. In the op-ed, Di Segni, who is also accompanying Mattarella on his visit to Israel, had highlighted how Italy’s abstention at UNESCO had hurt Italian Jews.“Italy and Israel today walk side by side and face many challenges together,” Di Segni wrote.“Their relationship is made of a never-ending flux of people, ideas, projects which strengthen the mutual commitment to the general public and to its economical, intellectual and spiritual welfare. Their common history features several millenniums, Judaism and Christianity, Jerusalem and Rome, two capitals of the Mediterranean civilization. It bears witness [to] an encounter full of contrasts at times, but also rich of history, events, hopes sometimes betrayed, and achievements, often miraculous. For this reason, Italian Jews, and together with them all citizens who believe in truth, act in good faith and transparency, and trust democratic institutions, have been shocked and hurt by Italian attitude at the UNESCO,” read the op-ed.The Italian Jewish community is the most ancient minority in the country, where its presence dates back over 2,000 years. The importance of present Jewish life, as well as of Jewish heritage in Italian history is increasingly acknowledged at national and local level. To name a few examples, the Italian government has been funding the building of the national Museum of Italian Judaism and the Shoah in Ferrara, (the minister for cultural heritage, Dario Franceschini, will be in Israel Tuesday to present the project at the Eretz Israel Museum together with Mattarella).Only last week they announced the renovation of the Jewish catacombs of Villa Torlonia in Rome. Moreover, the Italian government has allocated several million euros to translating the Talmud into Italian, recognizing the added value that the Jewish culture brings to Italy also in the contemporary world.Italian Jews are also deeply Zionist. Their relevance within Italian society is one of the factors of the dynamics that have been transforming Italy in one of Israel’s closest allies in the European Union.During his inaugural speech two years ago, addressing the threat of international terrorism, president Mattarella chose to remember Stefano Gaj Tachè, a twoyear- old Roman Jewish boy killed in an attack by a Palestinian terrorist on October 9, 1982. A powerful remark, also because back then the Jewish community had felt betrayed and abandoned by Italian authorities. The attack came after many months of aggression and pressure toward Italian Jews both in the press and on the streets amid the tensions against Israel for the First Lebanon War. Often it was demanded of Italian Jews that they dissociate themselves from the Jewish state.Thirty-four years later, the concurrence of a government that declares its willingness to take the lead in shifting the attitude toward Israel in international forums and the visit to Jerusalem of a president who started his tenure by honoring a Jewish boy killed by terrorists could mark the official beginning of a new era.

The author is an Italian journalist.
Advertisement
Subscribe for our daily newsletter